State of Incident Command: 9/11 Gave Us the System to Succeed, Wildland Fires Model How to Succeed

Following the 2001 9/11 terrorist attacks, President George W. Bush in 2003 directed all federal agencies to use the National Incident Management System (NIMS), which also included the use of the Incident Command System (ICS) in the coordination and response to all national emergencies. The NIMS mission areas are prevention, protection, mitigation, response and recovery to terrorist attacks, major disasters, and other emergencies. Implementation required all levels of government throughout the nation to respond efficiently and effectively together under a common coordinated process. For many disasters this change has profoundly improved and changed the ability for local, state and federal agencies to work together with a common set of objectives. Yet it only works if it is fully used and, more important, it only works if there are decisive effective leaders commanding the disaster.

Long before 9/11, the Southern California wildland firefighting agencies (CAL FIRE, Cal OES, L.A. County Fire, L.A. City Fire, Ventura County Fire, Santa Barbara County Fire and the U.S. Forest Service California Region) had developed the Incident Command System. By 1982 it was universally used throughout the state on all wildland fires and gaining traction on every type of emergency. By the 1994 Northridge earthquake it was being used on all types of disasters. But the success of commanding wildland fires particularly works because other foundational elements are in place. These key elements include:

Every wildland firefighter from the moment they don their uniform is receiving training on their role in the system. As they move through the ranks more and more training is provided and their responsibilities in the organization increase. For those willing, and there are not many, to take on the ominous responsibility of becoming an incident commander, it often takes 25 years to achieve.

A visit to an incident base on a major wildland fire is eye-opening in the magnitude of the operation. It is common to have 2,000 to 8,000 firefighters on a single incident. All receive a briefing, a daily incident action plan, air operations summaries, digital maps with satellite-gathered infrared heat signatures of where the fire accurately is and heading. Spot weather forecasts from an onsite meteorologist. Breakfast and dinner are served hot every day, fuel and repairs for their equipment are provided, a place to sleep is designated, replacement tools are available, showers and laundry are onsite. Every firefighter knows who they work for, where they are assigned and what frequencies to operate on. When injuries occur, and they always do, a medical plan on how to evacuate the injured is at the ready. There is no misunderstanding of where each firefighter fits into the system and no wasted effort on explaining basic organizational structures or cultures. This does not happen automatically. It happens because the systems and process have long been in place and the leaders in charge know how to implement them.

The system still relies on people. The people in command always make the difference on success. Firefighters will always come to an incident wanting to succeed. If the IMT is leading effectively, lives will be saved and property will be protected during the firefight even during the most destructive fire conditions when all seems lost. 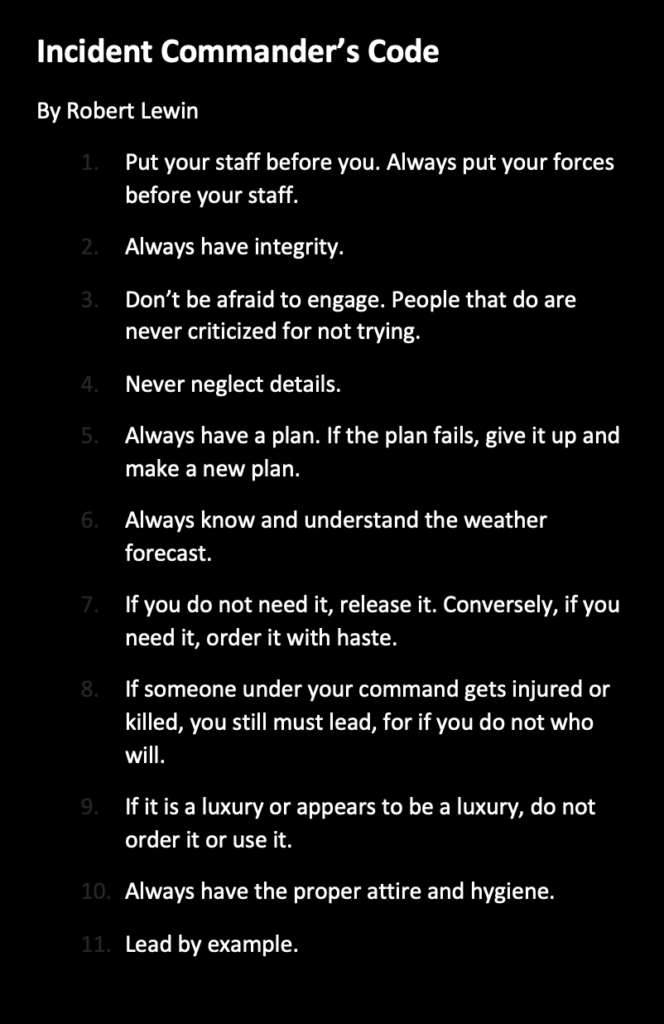 Leaders making decisions during an emergency is unlike any other time. During non-emergencies, decisions are made with limitless amounts of time and doing nothing does not result in tragedy. Even when there are deadlines, they are usually self-imposed and can be kicked down road. But, in an emergency, time is moving toward the disaster, and disaster is coming at you. The storm will arrive, the fire behavior will increase, the building will collapse, the river will rise, the astronauts will run out of power and oxygen.  But just making a decision is not enough: It requires leadership that is capable of quickly consuming large amounts of intelligence to make decisions and then the ability to move an organization to the best execution of that decision.

Failure Is Not an Option

In the Gene Kranz memoir Failure Is Not an Option and portrayed in the movie “Apollo 13,” everything seems to be going bad and there is mounting fear of the astronauts’ ability to survive and return to earth. As the flight director of the entire mission, Kranz sees that the team needs to get focused. He knows they have the ability to find solutions, but he must first remove all doubt and unite everyone as a team focused on the objective of getting the astronauts home. He famously states to his people, “I want everyone to alert your support team. Wake up anyone you need and get them in here. Let’s work the problem, people.” He not only articulates, but he also conveys an attitude that failure was not an option. That what needs to be done, will be done.

Long before the Apollo 13 near-tragedy, often referred to as a “successful failure,” Kranz was disciplined in learning every detail and aspect of all the systems and creating checklists and contingency plans. He trained his people and he rigorously tested them and himself. Yet he also was not afraid to let go of a plan when it was no longer relevant. At one point in a planning meeting, portrayed by actor Ed Harris in the movie, he clearly states “I want you all to forget the flight plan” and then physically tosses it away, showing the team that the old plan is no longer in play. Always looking ahead, he constantly is demanding contingency planning focusing on every aspect and detail. He has absolute dedication to the mission and understands the gravity of every decision he and his people make, while not shying away from making them. This is a model of a successful incident commander.

Action must be taken to change the outcomes. Incident commanders never have the fortune of hindsight and are always wishing they knew more. If they get it right, the team is responsible; if they get it wrong, the incident commander is responsible. If you spend treasure and resources and, in the end, nothing happens you may be called Chicken Little for saying the sky is falling. If it happens the way you predicted, you may be lauded and called Paul Revere for your foresight, but within days you will be questioned why you did not do more.  Taking the right action with what you know, even if it is limited, must be done. The luxury of knowing more will never be available within the time you need it.

Successful incident commanders have a culture of action. Franklin Roosevelt said, “It is common sense to take a method and try it; if it fails, admit it frankly and try another. But above all, try something.” The wildland fire community has an overriding principle embedded in its 10 Standard Firefighting Orders that all firefighters must memorize: “Fight fire aggressively, having provided for safety first.” Anything short of that leads to defeat. This culture is not just for the dirty-faced firefighters, it is embedded in everyone in the agencies with responsibility to fight fire. The culture is fragile so it must be continually cultivated.

Aspiring to be a good incident commander demands internal fortitude and commitment. Sleep is always in short supply. Most of the time a commander will not see sleep for the first 24 to 48 hours. Complaining or showing tiredness is not acceptable. Before a briefing a quick shave, a tucked-in uniform and an upright posture will show others strength when all may seem hopeless.

An incident commander must feel and show compassion and respect for those working for them. They must protect them while also demanding what may seem impossible. They must put the mission and their people before themselves. All the while ensuring the troops have all the tools necessary to succeed.

The climate-induced disasters that are occurring across the country are pushing our incident commanders and other emergency response leader harder than ever. 9/11 provided us a solid national system to manage disasters, but we need the other foundational systems in place. We need constant and rigorous training. We need detailed cooperative agreements. We need efficient processes for resource ordering and procurement. We need a culture of can-do where failure is not an option. We need leadership and management skills across the country that are as well-honed as a seasoned wildland fire incident commander. After 9/11, President Bush recognized a big change was needed by establishing NIMS; we need to learn it and focus on how we can improve if we are going to meet the demands of an unforgiving world of climate-induced disasters.