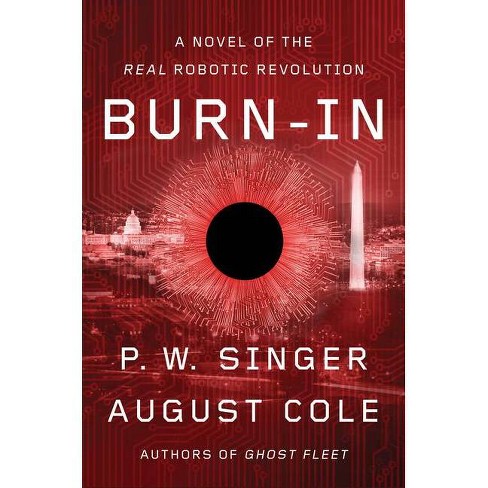 We hear a lot about “artificial intelligence” and robotics, automation and other technologies that are more mainstream every day. But how will these actually play out for law enforcement? Join us to hear an exciting story — filled with technology facts, woven into an exciting thriller written by one of America’s Top 100 in security and defense. The Smithsonian named him as one of the nation’s 100 leading innovators, Defense News as one of the 100 most influential people in defense issues, Foreign Policy named him to their Top 100 Global Thinkers List, and he was named an official “Mad Scientist” for the U.S. Army’s Training and Doctrine Command.

An FBI agent hunts a new kind of terrorist through a Washington, DC, of the future in this groundbreaking book – at once a gripping technothriller and a fact-based tour of tomorrow.

America is on the brink of a revolution, one both technological and political. The science fiction of AI and robotics has finally come true, but millions are angry and fearful that the future has left them behind.

After narrowly stopping a bombing at Washington’s Union Station, FBI Special Agent Lara Keegan receives a new assignment: to field-test an advanced police robot. As a series of shocking catastrophes unfolds, the two find themselves investigating a conspiracy whose mastermind is using cutting-edge tech to rip the nation apart. To stop this new breed of terrorist, their only hope is to forge a new type of partnership.

Burn-In is especially chilling because it is something more than a pulse-pounding read: every tech, trend, and scene is drawn from real world research on the ways that our politics, our economy, and even our family lives will soon be transformed. Blending a techno-thriller’s excitement with nonfiction’s insight, Singer and Cole illuminate the darkest corners of the world soon to come.

Join us with author Peter Singer as we explore the realities of the future through the fiction of a novel.

Peter Warren Singer is Strategist at New America. He has been named by the Smithsonian as one of the nation’s 100 leading innovators, by Defense News as one of the 100 most influential people in defense issues, by Foreign Policy to their Top 100 Global Thinkers List, and as an official “Mad Scientist” for the U.S. Army’s Training and Doctrine Command. Peter is the author of multiple best-selling, award winning books. No author, living or dead, has more books on the professional military readings lists. His non-fiction books include Corporate Warriors: The Rise of the Privatized Military Industry, Children at War, Wired for War: The Robotics Revolution and Conflict in the 21st Century; Cybersecurity and Cyberwar: What Everyone Needs to Know and most recently LikeWar, which explores how social media has changed war and politics. It was named an Amazon and Foreign Affairs book of the year and reviewed by Booklist as “LikeWar should be required reading for everyone living in a democracy and all who aspire to.” He is also the co-author of a novel new type of novel, melding the format of a technothriller to communicate nonfiction research. His first Ghost Fleet: A Novel of the Next World War which was both a top summer read and joined the professional reading list of every branch of the US military, leading to briefings everywhere from the White House to the Pentagon. His latest is Burn-In: A Novel of the Real Robotic Revolution. Out on May 26, it has been described by the creator of Lost and Watchmen as “A visionary new form of storytelling—a rollercoaster ride of science fiction blended with science fact.” and by the head of Army Cyber Command as “I loved Burn-In so much that I’ve already read it twice.”

His past work include serving at the Office of the Secretary of Defense, Harvard University, an editor at Popular Science magazine, and as the founding director of the Center for 21st Century Security and Intelligence at Brookings, where he was the youngest person named senior fellow in its 100 year history.