The executive order acknowledges that "many Americans continue to seek full accountability for the horrific attacks," and Americans "deserve to have a fuller picture of what their government knows about those attacks." 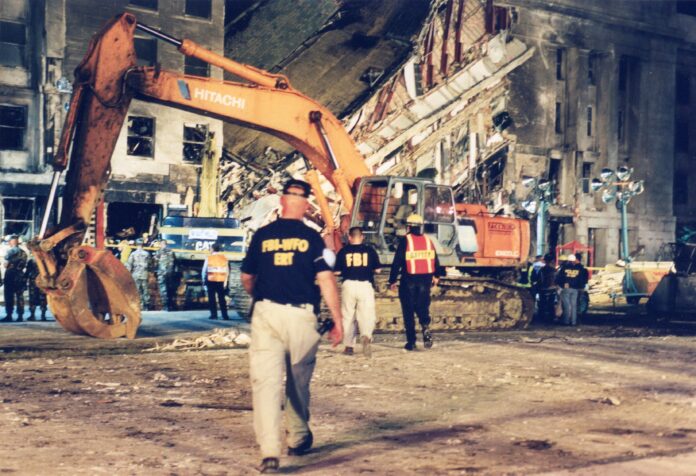 President Biden issued an executive order today directing the Justice Department to oversee a declassification review of documents related to the FBI’s investigation into the 9/11 terror attacks.

Under the order, Attorney General Merrick Garland will be required to release documents approved for declassification over the next six months.

“We must never forget the enduring pain of the families and loved ones of the 2,977 innocent people who were killed during the worst terrorist attack on America in our history,” Biden said in a statement. “For them, it was not only a national and international tragedy. It was a personal devastation. For 20 years, children have grown up without parents and parents have suffered without children. Husbands and wives have had to find a way forward without their partners in life. Brothers and sisters, uncles and aunts, loved ones and friends have celebrated 20 years of birthdays, family gatherings, and milestones looking at an empty chair at homes and with a hole in their hearts.”

“My heart continues to be with the 9/11 families who are suffering, and my administration will continue to engage respectfully with members of this community,” he added. “I welcome their voices and insight as we chart a way forward.”

A month ago, nearly 1,800 family members of 9/11 victims, first responders, and survivors asked Biden to skip 20th anniversary events at the attack sites unless he followed through on the release of documents that they believe implicate Saudi officials. “We cannot in good faith, and with veneration to those lost, sick, and injured, welcome the president to our hallowed grounds until he fulfills his commitment,” they wrote.

The executive order acknowledges that “many Americans continue to seek full accountability for the horrific attacks,” and Americans “deserve to have a fuller picture of what their government knows about those attacks.”

“Although the indiscriminate release of classified information could jeopardize the national security — including the United States Government’s efforts to protect against future acts of terrorism — information should not remain classified when the public interest in disclosure outweighs any damage to the national security that might reasonably be expected from disclosure,” the order adds. “The significant events in question occurred two decades ago or longer, and they concern a tragic moment that continues to resonate in American history and in the lives of so many Americans. It is therefore critical to ensure that the United States Government maximizes transparency, relying on classification only when narrowly tailored and necessary.”

“Thus, information collected and generated in the United States Government’s investigation of the 9/11 terrorist attacks should now be disclosed, except when the strongest possible reasons counsel otherwise.”

The declassification review will include by Sept. 11 FBI electronic communication dated April 4, 2016, from the subfile investigation described in chapter V of the 2015 Report of the Congressionally-directed 9/11 Review Commission to the Director of the FBI. Within 60 days, the review is supposed to be completed for “all other records that previously were withheld as classified, in full or in part, during discovery in In re Terrorist Attacks on September 11, 2001,” and 2021 FBI electronic communications closing the subfile investigation.

Within 120 days, declassification review is expected to be completed on “all interview reports, analytical documents, documents reporting investigative findings, or other substantive records (including phone records and banking records, if any) from the FBI’s initial investigation of the 9/11 terrorist attacks — known as the Pentagon/Twin Towers Bombings (PENTTBOM) investigation — that reference the individual subjects of the subfile investigation and may be found through search terms, keyword identifiers, and other diligent means.”

Garland or other relevant agency heads will have the discretion to decide “whether the public interest in disclosure of the information outweighs the damage to the national security that might reasonably be expected from disclosure.”

Each declassification review will culminate in reports to the president and congressional intelligence committees that include “a justification for each decision not to declassify information pursuant to such reviews.”