PERSPECTIVE: The English Voice of ISIS Speaks Out Against the Group

Khalifa, being a high-level part of the media arm of the terror group, lived a privileged and protected life inside ISIS.

Mohammed Khalifa, also known as Abu Ridwan al-Kanadi, made headlines in 2019 when he was identified as the man who provided the English voiceovers for ISIS’s propaganda videos. Khalifa recently pled guilty in United States federal court for his role in the terrorist group, particularly the immense value that he added to their recruitment efforts.

Before Mohammed Khalifa, though, there was Anwar al-Awlaki. Al-Awlaki, a Yemeni American, preached in English about the glory of suicide terrorism for the sake of martyrdom and the obligation of all Muslims to engage in endless offensive jihad against the West, whom he deemed to be at war with Islam. Al-Awlaki was killed in a U.S. drone strike in Yemen in 2011, but his legacy and influence lives on. Among his disciples was Omar Mateen, who killed 49 people at Pulse nightclub in 2014 – at the time, the deadliest mass shooting in American history. Other notorious followers include Boston Marathon bombers the Tsarnaev brothers, the San Bernardino shooter Syed Farook, and the Fort Hood shooter Nidal Hassan. Another follower of al-Awlaki was Mohammed Khalifa. When he was interviewed by the International Center for the Study of Violent Extremism in 2019, Khalifa recalled the process by which he radicalized to militant jihadism as a young adult in Canada: “I was listening to lectures by Anwar al-Awlaki, and his lectures had an impact on me. [They] kind of pushed me to make the decision to move the date forward. It’s in general, just the fact that he was approaching the life of the Prophet Muhammad and bringing it into like a modern context and interspersing it was like, like a jihad narrative.”

Khalifa was not alone in being inspired to join ISIS by a man who died when ISIS was still al Qaeda in Iraq. Of the 273 ISIS returnees, defectors, and imprisoned cadres whom ICSVE has interviewed, many Westerners referenced Anwar al-Awlaki in describing their influences in deciding to travel to join the group. His charismatic, modern, style of preaching made him accessible to them, convincing them that they too had an obligation to defend Muslims abroad. Even now, after the fall of the territorial Caliphate, Instagram pages live on in his name, regularly posting videos and quotations that could easily inspire violence. 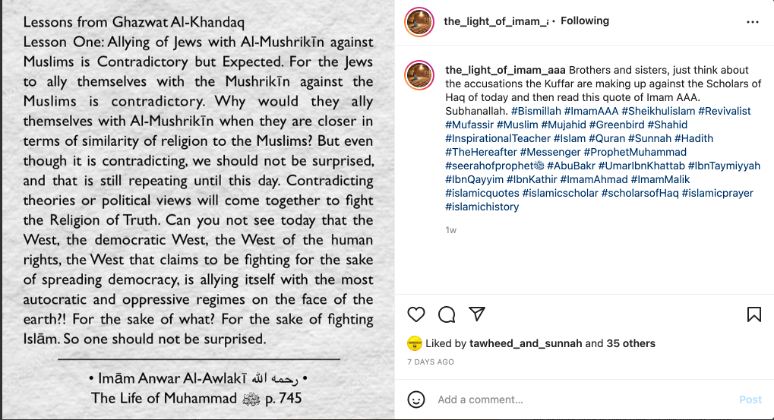 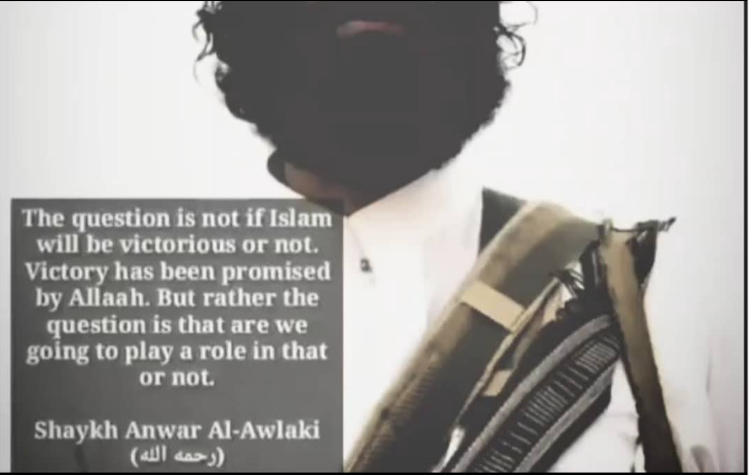 Now, however, Khalifa is speaking out against his infamous predecessor and the group for which he was once the most well-known English-speaking voice. In May 2019, Khalifa agreed to participate in the creation of counter-narrative videos as part of ICSVE’s Breaking the ISIS Brand Counter Narrative Project. After an in-depth psychological interview conducted by ICSVE director Dr. Anne Speckhard, Khalifa consented for the videoed interview to be cut to create counter-narrative videos and gave permission for his real name to be used and for his face to appear in the videos.

In a video titled “Standing in Front of Allah,” Khalifa recounts all of the moving parts that went into creating ISIS’ propaganda videos: Those who followed the fighters with camcorders, those who cut together the raw footage, those who composed and sang nasheeds to be used in the background of the videos, those who added special effects, and his team – the translators and narrators. Khalifa admits that he liked some of the videos he helped to make. In one particularly moving video, a story is recounted of a man whose job it was to register “martyrs” – suicide bombers. One day, it was the man’s own young son’s turn to register, and the man was full of pride. Khalifa liked those videos that “played on your heartstrings” much more than those that simply cut together battle footage.

Khalifa, being a high-level part of the media arm of ISIS similar to the ISIS emni (secret police) and leadership, lived a privileged and protected life inside ISIS and was not subjected or even fully aware, according to his claims, of the extent of ISIS’ brutality toward their own. It was after his capture by the Syrian Democratic Forces (SDF) that Khalifa began to become disillusioned with ISIS. Hearing the stories of his fellow prisoners, he understood that what he had previously thought were rumors about ISIS’ brutality, especially that of the emni, were actually true. He was also disillusioned by ISIS’ practice of takfir. He was horrified at the idea that he should denounce his own parents as apostates, in ISIS’ view, deeming them worthy of death. He also learned that ISIS leadership had fled from the locations of the final battles, “basically to leave the foreigners hanging.” About the “bad scholars” who influenced him to join ISIS, including al-Awlaki, Khalifa says, “You really have to be careful who you are taking [Islamic knowledge] from.” He points out that taking the time to learn Arabic, he realizes that he doesn’t need to “rely on modern-day [self-proclaimed] scholars. I can go back to the more classical books and see what they have to say.”

In another video, “Does Following Anwar al-Awlaki’s Teachings Make You Safe on the Day of Judgment?”, Khalifa explains, “There is always like discussions by scholars related to jihad and what the boundaries are […] On the takfir issue, no, I’m against that […],” he says, asking what his own parents could have done to deserve to be takfired. He points out “[the ISIS] scholar overriding a verse of the Qur’an or a hadith of the Prophet Muhammed, and you see this a lot.” About the actions he took in part because of al-Awlaki’s influence, on behalf of ISIS, a group he has now washed his hands of, Khalifa says, “The [worldly] judge, that’s not what’s on my mind. My greater concern really is being absolved of my sin in front of God.”

Finally, in a very short video designed for use on Facebook counter-narrative campaigns, titled “The New Scholars of the Islamic State Caliphate,” Khalifa says of his time in ISIS, “I’ve learned along the way that a lot of the problems had to do with the fact that they wouldn’t follow the texts exactly as they should be […] Learning to do your own research and having the tools at hand, it’ll keep me from just swallowing anything I see from ISIS or anyone else.”

Will the “English voice of ISIS” be able to convince those vulnerable to radicalization to turn away from militant jihadism and the teachings of Anwar al-Awlaki? At ICSVE, we look forward to analyzing the results of these counter-narrative videos in Facebook ad campaigns. Previous ad campaigns in Europe have suggested that videos whose speakers are men of immigrant descent who show their faces and use their real names are most capable of garnering engagement from Facebook viewers in the form of comments, reactions, and shares, and that they are also able to retain viewers’ attention. The three videos featuring Mohammed Khalifa fit those criteria to a T. His credibility will also be enhanced among vulnerable viewers if they recognize his voice as that of a trusted insider. However, qualitative analysis of the comments on these high-engagement counter-narrative videos suggests that such engagement may derive in part from the ire felt by Europeans toward those ISIS members whom they deem the most dangerous. Whether viewers will perceive Khalifa’s expressions of regret as sincere is still left to be learned, and this may affect the opinions of Canadians in particular, who may eventually see Khalifa return home. Interestingly, Khalifa is now admitting guilt in secular court as well, having just pled guilty to charges against him this month. Yet, the opinions of those most susceptible to militant jihadist radicalization and recruitment are unlikely to hinge on Khalifa’s contrition, but rather on the emotionally evocative way in which he describes how militant jihadist scholars like al-Awlaki influenced him to take actions so terrible that he is afraid of the day that he will have to account for his sins in front of God. Perhaps these individuals will be swayed, perhaps not for the first time, by the voice of Mohammed Khalifa.

Anne Speckhard and Molly Ellenberg
Anne Speckhard, Ph.D., is Director of the International Center for the Study of Violent Extremism (ICSVE) and serves as an Adjunct Associate Professor of Psychiatry at Georgetown University School of Medicine. She has interviewed over 700 terrorists, their family members and supporters in various parts of the world including in Western Europe, the Balkans, Central Asia, the Former Soviet Union and the Middle East. In the past three years, she has interviewed ISIS (n=239) defectors, returnees and prisoners as well as al Shabaab cadres (n=16) and their family members (n=25) as well as ideologues (n=2), studying their trajectories into and out of terrorism, their experiences inside ISIS (and al Shabaab), as well as developing the Breaking the ISIS Brand Counter Narrative Project materials from these interviews which includes over 175 short counter narrative videos of terrorists denouncing their groups as un-Islamic, corrupt and brutal which have been used in over 125 Facebook campaigns globally. She has also been training key stakeholders in law enforcement, intelligence, educators, and other countering violent extremism professionals on the use of counter-narrative messaging materials produced by ICSVE both locally and internationally as well as studying the use of children as violent actors by groups such as ISIS and consulting with governments on issues of repatriation and rehabilitation. In 2007, she was responsible for designing the psychological and Islamic challenge aspects of the Detainee Rehabilitation Program in Iraq to be applied to 20,000 + detainees and 800 juveniles. She is a sought after counterterrorism expert and has consulted to NATO, OSCE, the EU Commission and EU Parliament, European and other foreign governments and to the U.S. Senate & House, Departments of State, Defense, Justice, Homeland Security, Health & Human Services, CIA, and FBI and appeared on CNN, BBC, NPR, Fox News, MSNBC, CTV, and in Time, The New York Times, The Washington Post, London Times and many other publications. She regularly speaks and publishes on the topics of the psychology of radicalization and terrorism and is the author of several books, including Talking to Terrorists, Bride of ISIS, Undercover Jihadi and ISIS Defectors: Inside Stories of the Terrorist Caliphate. Her publications are found here: https://georgetown.academia.edu/AnneSpeckhardWebsite: and on the ICSVE website http://www.icsve.org Follow @AnneSpeckhard. Molly Ellenberg is a research fellow at the International Center for the Study of Violent Extremism [ICSVE]. Molly is a doctoral student in social psychology at the University of Maryland. She holds an M.A. in Forensic Psychology from The George Washington University and a B.S. in Psychology with a Specialization in Clinical Psychology from UC San Diego.