The Heart of Strategic Influence: Aristotle’s Contribution to Addressing DisInformation

We must discern the nature of the conflicts we are in, and whether or not we fight with effective weapons. 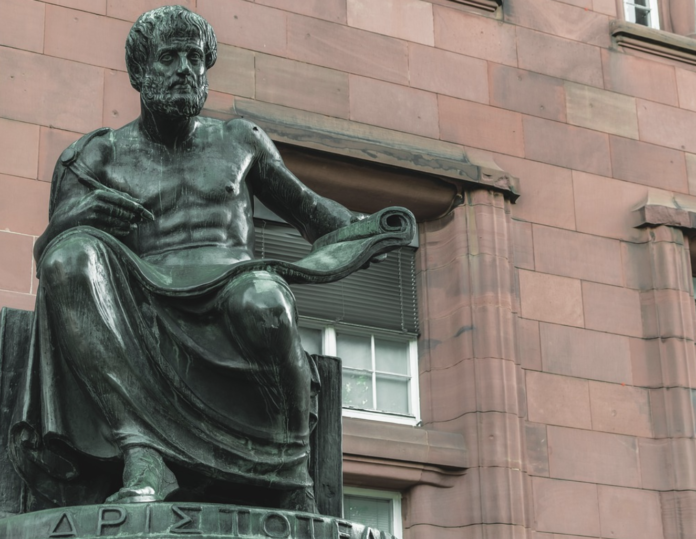 A correlative claim that can be made of the Aristotelean distinction is that one can claim that a history is inaccurate or false, but one cannot make a sensible similar accusation about a poem. A poem may fall flat. It may not resonate. But to claim that it is non-factual is to misunderstand the nature of poetry itself. It is to misunderstand its power.

Poetry does not strive for factual coherence; it strives to touch the deep meaning of human experience. Its target is the heart, not the mind.

Narrative is poetic. It is not historical.

Why should NATO participants and national defense professionals care about the distinctions that an ancient philosopher made hundreds of years before the birth of Christ? Because understanding that distinction may mean the difference between containing Russian aggression or not. The distinction may determine whether or not nation states can hold themselves together in the face of strategies seeded to collapse them from within.

Understanding this classical philosophical distinction between history and poetry will determine whether or not we are able to discern the nature of the conflicts we are in, and whether or not we fight with effective weapons. Using history as a weapon against poetry is to use the wrong tools in a misidentified battle space.

“Disinformation” is an incorrect label for a narrative that influences public opinion. If it was non-information or wrong information, then it could simply be countered with correct information. It would be in the category of history, the facts of which could legitimately be disputed.

When “Disinformation” is effective it is because it is told in poetic, narrative form and cannot be countered with recourse to “truth” or “facts.” It can only be countered in poetic form – that is, the deeper resonance with human experience is what has to be addressed. Information is unarmed against a poetic narrative. As is history. The “facts” of history can be retold, and be given any variety of resonate meaning.

Influential narratives give we human beings that thing we crave: meaning. When disinformation is influential it is because it means more to the target audience than the truth or the facts or verified information. Information is just raw data and we do not crave raw data. Raw data has no inherent appeal.

Homer’s Illiad, for example, has had profound influence in western cultures even though it is not a factual historical account. It is in the category of the poetic. It speaks to the nature of a heroic quest therefore gives its audience a way to frame their own challenges. It enables the audience to view their own battles with obstacles and hurdles in a heroic light. The lack of truth value is irrelevant to the meaning it imparts to our experiences. The lack of truth value does not negatively affect its meaning value.

The gods and goddesses of ancient Greece, Rome, and India are archetypes. We recognize them. As types they refer to something beyond actual individual persons. The Muse speaks to us about the nature of inspiration. Sirens are not “real”; they strike a chord in us regarding the nature of temptation.

Rather than continuing to be dumbfounded by the influence of disinformation, we need to get a grip of this ancient distinction and get our categories straight. Technological advances have not altered the nature of the beast. And they cannot help us fight it if we cannot even identify what it is we are up against.

To the extent that truth-telling is part of our narrative strategy, it cannot be reactive; we cannot chase our adversaries around matching their lies with the truth because, as recent cognitive science has demonstrated, countering lies by repeating them with the word “no” (or some other negative) attached actually has the opposite effect. It strengthens the false statement in the mind of the audience (“Don’t Think of an Elephant” is George Lakoff’s challenge). Truth and facts should be a part of our narrative, but it is in determining the meaning of the truth and lies that we must dominate. That is the heart of influence.