Al Adnani’s Death Will Not Stop Jihad Against the West 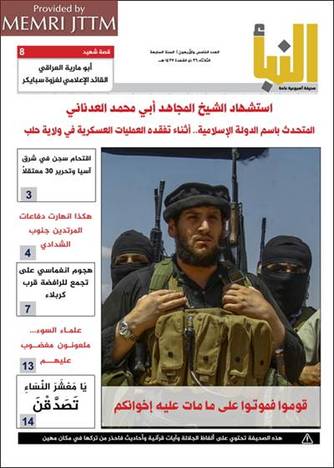 Following the Islamic State (ISIS) news agency, A’maq, reporting Islamic State official spokesman and emir of ISIS in Syria, Abu Muhammad Al Adnani Al Shami, was killed in Syria, jihadists have been espousing the virtues and inspiration of AL Adnani, saying he a died a martyr’s death “and stressed that his loss – like the loss of other commanders before him – will not halt the spread of the Islamic State nor stop it from targeting America and the West,” according to the Middle East Media Research Institute (MEMRI).

MEMRI said, followers monitored on social media “exhorted all ISIS supporters to follow in his footsteps, to increase their efforts in spreading ISIS’s message, and especially to heed his call to carry out attacks in the West. They called Al Adnani ‘Al manjaniq’ (‘the Catapult’), in reference to his intense verbal attacks on ISIS’s enemies and ‘the Lion,’ in reference to his role as a senior ISIS commander who was in charge of ISIS’s operations outside its territory, among other things.

They also added "Al-Husseini Al Qureishi" after his name, to indicate that he was a descendent of the Prophet Muhammad. The use of this appellation, which is also added to the name of ISIS leader Abu Bakr Al Baghdadi, suggests that Al Adnani was intended to be Al Baghdadi’s successor.”

Immediately after the announcement of Al Adnani’s death, MEMRI cautioned, “Al Adnani’s death is expected to generate a ripple of reactions, including threats for retaliation, from ISIS and its supporters,” noting, “In the last two years, Al Adnani rose in public attention especially with his repeated calls for attacks against the West."

According to the announcement posted on the agency’s website and Telegram channel, a "military source” told A’maq “the martyrdom of Sheikh Abu Muhammad Al Adnani, spokesman of the Islamic State, [was killed] during an inspection of his to repel the military campaigns against Aleppo."

The following are excerpts from some of these responses to Al-Adnani’s death.

MEMRI said, “An article published in ISIS’s official weekly Al Naba only a few hours after the news of Al Adnani’s death declared that his loss would not harm ISIS, because many competent commanders would take his place and continue his path. The article stated: ‘The liars always try to present the death loyal [fighters], or their killing by the polytheist and infidel enemies of Islam, as heralding the collapse of the monotheists. These fools do not realize that Allah decreed in advance the fate of each and every [individual] even before He created the heavens and the earth … The killing of our steadfast brothers who went before us, like Sheikh Abu Muhammad Al Adnani, does not harm Islam one whit … nor does it harm the Islamic State, as long as [the Islamic State] sticks to the path of monotheism and the sunnah. Allah will provide [ISIS] with [more] men by means of whom He will thin out the ranks of the infidels and gladden the hearts of the believers."

The article further noted the enemies “also rejoiced at the death of the founder of the Islamic State, Abu Mus’ab Al Zarqawi, but Allah replaced him with commanders like Al Adnani who continued his path and delivered deadly blows to the enemies.”

MEMRI said the report added that “the death of senior commanders only strengthens the resolve and the boldness of the mujahideen,” and ended with a threat: ‘Today [our enemies] rejoice at the death of Sheikh Abu Muhammad Al Adnani, but tomorrow they will weep, when Allah [sends] them the soldiers of Abu Muhammad Al-‘Adnani, who will subject them to the most horrible of tortures."

Al Naba featured Al Adnani in a photo never previously published in the report, America Will Be Struck With Amazement At The Endurance And Expansion Of The Islamic State.

“An ISIS supporter calling himself Abu Haya Al Masri wrote under the heading, ‘The Death of Commanders Motivates [Us] And Is a Blessing … America thought that by assassinating two sheikhs, ‘Omar Al Shishani and Abu Muhammad Al Adnani, it had won and managed to halt the jihadi campaign of this ummah. But this was a false victory. It seems that America has forgotten history. Soon it will be struck with amazement at the endurance and expansion of the Islamic State. It will also discover that the arms of the Islamic State are very long [and can] strike the necks of the infidels. These battles will take place in [the infidels’] very home, Allah willing."