Another TSO Saves the Day – and the Bacon! 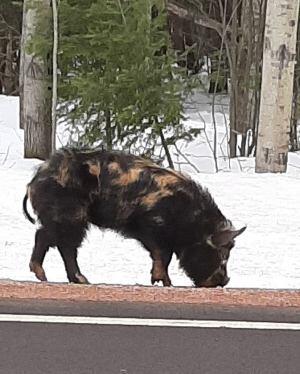 Couldn’t we all use a light-hearted story right now?

Well, let’s hear it for Transportation Security Officer Bobbi Birk-LaBarge, an animal lover who cares for her eight dogs when she’s not helping TSA secure our travel at Rhinelander-Oneida County Airport.

Birk-LaBarge recently spotted a loose pig (yes, a pig!) on the side of a country road nibbling at the gravel, so she pulled over to take a closer look. With no farms in sight, she figured that the pig had likely gotten loose and was now lost.

“I had to save it,” said Birk-LaBarge, who has worked for TSA for seven years. “I’ve never dealt with pigs before. I started to call, ‘Here piggy, here piggy,’ because I didn’t know what to say.” She opened her car door and the pig walked toward the vehicle, but of course, he did not hop in. She picked up the pig, which she estimated at about 70 pounds, and put it in the back seat. “Then he tried to eat everything I had back there and there was a little struggle to get things away from him. I wondered, what am I going to do with a pig,” she said. “I thought he might bite me.”

As she pulled back onto the road, the curious animal placed his hooves on her car’s center console and rested its head on her arm and gazed out the front window. She knew immediately it was not an average pig, rather it was more likely a lost pet pig.

She called the Marathon County Sheriff’s Department Dispatch Center and explained what happened. The dispatcher and Birk-LaBarge enjoyed a good chuckle when they realized that the animal was actually picked up in the nearby Township of Hamburg in Marathon County. “We had a good laugh at that pun,” she said.

She and her husband drove the pig to a friend’s farm for safekeeping and then began knocking on doors of nearby houses. Fortunately, the first door was the right one.

It turns out that Henry-the-Pig, an Idaho pasture pig, is a local celebrity and makes special appearances at community events and petting zoos.

Henry-the-Pig even has his very own Facebook page, where he lists his hobbies as cuddling and snuggling. Just goes to show you, this pig really is quite a ham!