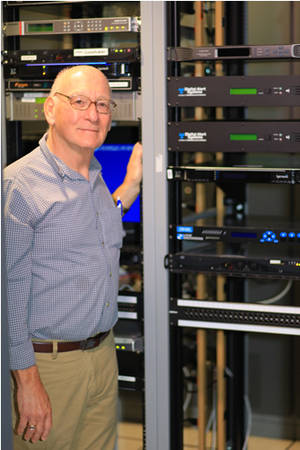 The earthquake disaster public warning systems was part of the largest earthquake drill ever. The Great ShakeOut is an annual training event that originated in California and now has spread nationwide as well as to Italy, New Zealand and Japan.

Datacasting is the process of delivering internet protocol (IP) data over a traditional digital public broadcast television signal, including instantaneous alerts, combined with evacuation maps and even live video.

“We’re excited that KVIE and America’s Public Television Stations are on the front lines of harnessing and testing promising new technologies to help deliver critical public alerts and warnings in California,” said Art Botterell, the coordinator of the alert and warning program at the Governor’s Office of Emergency Services. “This is a great example of an important public-private partnership that’s focused on improving our state and local public safety capabilities.”

“The test delivering the simulated alerts went very smoothly,” said Mike Cappi, director of technology at KVIE (in photo at the left). “In the next phase the test will measure the speed and coverage of alerts digitally encoded into KVIE’s high power television transmission. Warnings used to be a matter of seconds or minutes, but when there are natural disasters like earthquakes, saving a fraction of a second in delivering a warning can make a huge difference.”

“America’s Public Television Stations are extremely proud that public television and radio stations are partnering with emergency services in today’s Great California ShakeOut,” said Patrick Butler, president and CEO of APTS. “This work is part of public broadcasting’s larger public service mission, including the APTS strategic partnership with DHS, to promote the use of public safety datacasting as an effective component to alert and protect the American people. We congratulate everyone involved in today’s successful earthquake alert test. Public television has once again demonstrated its capability to be an important partner in public safety, and we look forward to working with emergency alert agencies in California and around the country to convey more life-saving information more quickly to more people through our pioneering public safety datacasting service."

On October 5, DHS’s Science and Technology Directorate and APTS signed an agreement that will enable them to leverage both organizations’ strengths and resources to benefit the first responder community.

S&T’s First Responders Group and APTS signed a Memorandum of Agreement to make the datacasting technology available nationwide, enabling the public safety community to transmit secure data, including voice, text, files, images and video over existing broadcast television signals to a targeted audience. Even in an emergency situation, where other wireless services often fail due to network congestion, datacasting still provides a reliable platform for quickly sending and receiving large files.

Datacasting has been piloted multiple times between 2015 and 2016. The City of Houston successfully leveraged the technology during the Republican Presidential Candidates Debate, and other successful pilots took place during the NCAA Men’s Final Four Basketball Tournament and the flooding response and recovery efforts in April. These pilots have proven that datacasting can be a reliable vehicle to get first responders the situational awareness and information they need quickly and without disruptions.

Through this partnership, DHS S&T said it aims to further its mission of providing first responders with innovative tools and technologies to strengthen their ability to respond to the most pressing challenges faced during day-to-day and large-scale emergencies to better protect the nation.

On October 6, APTS president and CEO Patrick Butler said, "America’s Public Television Stations are honored to have established a formal partnership with the US Department of Homeland Security’s Science and Technology Directorate to promote the deployment of public safety datacasting as an effective component in the protection of the American people. "We look forward to working with DHS and with first responders and emergency communications agencies nationwide to marshal this promising public television technology in the service of our country.”

"Pilot programs with public television stations in Houston, Chicago, Boston, Las Vegas, Washington DC and other communities have demonstrated the value of datacasting in coordinating emergency response efforts among responsible agencies and bringing life-saving information to the public efficiently and effectively,” Butler said, noting, "Public safety is an essential mission of America’s public television stations, together with education and civic leadership, and this landmark agreement with the Department of Homeland Security is an important step forward in the pursuit of this mission."