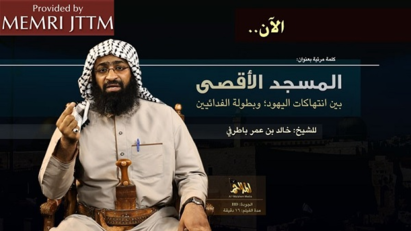 Khaled Batarfi, the senior commander of one of Al Qaeda’s most dangerous franchises, Al Qaeda in the Arabian Peninsula (AQAP), called on Muslims and jihadi groups to support the mujahideen in Palestine and making attacking the US a "top priority” in a video statement released Tuesday by Al Malahem, AQAP’s media arm.

AQAP has attempted numerous thwarted attacks on the US, and instrumental in recruiting, radicalizing and directing US citizens in jihad.

Calling the US "the Snake’s Head," Batarfi urged jihadi groups to make attacking America a "top priority,” saying, "It has been proven that the US is not able to protect its homeland security as well as its interests around the world, which makes it difficult to defend. By attackingthe US, we would force it to adopt isolation and as a result, abandon Israel."

Batarfi then urged Muslim nations to expose the "traitor rulers," rebel against them and overthrow them, according to the Middle East Media Research Institute (MEMRI), which monitors jihadi social media.

MEMRI said Batarfi  called for a revolt against the "traitor rulers" of Muslim countries and praised the Palestinian "Fedayeen," who have carried out attacks against Israelis. He also called on Muslims to support the mujahideen in Syria, which he considers a "very important issue and closely related" to the Palestinian issue.

“Batarfi opens his video statement, which is titled ‘The Al-Aqsa Mosque – between the Violation of the Jews and the Heroism of the Fidayeen,’ by congratulating the Islamic ummah on the occasion of Eid Al Adha. He then delves into the main topic, addressing the situation of the Palestinian people and the blockade of the Gaza Strip, which he accuses Arab countries of participating in,” MEMRI translated.

Continuing, MEMRI said, “Criticizing Egyptian anti-terrorism operations in Sinai, Batarrfi accused the West and the Gulf states of supporting and sponsoring the rule of President ‘Abd Al Fatah Al-Sisi. Batarfi then asks Muslims to understand the Palestinian issue from a historical perspective. ‘The issue of Palestine, he said, ‘is an issue that the enemies are trying to isolate from our religion and history. A nation which has lost its religion and misunderstands history will be a lost and wandering one, and its enemy can manipulate it in all fields and levels.’”

Batarfi further attraked the West over the creation of Israel, and blamed the US for supporting it. He accused Arab rulers of "selling out" the Palestinian issue by signing peace treaties with Israel, presenting peace initiatives and protecting Israel’s borders.

"This is why the US gives the Egyptian military Apache helicopters and provides military and financial aid to turn the Egyptian army into a hunting dog whose job is to protect Israel and kill the Muslim people in Egypt," he said.

Describing what he calls the "three enemies," Batarfi mentioned "the occupiers Jews," the West led by the US, and apostate and traitor rulers.

"No doubt, Muslims’ actions would fail and be incomplete if they did not take in consideration that they face this complex tripartite aggression,” Batarfi stated.

“Despite acknowledging the difficulties posed by the ‘traitor rulers’ protecting Israel," MEMRI said, “Batarfi calls on the Muslim ummah to support jihad and jihadi groups fighting in Palestine. He then called on Palestinian groups to reconsider their military and political options so that the jihad in Palestine would not cease.”

“Another ‘highly important issue and closely related,’ as described by Batarfi, is supporting the mujahideen in Syria,” MEMRI said.

"Syria," Batarfi said, "is one of the important gates to Palestine, which explains the great international conspiracy against jihad in Syria."

Batarfi  praised the Palestinian "Fedayeen" who have carried out attacks against the Israelis in Jerusalem, Ramallah, Nablus and the West Bank using knives, guns and cars. He said they have "changed the conflict’s balance” and argued "these operations have proven that the pulse of the Islamic ummah cannot be stopped and the ummah may be unconscious for a long time, but it will not die."

Batarfi concluded his message by addressing the people in Palestine. "By Allah’s name,” he stated, “we have not forgotten you, and if it weren’t for the borders and barriers which have been imposed by the West through its agents the traitor rulers, we wouldn’t have delayed in aiding and supporting you."