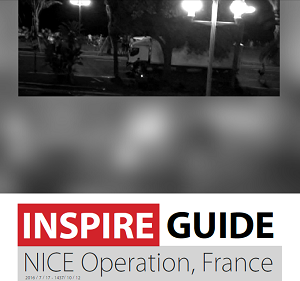 In the Inspire Guide, AQAP makes clear that it urged jihadists to use trucks to slaughter as many people as 31-year-old Tunisian Muslim emigre Mohamed Lahouaiej Bouhlel obviously intended to do when he massacred at least 84 people when he drove a rented 19-ton Renault truck for more than a mile along a Nice, France beachfront roadway filled with Bastille Day celebration crowds last week.

AQAP praised Bouhlel’s method of jihad, noting its article, The Ultimate Mowing Machine, in the second issue of AQAP’s Inspire magazine, published in 2010.

Bouhlel “has executed the operation in its totality and perfection; and it is not left for us except to add a few points of observation. We have previously presented in Inspire magazine issue 2 an idea of using a vehicle to run over gatherings of kuffar. We added a method that will increase the casualties of the targets and assure their killing. The method includes placing a wide sharp blade at the front of the vehicle in a way that will not raise any suspicions, like placing a bumper to camouflage it. You can refer to the second issue of the magazine for more reference.”

While US and European counterterrorism intelligence officials have indicated Bouhlel appears to have been pushed suddenly into radical Islam by ISIS online jihadist propaganda, Stalinski said, “I think AQAP are jealous they haven’t been able to succeed in a while with a successful attack in the West, and that ISIS has gotten all the attention lately in the media. The quality and production value of the [new AQAP guide], which is only four pages, also shows a diminished Inspire magazine. Also worth noting that this is the second issue (the first was on the Orlando attack) of those special editions of Inspire that AQAP started putting out after attacks in the West offering its insight on the attack and how to improve it.”

Two weeks before Bouhlel’s jihadi attack in Nice, a video was released using a Telegram channel managed by French ISIS fighters, likely in Mosul, in which an ISIS fighter called for French jihadists to use large trucks to carry out mass killings of “infidels.”

“Jihadi groups have called for lone wolf style attacks in the West and the use of vehicles in attacks has been previously recommended by both ISIS and AQAP,” MEMRI noted.

Whether or not Bouhlel, however, was inspired by ISIS or AQAP’s detailed 2010 instructions for using trucks to kill infidels, AQAP is certainly taking advantage of Bouhlel’s method of attack to promote itself.

“The Nice operation has many important messages, the first of them is the creation of a state of fear and terror and spreading it to other European nations,” AQAP’s new guide stated. “And this is the result of targeting the general gatherings of people. The French people lived a night of terror and fear asking themselves … why here? And what is the reason? The answer directly comes when they say, ‘this is Islamic Terrorism.’ The Mujahidin answer, ‘as you treat others, you will be treated the same,’ and, ‘as you kill you will be killed’ and ‘as we live in fear, you too will be in fear.’ We are defending ourselves. Sheikh Usama has offered you a truce of 10 years and you decided to refuse and go to extremes. Today the decision will be in hands of the French public, the ones capable of stopping all this.”

AQAP said, “What increases their fear in this operation is its uniqueness; the operation was in a new manner and form, it was unexpected,” noting, “The weapon used can be readily available in the streets. And what increases more fear in them is that some authorities in charge of security admit that it is impossible to stop similar type of operations.”

“The second message,” AQAP stated, “is that tourism in France from now on will never be safe. And this will pose a threat to the annual revenue France gains from tourism. And this is a message to the tourists all over the world, that France is no longer safe.”

Lastly, AQAP said the “third message is for the Muslims. France that celebrate the Bastille Day, which represents freedom, brotherhood and equality. The French who made the issue of attacking the Bastille prison a symbol of revolution and freedom. While at the same time, France is the one which imprisons many Muslims, persecuting them, plundering their wealth, killing the children and women with the help of their American allies. This freedom is meant only for the French, as for the Muslims then they have nothing.”