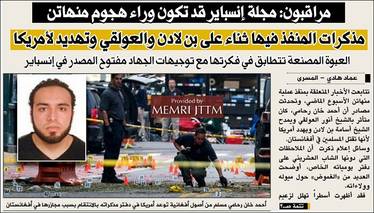 The 24th issue of Al Qaeda in the Arabian Peninsula’s (AQAP) weekly Al Masra newspaper featured a report about Ahmad Rahami, who was arrested on suspicion of planting bombs in New York and New Jersey, stating he was influenced by Al Qaeda, according to the Middle East Media Research Institute (MEMRI), which monitors jihadi social media.

Al Masra quoted "news reports," "sources" and "observers" from US media which “claimed Rahami was inspired by A Qaeda’s leaders and the group’s anti-US rhetoric, and that he received operational guidance from AQAP’s English-language magazine Inspire,” MEMRI said. “The report constitutes AQAP’s attempt to take some credit for Rahami’s actions without claiming responsibility for them, as Rahami was not directly affiliated with the group.”

MEMRI also pointed out that, “It should be noted that AQAP ignored Rahami’s mention of recently-killed senior ISIS leader Abu Muhammad Al Adnani.”

"News reports concerning the perpetrator of last week’s Manhattan operation are coming one after the other. Sources are saying Ahamd Khan Rahami was influenced by Sheikh Anwar Al Awlaki, that he praised sheikh Osama bin Laden and that he threatened America because it is killing Muslims in Afghanistan,’ AQAP’s Al Masra reported, adding, “The media mentioned that the notes written by the young man in his private journal clarified much of the mystery surrounding his tendencies and loyalties.”

"[The journal] displayed notes praising Al Qaeda leader Osama bin Laden and other leaders from the organization such as Al Qaeda cleric Anwar Al Awlaki and Nidal Hasan, the perpetrator of the 2009 Fort Hood operation that killed f 13.

Al Alwaki directly corresponded with Hasan and other since arrested or killed jihadists in the US who’d largely been ignored by Joint Terrorism Task Forces.

Rahami’s “journal also contained attacks on the U.S. …Observers pointed out that the way the explosion was caused and the manufacturing of the pressure cooker bombs [indicate] it is likely the perpetrator of the attack benefited from [guides] in Inspire magazine, which is published by AQAP’s Al Malahim Foundation [the group’s media company] …,” MEMRI said.

The officials acknowledged that this represents a "serious new threat."

Since that report, US and Western counterterrorism officials have told Homeland Security “more and more” intelligence “chatter” and jihadi social media websites – including Dark Web sites for jihadi communication – have indicated exploitation of Rahami’s jihad and exhortation of jihadists everywhere to become involved by using the newest pressure bomb techniques.

Indeed. MEMRI reported that, “On September 25, the Al Battar Media Foundation, which is associated with ISIS, published a post by Abu Al Muntasir Al Maghribi, While Sisters Fight the Jihad War, which criticized male ISIS supporters who do not take up arms and join the jihad themselves.”

MEMRI said, “The author argues that if the three women who carried out the recent attack on a police station in Mombasa, Kenya rose up an acted despite the fact that the duty of jihad does not apply to them, then men are doubly obligated to do so as well. He called on supporters to follow in the footsteps of the Mombasa women and of the perpetrators of the attacks in Paris, Brussels, Orlando, Nice, Germany and elsewhere.”

“It should be mentioned,” MEMRI stated, “that the Mombasa attack sparked a debate among ISIS supporters and opponents regarding the permissibility of women participating in jihad. ISIS supporters also recently addressed this issue, arguing that women should leave the jihad fighting to men, but that in special cases, such as the Mombasa attack, women can actively participate in the jihad war.”

American woman have been caught in recent years actively supporting jihadists abroad as well as on US soil.