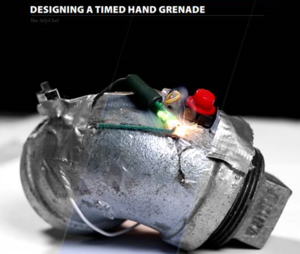 Only days before the anniversary of the 9/11 attack, “Assassination Operations” is the focus of Al Qaeda in the Arabian Peninsula’s (AQAP) latest issue of its English-language magazine Inspire, which targets Muslims and those newly converted to radical Islam.

Among the articles is a military analysis of the January 2015 attack on the Paris offices of Charlie Hebdo; instructions for making a home-made grenade; and "Assassinations Field Tactics,” which lists 10 well-known Americans as targets of jihad.

Previous issues of Inspire had already suggested Bernanke and Gates as targets for jihadi assassination.

Among the articles in the latest Inspire are, Some Things Are Too Beautiful to be Forgotten: Will We Ever Experience Such a Sight Once More? (the headline that opens a two-page spread photo of a collapsing World Trade Center building); Remembering Boston; Did You Know that a TSA Security Officer is More Likely to Confiscate a Water Bottle than a Bomb; and, Assassination Operations.

"We present to you, a model to follow, and an assassination list which will help us achieve strategic goals,” AQAP said. “We believe that placing this feasible program to Lone Mujahideen will allow us to achieve great goals in this war. Whoever understands the components of the American economy knows the importance these personalities play in the revival of the America Economy. The assassination of these economic personalities or their migration from America or the mere fact that they live in insecurity, will later on bring instability to the American economy."

“One central theme from all Inspire magazines which are directed to Al Qaeda sympathizers in the West has been for calls to do lone wolf attacks,” Homeland Security Today was told by Steven Stalinsky, executive director of the Middle East Media Research Institute (MEMRI), which monitors jihadi social media.

“In fact,” Stalinsky said,” this can be traced to the June 3, 2011 seminal Al Sahab video staring Adam Gadahn, ‘Do Not Rely on Others, Take [the Task] Upon Yourself.’ The video was devoted to the topic of Al Jihad Al Fardi (‘individual jihad’), namely jihad operations performed by a single individual or by a small group.”

“From that point on,” Stalinsky told Homeland Security Today, “Al Qaeda called on Muslim communities in the West to attack from home.”

Gadahn was an American from California who joined AQAP and became an operative, cultural interpreter, spokesman and media advisor who’d been placed on the Bureau of Diplomatic Security Rewards for Justice Program list of wanted criminals killed in a 2008 US drone strike.

Gadahn had proselytized that, “Muslims in the West have to remember that they are perfectly placed to play an important and decisive part in the jihad against the Zionists and the Crusaders, and to do major damage to the enemies of Islam, waging war on the religion, sacred places and things, and brethren. This is a golden opportunity and a blessing from Allah. The way to show one’s appreciation and thanks for this blessing is to rush to discharge one’s duty to his ummah, and fight on its behalf, with everything at his disposal.”

“And in the West,” Gadahn exhorted the willing, “you’ve got a lot at your disposal … Anyone who is thinking of going forth to the arenas of jihad today has to be aware of the difficulties and dangers that he might face, and that in the end, things might not turn out as he had wished. But by the grace of Allah, the enemies’ interests are today spread all over the place and are easily accessible, as the leaked American State Department cable on critical foreign dependencies makes crystal-clear.”

“So, the opportunity to carry out the divine obligation of fighting the enemies of Allah is available to anyone who has the will and determination, regardless of where he might be,” Gadahn continued.

Stalinsky noted that, “Since this video, and especially with the advent of ISIS and the explosion of social media usage by jihadis, there have been numerous successful and failed attacks in the West. Fourteen years after 9/11, this has become part of life in the West, and proves the calls by Al Qaeda have been heard.”

And that’s what keeps the US Intelligence Community (IC) awake at night, IC counterterrorism officials told Homeland Security Today. With more US-based jihadist terror cases in 2015 than in any full year since 9/11, and the number of US terrorist cases involving homegrown violent jihadists having escalated from 38 in July 2010, to 124 today — more than a three-fold increase in just five years — officials said the “persistent” calls for lone wolf jihadists to kill individuals on jihadi assassination lists “will likely provoke” new lone wolf or small cadre attacks.

“The cumulative call to jihad against specific persons, and instructions on how to try to do it, seems to parallel the increase in assassinations and attempts, and jihad attacks in general suggested by AQAP,” one of the officials stated.

US counterterrorism intelligence officials have told Homeland Security Today they “have every reason to believe” Islamist jihadists – all Muslims or individuals and small cells of individuals who’ve recently converted to the Muslim faith and radicalized by online jihadist propaganda — or recruiters at the Mosques they attend — are believed to be planning “far more spectacular attacks in the US” than the attempted attack in Texas, at which time officials acknowledged there may be hundreds, if not thousands of radicalized individuals in the US — some undoubtedly in direct contact with jihadists overseas.

FBI Director James Comey has noted that jihadist propaganda has shifted from a message of urging jihadists to join ISIS in its jihad in Syria and Iraq, to telling followers to kill infidels where ever they live.

Meanwhile, the Department of Defense — not just a few of whose senior leaders are named in a recent ISIS “hit list” — ordered all military installations to “Force Protection Condition (FPCON) Bravo,” which means “an increased and more Predictable Terrorist Threat Activity exists. Specific information suggests probable violence,” and that “extra precaution is appropriate to deter terrorist planning.”

"We have a general concern, obviously, that ISI[S] is focusing on the uniformed military and law enforcement," Comey told reporters.

US Northern Command Commander (NORTHCOM) Admiral William Gortney, who oversees all US military installations in the United States, ordered the FPCON.

NORTHCOM spokesman Captain Jeff Davis said, "We have the same concern about the potential threat posed by violent homegrown extremists.”

Last March, Homeland Security Today reported that as 80 percent of Americans being polled were saying ISIS poses a serious threat to the United States, ISIS supporters were finalizing an English language hit-list of 100 US military personnel, including their photos and addresses. The list — which Homeland Security Today reviewed — began to be circulated on jihadi forums and social media on March 21.

The hit list was much like the hit list Al Qaeda supporters circulated on jihadist social media sites in June 2011 which Homeland Security Today first reported. The difference is the current list provides the home addresses of most of the service members on the new list, including top officers in very important command positions.

Eleven of the nation’s top military leaders were among 58 past and present military, corporate and civilian officials identified by members of the Al Qaeda-linked Ansar Al Mujahedeen jihadist forum as infidels who should be murdered, according to a jihadist “hit list” that accompanied a June 6, 2011 Florida fusion center bulletin.

“As in previous issues, this issue [of Inspire] contains an ‘Open Source Jihad’ section which contains specific instructions on how to carry out attacks in the West so that Muslims can ‘train at home instead of risking a dangerous travel abroad,” MEMRI said. “This feature in this issue of the magazine focuses on lone wolf operations, because, it says, they are less expensive to carry out. It also reveals that there are future plans for further articles dedicated to ‘a complete comprehensive assassination program appropriate for a Lone Mujahid operations in upcoming issues of the magazine.’”

“Explaining in depth about choosing a target, the article states that military or security personnel targets inside the US would require multiple operations on a larger scale,” MEMRI stated in an analysis of the current issue of Inspire. “Instead, it suggests smaller targets such as economic magnates, since this could help achieve the group’s goals over a shorter period of time. It states:"

"Selecting a target for assassination is divided into two categories; assassinating a target in order to achieve either strategic or tactical goals. As for us, we will be concentrating on operations that will yield strategic goals, directly affecting our war. As for tactical targets, such as assassinating military or security personnel inside America, its resulting effects do not surface unless after executing many operations of the like. And this cannot be realized except with the existence of a Jihadi organization inside America. And it requires a long period of time to execute these operations and requires other independent elements e.g. the masses and population to back you up in order to achieve success. That is why it is necessary for us to concentrate on targeting prominent personalities in order to achieve great goals in a short period."

The magazine provides detailed instructions on how to select a target and carry out an attack.

Another article, Charlie Hebdo Military Analysis, analyzed the stages involved in the operation. The first method listed is lone jihad, and explained that Inspire was instrumental in the attack on Charlie Hebdo that killed Stephane Charbonnier — the editor and cartoonist among the 10 journalists killed in the attack on the satirical newspaper’s Paris offices. Charbonnier had been listed as a target.
AQAP said the successful attack on Charlie Hebdo was because it had placed targeted persons on a wanted list that was distributed to Lone Mujahideen, adding, “This had no direct connection with the jihadi organization except by means of inspiring and guiding Lone Mujahideen. Inspire magazine was used as the medium to distribute this list. One of the wanted criminals on the list was Stephane Charbonnier."

AQAP takes credit for the operation and explained the group selected and trained Said Koachi, one of the radicalized Islamist jihadists who attacked Charlie Hebdo.

With Islamist jihadi attacks rising, counterterrorism officials who spoke to Homeland Security Today on background because they’re not authorized to discuss classified information, said they believe AQAP strategically timed the release of the latest issue of Inspire “while the iron is hot, so to speak,” as one stated.

And, perhaps coincidentally, the Islamic State (ISIS) — which has important ties to AQAP — simultaneously released the latest issue of its magazine, Dabiq, which largely deals with the ideology and practices of jihad and sharia law.

Interestingly, just like Inspire did by quoting coverage of AQAP by five media — including Homeland Security Today — the latest Dabiq reprints the article, Islamic State is Winning, America Must Soon Use its One Remaining Option, by Michael Scheuer, the former head of the CIA’s Usama Bin Laden unit.

Through its magazine, ISIS also offers a Norwegian and Chinese prisoner for sale in “a limited time offer.”