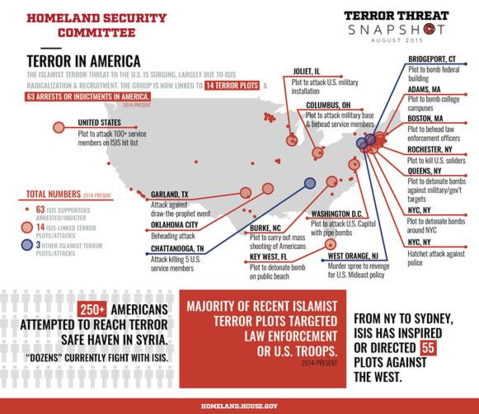 There have been more US-based jihadist terror cases in 2015 than in any full year since 9/11, and the total number of cases has increased three-fold in just five years (from 38 in July 2010 to 122 today), according to the latest “Terror Threat Snapshot” for August released today by House Committee on Homeland Security Chairman Michael McCaul (R-Texas).

The monthly assessment is the committee’s continuing effort to highlight the growing threat to America, the West and world from ISIS and other Islamist jihad groups.

“Terror struck the heartland in Chattanooga last month, a sobering reminder that a new generation of extremists is targeting our city streets,” McCaul said in a statement.”

Noting that, “We can’t stop what we can’t see, and with terror going viral—spreading online and across borders—I am worried more fanatics will go undetected until it’s too late,” he added, stressing, “We’ve got to do more to take the fight to the enemy overseas at its source, otherwise we’re going to see the threat picture here at home steadily worsen.”

McCaul warned that the terror threat level in the US is high, with jihadists increasingly targeting American troops and police. Since early 2014, the majority of Islamist terror plots on US soil have involved plans to kill US soldiers or law enforcement, when both ISIS and Al Qaeda have repeatedly called for during the last year in particular.

Globally, McCaul’s Terror Threat Snapshot for August stated, “ISIS is fueling the Islamist terror wildfire—and at unprecedented speed.  As of the end of July, the group had inspired or directed 55 terrorist plots/attacks against Western targets, including 14 in the United States.”

The snapshot noted that, “America and its overseas partners have largely failed to rollback the ISIS terror safe haven. Despite a year of airstrikes, US intelligence agencies have reportedly concluded ISIS is no weaker than a year ago and can field nearly 30,000 foot soldiers, including Americans and thousands of other Westerners.”

The “Terror Threat Snapshot” is a regular monthly product of the House Committee on Homeland Security that will track “the escalating and grave threat environment facing the United States, McCaul stated in first announcing the "snapshot" in June.

McCaul said the Terror Threat Snapshot will be kept up to date on the committee’s website, and that monthly summaries will be available.