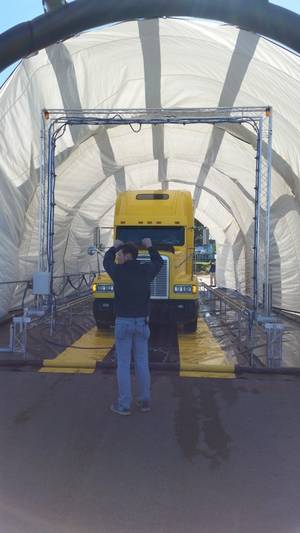 In an effort to improve food safety from specific threats to the food supply, such as animal-borne disease outbreaks to ensure they do not affect consumers, is the prime concern for the agricultural industry as it transports cattle, swine and other livestock across the country in the hundreds of millions each year.

To address these concerns, agencies like the United States Department of Agriculture (USDA) Animal and Plant Health Inspection Service (APHIS) play a critical role in preparing for specific threats to the food supply. One of the key elements to decreasing the effects of an outbreak is to decontaminate areas where animals have been located.

But this is no small feat, says the Department of Homeland Security’s (DHS) Science & Technology Directorate (S&T).

“The challenge, in the event of an outbreak, is the need to swiftly decontaminate many large trucks and tractor-trailers that have carried infected animals or contacted infected premises, sometimes to or from areas where freezing temperatures make decontamination difficult,” said Lori Miller, an environmental engineer with USDA, APHIS. “What’s more is the grueling process for first responders. Research from our Canadian partners shows the difficulty of effectively decontaminating a vehicle with what is currently a hand washing method.”

Research from the Canadian Food Inspection Agency found that a hand washing method in cold temperatures took four hours to disinfect a single vehicle. Responders had to don cumbersome equipment, including respirators, because of the harsh disinfectant chemicals and potential exposure to disease.

“We knew there had to be a better way,” noted Miller.

Miller, who is embedded with S&T, worked within the directorate’s Chemical and Biological Division to help find a solution,” DHS said in an announcement regarding S&T’s research. “The DHS Small Business Innovation Research (SBIR) program and Canadian agency partners were also key players in tackling this challenge. In a combined effort, the partners devised a solution—a portable wash decontamination tunnel that can operate in cold weather conditions, or more simply put, a portable cold-weather car wash of sorts.”

But, “Because such a capability does not exist yet,” DHS said, “SBIR identified Integrated Solutions for Systems (IS4S), a Huntsville, Alabama-based company specializing in engineering and management solutions, to develop this much-needed technology. S&T, along with Canadian agency partners and the US Environmental Protection Agency (EPA), contributed research and testing to ensure the efficacy of the product. Most recently they participated in a full scale test in January 2015 hosted by the Wisconsin Department of Agriculture, Trade and Consumer Protection, Division of Animal Health and USDA APHIS Veterinary Services at Volk Field in Camp Douglas, Wisconsin.”

Of particular note in the testing is the partnership between the United States and Canada, DHS said.

“Because of S&T’s Bilateral Agreement with the Government of Canada and the 2004 Agreement, the Cooperation in Science and Technology for Critical Infrastructure Protection and Border Security, S&T and the Canadian Food Inspection Agency were able to participate in the test as a joint international activity,” DHS said. “In addition to the bilateral agreement, these activities support White House objectives and key areas of cooperation outlined in the 2011 US-Canada Beyond the Border Action Plan Addressing Threats Early and enhancing security for Trade Facilitation.  With Canada’s study of the decontamination process and their participation in this most recent demonstration, both countries will benefit.”

“The technology had to be light and compact enough to transport with a pick-up truck, operable in freezing temperatures by one to two people, easily assembled in less than four hours with two to four people, operable with a variety of disinfectants such as bleach and peroxide, and self-contained so that run-off could be safely disposed,” Miller said. “Also, it couldn’t break the bank; it had to be affordable for the industry to purchase and place in key locations.”

In order to perform the test, DHS S&T said “researchers applied stainless steel test strips – called coupons—each about the size of a dime—to the vehicles. The coupons carried safe testing bacteria. Following the full-scale demonstration, researchers sent the test coupons to S&T’s Plum Island Animal Disease Center laboratory and an EPA facility in Raleigh, North Carolina to determine if the decontamination wash tunnel did, in fact, disinfect all the surfaces of the vehicles.”

“Test results will be available in the coming months,” DHS S&T said.

According to Miller, “The results of these tests could be game changing for response time to possible agriculture incidents. If it’s successful, this technology would empower the agricultural community to respond quickly and reduce the taxing efforts of first responders in the event of an outbreak—particularly in colder temperatures.”