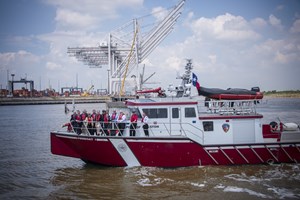 The tour highlighted unique aspects of the nation’s busiest port. CBP provided the group a demonstration of its Vehicle and Cargo Inspection System (VACIS) at the Port Authority’s Bayport Container Terminal.

The Port of Houston is a significant economic engine for the nation, generating nearly $500 billion of national economic activity and 2.1 million American jobs. It is the leading export port in the nation of petrochemical and energy products.

The Port of Houston has a robust and successful port security program that is based on the collaboration and cooperation of the 150 individual companies and terminals that comprise the overall port. The tour allowed members to see firsthand how the port functions and collaboratively coordinates safety and security measures. The Port of Houston Authority works closely with all its partners on the federal, state and local levels, as well as those in the private sector.

For more than 100 years, the Port of Houston Authority has owned or operated the public cargo-handling facilities of the Port of Houston, the nation’s largest port for foreign waterborne tonnage. The port is an economic engine for the Houston region, the state of Texas and the nation. It supports the creation of more than one million statewide jobs and more than 2.1 million nationwide jobs, and the generation of economic activity totaling more than $178.5 billion in Texas and $499 billion across the nation.