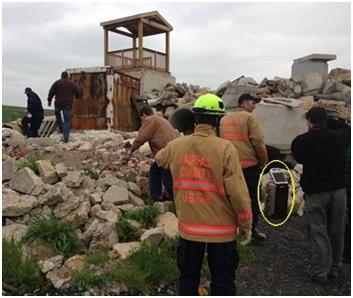 The final prototype of the Finding Individuals for Disaster and Emergency Response (FINDER)—a radar technology designed to detect heartbeats of victims trapped in wreckage— will be demonstrated May 7 at the Virginia Task Force ONE Training Facility in Lorton, Virginia by the Department of Homeland Security’s (DHS) Science and Technology Directorate (S&T) in partnership with the National Aeronautics and Space Administration’s (NASA) Jet Propulsion Laboratory (JPL).

S&T and JPL will demonstrate the technology – with the assistance of members of Virginia Task Force ONE – and transition it to a commercial enterprise where it can be manufactured and made available to search and rescue teams, DHS announced this week.

DHS had hoped the technology would have been ready to transition to the commercial market in the spring of 2014.

“FINDER has previously demonstrated capabilities of finding people buried under up to 30 feet of rubble, hidden behind 20 feet of solid concrete, and from a distant of 100 feet in open spaces,” S&T said. “A new ‘locator’ feature has since been added to not only provide search and rescue responders with confirmation of a heartbeat, but also the approximate location of trapped individuals.

This week, the FINDER technology began its first field deployment as it arrived in Nepal to be used in the search for victims trapped in the rubble from the recent earthquake.

Homeland Security Today earlier reported that NASA and DHS said FINDER “a first-of-its-kind portable radar device to detect the heartbeats and breathing patterns of victims trapped in large piles of rubble resulting from a disaster.”

S&T and JPL have been testing and developing several FINDER prototypes in recent months, according to DHS. Last June, DHS and first responders used the prototype to conduct more than 65 test searches with the Virginia Task Force One (VA-TF1) Urban Search and Rescue (US&R) team at the Fairfax County Fire Department training center, and the Virginia Task Force Two (VA-TF2) US&R team in Virginia Beach, Virginia.

“Testing proved successful in locating a VA-TF1 member buried in 30 feet of mixed concrete, rebar, and gravel rubble from a distance of over 30 feet,” said John Price, S&T program manager. “This capability will complement the current Urban Search and Rescue tools such as canines, listening devices, and video cameras to detect the presence of living victims in rubble.”

“JPL uses advanced data processing systems to pick out faint signals,” DHS said. “The microwave radar technology is sensitive enough to distinguish the unique signature of a human’s breathing pattern and heartbeat from other living creatures. The advantage of this technology is in allowing first responders to quickly ascertain if a living victim is present in the debris. The technology is sensitive enough that victims, whether conscious or not, can easily be detected, which helps responders decide the most efficient course of action.”

"FINDER is bringing NASA technology that explores other planets to the effort to save lives on ours," Mason Peck, chief technologist for NASA, said in a statement. Peck is the principal advisor on technology policy and programs.

"This is a prime example of intergovernmental collaboration and expertise that has a direct benefit to the American taxpayer,” Peck said.

"The ultimate goal of FINDER is to help emergency responders efficiently rescue victims of disasters," said John Price, program manager for the First Responders Group in DHS’s S&T Directorate. "The technology has the potential to quickly identify the presence of living victims, allowing rescue workers to more precisely deploy their limited resources."

In an earlier joint announcement, DHS and NASA explained that “The technology works by beaming microwave radar signals into the piles of debris and analyzing the patterns of signals that bounce back. NASA’s Deep Space Network regularly uses similar radar technology to locate spacecraft. A light wave is sent to a spacecraft, and the time it takes for the signal to get back reveals how far away the spacecraft is. This technique is used for science research, too. For example, the Deep Space Network monitors the location of the Cassini mission’s orbit around Saturn to learn about the ringed planet’s internal structure.”

The Deep Space Network, managed by JPL, is an international network of antennas that supports interplanetary spacecraft missions and radio and radar astronomy observations for the exploration of the solar system and the universe. The network also supports selected Earth-orbiting missions.

"Detecting small motions from the victim’s heartbeat and breathing from a distance uses the same kind of signal processing as detecting the small changes in motion of spacecraft like Cassini as it orbits Saturn," said James Lux, task manager for FINDER at JPL.

“In disaster scenarios, the use of radar signals can be particularly complex,” DHS and NASA explained. “Earthquakes and tornadoes produce twisted and shattered wreckage, such that any radar signals bouncing back from these piles are tangled and hard to decipher. JPL’s expertise in data processing helped with this challenge. Advanced algorithms isolate the tiny signals from a person’s moving chest by filtering out other signals, such as those from moving trees and animals.”