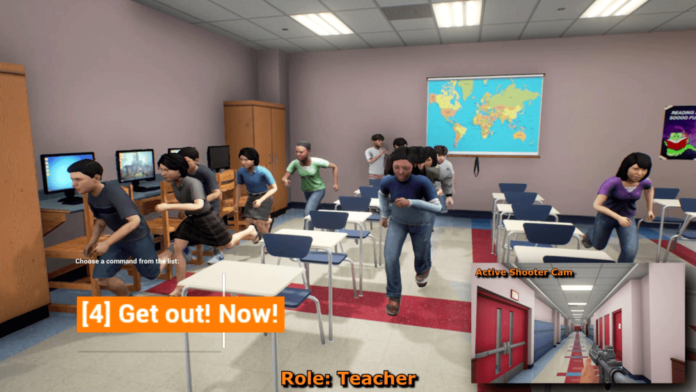 A virtual training platform that prepares first responders for active shooter incidents is being adapted and rolled out for schools.

EDGE (Enhanced Dynamic Social Environment) simulates an active shooter situation and allows participants to practice their response to minimize the risk to life. It was initially developed to provide a multi-disciplinary environment for police, firefighters, EMS, dispatch and command-and-control personnel to train together in an active shooter or other critical incident scenario but has been so useful it is now being adapted and rolled out to schools.

The original version of the online training program, developed by the DHS Science and Technology Directorate, Army Research Lab and Cole Engineering, simulates a hotel, which was chosen specifically because of the variety of rooms. “That initial scenario used a hotel setting, which enabled a multitude of environments to train in – everything from large event rooms, to individual hotel rooms, basements, utility rooms, kitchens, restaurants, etc.,” said John Verrico, chief of media relations, DHS Science and Technology Directorate. “This also allowed for training for a variety of scenarios, including active shooter, hostage situations, fire and arson, and other incidents. This is vitally important for cross-disciplinary training in the first responder realm.”

The aim for first responders is to hone collaborative response efforts, and to reinforce live training for crisis scenarios, especially where it’s not practical or possible to get all the groups of responders together to train.

EDGE is built on the UNREAL gaming platform, which underpins games like Mortal Kombat, BioShock and Batman and it uses avatars to interact and engage in role-play. DHS is keen to clarify, though, that although it is built on gaming technology, EDGE is not a ‘game’ in the conventional sense. “This is not a ‘game’ that one plays. If anyone were to somehow get into the program, there would be nothing to interact with and they would find themselves simply in an empty school structure,” Verrico said. “Instead, the platform is part of a larger training effort where participants can take on different ‘roles’ in a crisis scenario, which for first responders is vital to coordinate their response.”

When EDGE is rolled out to schools, it will focus solely on active shooter scenarios. While it’s a particularly unpalatable prospect, unfortunately such incidents are a reality. According to gun-control advocacy group Every Town for Gun Safety, there have been 300 school shooting incidents in the United States since 2013.

Developers have researched the details of real-life school shootings, talking to survivors and victims’ families to create realistic reactions and occurrences within the simulation. There are six roles that the trainees can practice as – teacher, school administrative staff, law enforcement, school resource officer, student, and suspect – because each school will deal with the situation differently depending on staffing structure. The program can also integrate different safety features that a school might have, so trainees can lock specific doors or windows, for example, while working through the incident.

For schools, the focus of EDGE is training staff to respond to an active shooter before law enforcement arrives on the scene, and essentially maximizing survivability. School administrators and teachers can practice in the different roles, figure out the best response and, although the platform is not designed for student use, trainees could pass on what they’ve learned in live drills.

EDGE has developed into an incredibly useful training resource for first responders, with 520 agencies using the platform across 48 states. DHS hopes it will be just as valuable for schools when it is launched in the spring. Like the initial version of EDGE, it will be free for verified school systems administrators and law enforcement agencies. For more information about EDGE or to sign up for the free hotel scenario, or the school scenario once a launch date is officially announced, email first.responder@hq.dhs.gov.