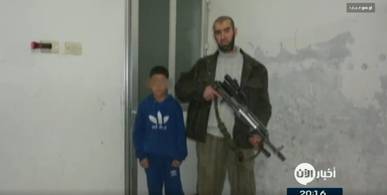 A reputed Tunisian citizen named Fadhel Mensi, aka Abu Yusri Al Tunisi, is ISIS’s drone engineer, according to the Dubai-based TV network, Akhbar Al An, which broadcast a news report revealing the alleged identity of Mensi and featured his nom de guerre, images and other personal details.

The report “starts by explaining that the piece came after a 2GB hard drive that was found in one of ISIS’s headquarters in northern Syria was given to Akhbar Al An researchers. According to Musa, cross referencing the material on the hard drive led researchers to the engineer’s real identity," said the Middle East Media Research Institute (MEMRI), which monitors jihadists’ social media sites. "One document on the hard drive revealed that Al Tunisi was working to increase ISIS’s attack drones’ weight limit to enable them to carry up to 20 kg of explosives."

Additional research by MEMRI indicates the engineer may be from the Tunisian town Siliana.

According to MEMRI, “Musa said that the thousands of files recovered from the hard drive included images of drones as well as a document written on ISIS Aleppo Province letterhead in which Al Tunisi presents a drone project codenamed ‘Ababil’ to ISIS command. Al Tunisi wrote in the document that he is a 47-year-old electrical engineer specializing in aerodynamics and aviation.”

Al Tunisi wrote that "the purpose of Project Ababil is to arm drones with 20 kg of explosives."

Increasing a drones’ weight limit to carry 20 kg of explosives is a “dramatic and dangerous development,” authorities said.

“Today’s civilian drone – whether purchased as a single platform or assembled from disparate component parts – offers significant tactical advantages to terrorists. Strap a conventional explosive to a drone, and you have a remote control precision-guided bomb that can be flown into or onto a target of choice. The drone offers the advantage of evasion, as the operator does not have to plant the bomb at the target before detonation or get close to the target as would a suicide bomber, making identification and interdiction more difficult for law enforcement,” wrote Ben Lerner, a vice president at the Center for Security Policy, and Grant A. Begley, who previously served as Pentagon Senior Advisorfor UAS/Drones in the Office of the Under Secretary of Defense, in the May 2016 issue of Homeland Security Today.

Lerner and Begley wrote that a the “Nuclear Security Summit in Washington DC [a year ago], British Prime Minister David Cameron made the ominous assessment that ISIS is seeking to use drones to detonate ‘dirty’ bombs over Western cities. While Cameron and other world leaders are right to be concerned about the prospect of more ISIS attacks on metropolitan targets, this particular scenario said much more about the evolving threat of the drone as an effective terrorist weapon than that of a dirty bomb or radiological dispersion device.”

“In the wrong hands, UAS can become a security hazard,” Betsy Yates, MITRE’s Public Affairs Lead for MITRE’s Countering Unauthorized Unmanned Aircraft Systems Challenge told Homeland Security Today. “They’re small enough that they can be transported inconspicuously in backpacks and launched from anywhere, but the combination of payload capabilities, range, GPS-enabled accuracy, and ability to control them from a safe distance could enable their use with little threat of detection.”

According to MEMRI, “After receiving the hard drive, Musa and her colleagues managed to connect the nom de guerre Abu Yusri Al Tunisi to the name Fadhel Mensi. They located four Facebook accounts with similar names, one of which contained a cover photo of a family, which matched a photo recovered from the hard drive. This strengthened the belief that Abu Yusri Al Tunisi was in fact Fadhel Mensi. This account led to another Facebook account run by Mensi under the name Abu Yusri. A comparison of a photo from that account to photos recovered from the hard drive indicated it was the same person. The hard drive also contained family photos from a January 2015 trip to Syria. Musa said the network has no information on Mensi’s current whereabouts and do not know if he is in Syria or Tunisia, or if he is living or dead."

MEMRI said “additional research” it performed indicates that both of Fadhel Mensi’s Facebook accounts are still open, but no new content has been posted to them since April-May 2015. The Fadhel Mensi account has 12 friends, including the Abu Yusri account, which belongs to Mensi as well. According to the information on this account, Mensi studied at the Lycée Secondaire de Bargou in Siliana, Tunisia. Some of Mensi’s Facebook friends who share his last name also live in Siliana, indicating that it is his hometown. Another Facebook friend of Mensi’s named Pacha Isk, who last posted to his account in January 2015, includes a few images that are all associated with ISIS, such as pictures of ISI leader Abu Mus’ab Al Zarqawi and more. This indicates the possibility that this is another account run by Mensi himself.”