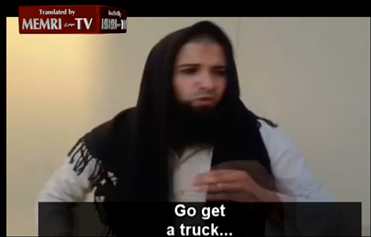 Two weeks before 31-year-old Tunisian Muslim emigre Mohamed Lahouaiej Bouhlel massacred at least 84 people when he drove a rented 19-ton Renault truck for more than a mile along a Nice, France beachfront roadway filled with Bastille Daycelebration crowds, a video was released using a Telegram channel managed by French ISIS fighters, likely in Mosul, in which an ISIS fighter called for French jihadists to use large trucks to carry out mass killings of “infidels.”

The ISIS fighter said in his video posted on Telegram June 29, "Go get a truck” … After [Sheikh Abu Muhammad Al Adnani Al Shami, a senior ISIS leader and emir of ISIS in Syria, “made his speech [calling upon ISIS supporters to carry out attacks in the West], adding, “In France, you have access to gas tanks, to trucks, and to many products that can cause a disaster, Allah be praised. We are not asking you to carry outa nuclear attack. Just kill five infidels, and end up a martyr. That would be preferable than you coming here and committing martyrdom, killing 100 people.”

Continuing, the ISIS fighter admonished, "Now, my brother, let us be honest with one another. Let me tell you the truth: There aren’t many of us here, but there are enough of us for the infidels. Allah be praised, we are facing the beast. We are breaking its teeth, and we hope to chop off its head. But you are in the belly of the beast, my brother. So if you want Islam to be victorious, why would you want to come out of the beast and face its fangs, when you could tear out its heart and its liver? That is what I am asking you. Sheikh Adnani gave you a very clear (message). He said, ‘If they close the door on your hijra, open the doors of jihad on them, and make them regret it.’ Brother, tear up your ticket to Turkey. Allah is right in front of you, brother. In the name of Allah, proceed. Don’t say: ‘I’m all alone, without any weapons.’ It is very easy to obtain weapons. Crooks may be quite clever, but they are in the material world. Just don’t let them know that this is for religious purposes. Make up some story, and you can find a weapon in any neighborhood.”

"Planes sowed black clouds. Make sure you are the one who causes them to harvest the lightening of Allah."

According to reports since the attack in Nice, the uncle of Bouhlel said Bouhlel had been indoctrinated two weeks before the attack by an Algerian member of an Islamic State group, or cell, operational in Nice, which counterterrorism authorities there have long known has hotbeds of jihadi radicalization in Muslim enclaves throughout the city and surrounding region.

Certainly Bouhlel displayed “a certain recent interest for radical jihadist movements,” said Paris prosecutor Francois Molins, who oversees terrorism investigations. He added that people close to Bouhlel said Bouhlel started growing his beard for Muslim religious reasonsand stated ISIS should have a caliphate. Photos and videos regarding to radical Islam and ISIS were found on his cellphone and computer, including searches “on a near-daily basis” for information on chapters of the Quran; nasheeds – chants used by jihadist groups; Eid Al Fitr, the end of Ramadan; and the jihadi attacks in Orlando, Dallas and Magnanville, France.

"This is someone who was already deeply disturbed and had already been on a journey, and at the end of it, maybe there was what looks like a rapid process of radicalization,” Dr. Raj Persaud, a consultant psychiatrist and professor at London’s Gresham College,” was quoted as saying, noting Bouhlel’s path toward Islamist jihadism might have been taking place for a longer period of time.

“But that was just what crystallized his beliefs, a lot of the huge transformation had already occurred in the background," Persaud said.

According to the Middle East Media Research Institute (MEMRI), which monitors jihadi social media, on July 17, 2016, ISIS’s media branch Furat released the five-page will and testimony of Khalid El Bakraoui, aka Abu Walid Al Beljiki, who carried out the March 22, 2016 suicide bombing at the Maelbeek metro station in Brussels as part of simultaneous ISIS attacks in Belgium.

“ISIS previously released the wills of the Paris attackers in its French-language magazine, Dar Al Islam.”

MEMRI said, “The timing of the release, the content of the will and its language suggest El Bakroui may not have authored the text himself, or that it may have been heavily edited by ISIS media so it would be appropriate for propaganda purposes.”

MEMRI explained that, “The will was written as a message to the West, as well as a call to Muslims in the West to join ISIS and carry out attacks in its name. In it, El Bakraoui focuses mainly on the suffering of Muslims around the world, accusing the West of massacring the Muslim peoples without any accountability. Denouncing the West’s ‘crusader’ war against Islam, he emphasizes the role of France and its allies in it. He mentions Belgium and Saudi Arabia as providing logistical support to the ‘crusaders’ and thus participating in the ‘genocide,’ and encourages jihad fighters all over the world, for instance, telling those in Moroccan prisons, ‘Our brothers are already in Libya, they are approaching, do not despair.’ He dedicates special prayers to ISIS in the Sinai and points to it as an example to emulate."

“The will threatens the West and presents jihad as a personal obligation, to be carried out by every Muslim by any means, as per the orders of ISIS spokesman … Al Adnani,” MEMRI said, noting that, “Cursing Salafi preachers who do not support global jihad, as well as Al Qaeda-aligned groups who reject ISIS’s authority, El Bakraoui addresses the ‘polytheists’ and promises ‘blood for blood and destruction for destruction,’ adding that ‘a new generation has emerged’ that will avenge the Muslims.”

He added that the only answer to the infidels will be "a knife to your throat, explosive belts to blow you up, or a burst of Kalashnikov [fire], or any other means to strike terror into your hearts."

“He further denounces the West, its values, beliefs and habits, such as the theory of evolution, the treatment of women, pornography, prostitution and same-sex marriage – all, he says, signs of the West’s deprivation and unbelief,” MEMRI reported.

"Is it not also for these reasons that the Caliph has ordered us to bring fire and sword to the West?" El Bakraoui concluded. He also “justifies terrorism, particularly murdering civilians, women and children,” and, MEMRI said, “’The crusaders are practitioners of genocide’ who ‘understand only violence.’ Explaining further how each citizen is responsible for having chosen their government and for not having protested against military engagement, El Bakraoui notes the asymmetrical aspect of the war between the ‘Muslims and the crusaders’ and thus justifies using any means and targeting any person in the West.”

MEMRI said, “The will ends with a pledge of allegiance to ISIS leader Abu Bakr Al Baghdadi, a threat to the West promising ‘horror until you put an end to cowardly and barbaric bombardments, and release our brothers and sisters from prison,’ and a short message to fellow ISIS fighters calling on them to be steadfast.”