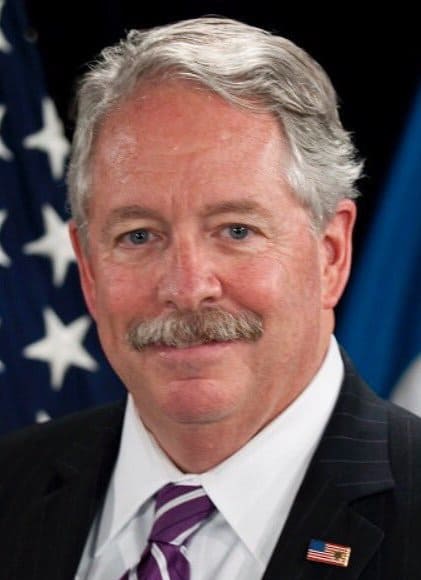 Mr. James F. McDonnell was selected to serve as the acting Assistant Secretary for the Department of Homeland Security’s (DHS) Countering Weapons of Mass Destruction (CWMD) Office.  The mission of the newly-established CWMD Office is to counter attempts by terrorists or other threat actors to carry out an attack against the United States or its interests using a weapon of mass destruction.  Prior to this position, Mr. McDonnell was appointed by President Trump in June 2017 to serve as the Director of the DHS Domestic Nuclear Detection Office (DNDO).

Mr. McDonnell is a recognized expert in the area of WMD-related terrorism. He enlisted in the Navy in 1975 and retired as a commissioned officer after twenty years of service in special operations and counterterrorism. After leaving the Navy, he founded the National Security Programs business unit at Oak Ridge Associated Universities and managed a number of terrorism-related national security activities, including restructuring the technical response by the U.S. to nuclear terrorism threats.

Mr. McDonnell has senior executive experience in the federal government and the private sector, where he directed security, police, and other risk management functions. He has served in the Senior Executive Service in DHS, the Department of Energy, and the White House. Following the terrorist attacks of September 11, 2001, Mr. McDonnell became the founding director of the Department of Energy’s Office of Energy Assurance, which is responsible for the protection of the nation’s energy infrastructure.

When President George W. Bush announced the creation of DHS, Mr. McDonnell moved to the Homeland Security Transition Planning Office within the White House to begin the work of building the Department’s infrastructure protection capability. As part of the original executive leadership team at the Department, he was responsible for the initial development and management of today’s Infrastructure Protection Office. He formed and directed the development of several national programs at the Department, which included management of security activities through several high-threat periods, the development of a National Protection Plan, and the implementation of the Buffer Zone Protection Plan.

Mr. McDonnell received his Bachelor of Science degree from Regents College, University of the State of New York, and earned a Master of Arts degree from Georgetown University. He also attended Harvard University’s Senior Executives in National and International Security program. He has volunteered his time on boards, task forces, and advisory committees, with a focus on homeland security policy and community preparedness and response. Mr. McDonnell has published an article on nuclear terrorism response, as well as a book on domestic terrorism incidents. He has contributed to publications addressing corporate security, homeland security, and critical decision-making.