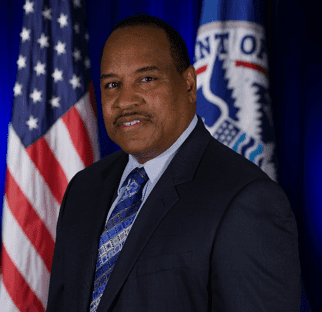 After over 36 years in the federal government, USCIS veteran Keith Jones announced his retirement effective Oct. 3.

Jones began his federal career in Los Angeles in an entry-level position with the former U.S. Immigration and Naturalization Service in 1982. He was appointed to the Senior Executive Service(SES) in 2008. His ascension to the SES was regarded as a testament to his commitment to public service demonstrating leadership, vision and recognition of our nation’s most critical asset – “people” – for their hard work and dedication to the mission.

During his tenure at USCIS, Jones worked to implement the IT strategic vision of the agency in providing innovative and secure services to enable the USCIS mission. As principal deputy CIO, Jones was responsible for the oversight and management of agency-wide CIO Initiatives with the annual execution of an $800 million budget in total for service delivery to over 20,000 internal customers. His leadership was instrumental in the modernizations and migration of legacy infrastructure and applications into a cloud environment for USCIS. The adoption of cloud services has allowed USCIS systems to leverage a modernized infrastructure with frequent releases occurring via an automated pipeline and deployments to production. USCIS successfully deploys over 350 application releases to production over a fiscal year.

Jones formerly served as deputy executive director of the DHS Information Technology Services Office, where he was responsible for the oversight and management of department-wide infrastructure services, a $900 million-plus budget for service delivery to some 8,500 headquarters users. His primary focus was the integration, consolidation and transformation of component infrastructures into a single world-class system capable of supporting the significant demands required of an organization of more than 250,000 DHS government employees while leading a diverse workforce of program executives and staff.

Prior to his headquarters appointment as a senior executive, Jones served as deputy chief information officer at Immigration and Customs Enforcement. He was the founder of the ICE Career Connections Mentoring Program launched in 2008, which provided an opportunity for both mentees and leaders across the agency an opportunity to enhance their careers and leadership skills through the development of dynamic mentoring partnerships.

After 36 years of federal service, he has yet to announce where he will go outside of the federal government; however, there’s speculation Jones will work in private industry and continue to provide value-added services across government.