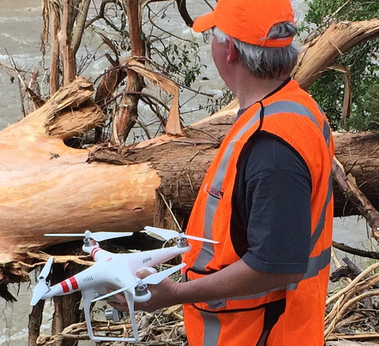 A test-site research team from the Lone Star Unmanned Aircraft Systems Center of Excellence & Innovation (LSUASC) at Texas A&M University-Corpus Christi was dispatched to Wimberley, Texas to conduct low-altitude research flights in the wake of the devastating flooding there.

“Our hearts go out to those who have suffered great losses in Hays County,” said Dr. Flavius Killebrew, president and CEO of Texas A&M University-Corpus Christi. “We are making every effort to support recovery efforts there with tools we believe will be of value to state and local emergency-management personnel.”

“We will survey land areas, including bridge and critical infrastructure and roadways,” he said. “It will be a general aerial assessment of damage due to storm and flooding.”

The LSUASC test-site team of three people were based at a private ranch about five miles north of Wimberley to conduct low-altitude flights to assess damages related to the deadly storm that flooded the Blanco River. The team worked through Thursday and continued their efforts through Friday.

The research “assist[ed] in determining the process for use of UAS as a rapid-response tool in natural emergencies and the value of operating at 200 feet or less for aerial surveillance under such conditions,” Hendrix said.

The LSUASC team has been supported by Dr. Robin Murphy, director of the Center for Robot-Assisted Search and Rescue at Texas A&M University in College Station. A team from Dr. John Valasek’s Center for Autonomous Vehiclesand Sensor Systems at A&M stood by to join the LSUASC effort.

“This new authorization gives us a great deal of latitude in assisting state agencies as they test UAS capabilities in fulfilling their statutory missions,” said Dr. Luis Cifuentes, vice president for Research, Commercialization and Outreach at A&M-Corpus Christi and interim executive director of LSUASC. “Our test-site program has been designed by the FAA to support government agencies and private-sector companies as they safely integrate UAS into their operations.”