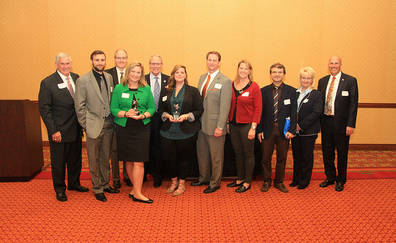 “These researchers promote the research capabilities of the University of Nebraska and directly contribute to the missions supporting our national security and the readiness of our military personnel, said NSRI Executive Director, retired Air Force Lt. Gen. Robert Hinson.

Hinson said the newest UARC in the nation, ramped up in 2012, had, “Lots of bumps in the road, lessons learned and growing pains in understanding and executing a process that involves two very diverse cultures: the University and its four separate campuses and the rules and regulations of the Department of Defense … but we “recognize our research superstars, without whom none of our successes would have been possible.”

“The NSRI UARC started with four base task order contracts in 2012, and this year we will have signed on more than 60 task orders, valued at over $42.5 million,” Hinson said.

Task orders are research contract awards from Department of Defense (DoD) sponsor agencies. NSRI receives funding from project sponsors through contracts with US Strategic Command (USSTRATCOM), as well as other contracts and grants to provide research solutions directly impacting DoD operations and national security in the areas of combatting weapons of mass destruction.

Hinson commented that the three awardees have repeatedly paved the way for the success of NSRI and NU in proving the value and potential of their work.

Dennis Alexander, the Kingery Professor of Electrical Engineering, head of the Laser Science and Engineering Research (LaSER Lab) and the director of the Center for Electro-Optics and Functionalized Surfaces (CEFS) at the University of Nebraska-Lincoln (UNL) NSRI research projects include laser-based remote detection techniques including femtosecond pump-probe techniques, the functionalization of metallic surfaces to achieve extraordinary surface properties through femtosecond laser surface processing techniques, and all-optical data networks.

Hinson said Alexander is an “exceptional scientist and mentor for this project and others contributing to the reputation of the university and directly supporting the DoD.”

Wally Buchholz is professor and director of the Biological Process Development Facility at UNL. His fundamental microbiology research program has focused on microbial adaptation and microbial forensics capabilities needed to investigate biological outbreaks, whether natural or nefarious. His research on the manufacture of recombinant ricin vaccine was one of NSRI’s early research projects and will continue for several years.

Hinson noted that Buchholz was recently awarded a significant contract opportunity to assess cyberbiosecurity while securing the emerging domain of biomanufacturing.

Jim Talmandge, professor in Pathology and Microbiology at UNMC and a nationally recognized expert in bacteriology and veterinary pathology has focused on immune pathologic interactions and therapeutic interventions in chronic disease states emphasizing neoplasia, inflammation and infectious diseases. Most recently, his laboratory has focused on the development, manufacture and delivery of cellular and gene therapeutics to patients.

“Derrick is always a champion for his colleagues and the many special capabilities they represent, always enthusiastic about his research and the contributions it can bring to the warfighter and always takes on responsibilities for mentoring new students and faculty in working the difficult problems,” Hinson said.

Derrick is a professor of management at UNO, director of research and development in the Center of Collaboration Science and co-director of the Commerce and Applied Behavior Lab in the College of Business. He’s been involved in several task order contracts with NSRI and USSTRATCOM, and is a program manager supporting the USSTRATCOM Strategic Leadership Fellows Program. Additionally, he has led the Advanced Collaboration Enterprises Services (ACES) program that’s used to support participants in National Level Exercises across separate locations.

Part of the responsibilities of the NSRI as a UARC is to grow the next generation of research scientists to support the DoD and other agencies. Two student awards were presented this year.

Gary Roth was presented the NSRI Exceptional Undergraduate Research Student award. Roth is pursuing a Bachelor of Science degree in computer and information systems at UNO. Hinson said he was instrumental in assisting with the creation of labs and hands-on exercises for an NSRI task order and educating USSTRATCOM personnel in security for industrial control systems.

Dr. Craig Zuhlke was presented the NSRI Exceptional Post-Doctoral Research award. A research assistant professor in electrical engineering at UNL who worked as a postdoctoral research associate for NSRI researcher, Dr. Dennis Alexander, Zuhlke has dedicated himself to conducting research on behalf of NSRI’s government sponsors and has demonstrated outstanding team leadership.

The NSRI Team Excellence award was presented to the USSTRATCOM Strategic Leadership Fellows Program for teamwork across NSRI collaborative efforts and support of the NSRI’s UARC sponsor, USSTRATCOM. Hinson said “it’s often a very real challenge to develop a very diverse team approach with so many superstars across the many disciplines of the University.” But, “This year we believe there can be no better example of true teamwork than that presented by the USSTRATCOM Strategic Leadership Fellows Program.”

The cross-discipline, cross-campus program supports the academic progression of the USSTRATCOM civilian workforce.

Director of CBRNE Counterproliferation and Defeat at NSRI and program manager for one of NSRI’s largest contracts, Hinson said, “Give [Cunningham]  a task and he will tackle it with bulldoggish zeal. Cunningham has taken ownership of developing the NSRI’s new National Capital Region office and has done an exceptional job in creating a huge capability for the University and NSRI that will be second to none.  He has taken on coordinating the lease and internal construction of a superb conference center capability for the new 19,000 square foot space that will allow us to conduct training and executive level exercises.”

In addition to research scientists from across the University ofNebraska, the NSRI Researcher Recognition event brought together NU leadership, NSRI leadership and support staff, as well as leaders from USSTRATCOM for faculty experts and staff to network and discuss the future of NSRI and NU research.

NSRI is “committed to being the advocate for researchers and their significance to combatting some of the most challenging threats to our warfighters,” Hinson said, emphasizing the the award winners’ “contributions to our national security cannot be understated.”