Manufacturers of UV disinfection devices and regulators can use these results to help inform how long surfaces in medical settings, airplanes, or even liquids should be irradiated. 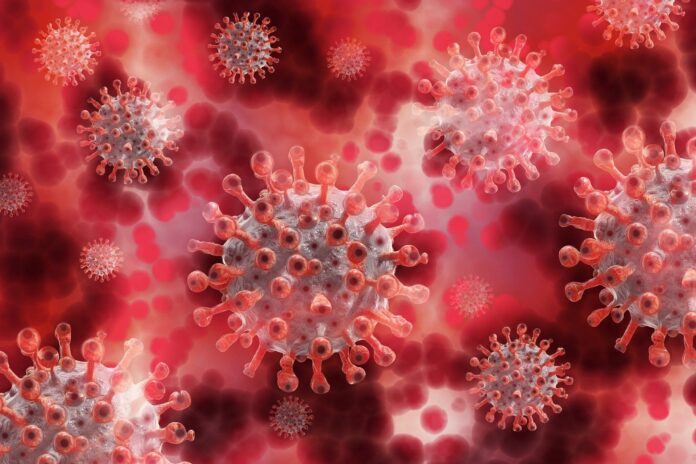 To disinfect a surface, you can illuminate it with a blast of ultraviolet (UV) light, which is bluer than the human eye can see. But to specifically inactivate SARS-CoV-2, the virus that causes COVID-19, which wavelengths are best? And how much radiation is enough?

Answering those questions requires scientists to overcome two main obstacles. First, they need to separate the virus completely from extraneous substances in the environment. Second, they need to illuminate the virus with a single wavelength of UV light at a time, with minimal changes to the experimental setup between tests.

A recent collaboration between the National Institute of Standards and Technology (NIST) and the National Biodefense Analysis and Countermeasures Center (NBACC), a U.S. Department of Homeland Security Science and Technology Directorate laboratory, overcame both these obstacles and completed what may be the most thorough test ever conducted of how several different UV and visible wavelengths affect SARS-CoV-2.

In a new paper published this week in Applied Optics, the collaborators describe their novel system for projecting a single wavelength of light at a time onto a sample of COVID-19 virus in a secure laboratory. Classified as Biosafety Level 3 (BSL-3), the lab is designed for studying microbes that are potentially lethal when inhaled. Their experiment tested more wavelengths of UV and visible light than any other study with the virus that causes COVID-19 to date.

So, what is SARS-CoV-2’s kryptonite? As it turns out, nothing special: The virus is susceptible to the same wavelengths of UV light as other viruses such as those that cause the flu. The most effective wavelengths were ones in the “UVC” range between 222 and 280 nanometers (nm). UVC light (full range from 200 to 280 nm) is shorter than the UVB wavelengths (280 to 315 nm) that cause sunburn.

Researchers also showed that the virus’s surroundings can have a protective effect on the virus. In the study, it took a smaller UV dose to inactivate viruses when they were placed in pure water than when they were placed in simulated saliva, which contains salts, proteins and other substances found in actual human saliva. Suspending the virus in simulated saliva creates a situation similar to real-world scenarios involving sneezes and coughs. This may make the findings more directly informative than those of previous studies.

“I think one of the big contributions of this study is that we were able to show that the kind of idealized results we see in most studies don’t always predict what happens when there’s a more realistic scenario at play,” said Michael Schuit of NBACC. “When you have material like the simulated saliva around the virus, that can reduce the efficacy of UV decontamination approaches.”

Manufacturers of UV disinfection devices and regulators can use these results to help inform how long surfaces in medical settings, airplanes, or even liquids should be irradiated to achieve inactivation of the SARS-CoV-2 virus.

“Right now, there’s a big push to get UVC disinfection into the commercial atmosphere,” said NIST researcher Cameron Miller. “Long-term, hopefully this study will lead to standards and other methodologies for measuring UV dose required to inactivate SARS-CoV-2 and other harmful viruses.”

This project built upon earlier work the NIST team did with another collaborator on inactivating microorganisms in water.

Depending on the wavelength, UV light damages pathogens in different ways. Some wavelengths can damage microbes’ RNA or DNA, causing them to lose the ability to replicate. Other wavelengths can break down proteins, destroying the virus itself.

Even though people have known about UV light’s disinfection abilities for more than a hundred years, there’s been an explosion in UV disinfection research in the past decade. One reason is that traditional sources of UV light sometimes contain toxic materials such as mercury. Recently, use of nontoxic LED lamps as a UV light source has mitigated some of these concerns.

For this study, the NIST collaborators worked with biologists at NBACC, whose research informs biodefense planning on biological threats such as anthrax and Ebola virus.

“What NBACC was able to do was grow the virus, concentrate it, and remove everything else,” Miller said. “We were trying to get a clear message of how much light we need to inactivate just the SARS-CoV-2 virus.”

In the study, the team tested the virus in different suspensions. In addition to using the saliva mimic, scientists also put the virus in water to see what happened in a “pure” environment, without components that could shield it. They tested their virus suspensions both as liquids and as dried droplets on steel surfaces, which represented something that an infected person might sneeze or cough out.

NIST’s job was to direct the UV light from a laser onto the samples. They were looking for the dose required to kill 90% of the virus.

With this setup, the collaboration was able to measure how the virus responded to 16 different wavelengths spanning from the very low end of the UVC, 222 nm, all the way up into the middle part of the visible wavelength range, at 488 nm. Researchers included the longer wavelengths because some blue light has been shown to have disinfecting properties.

No Piece of Cake

Getting the laser light onto the samples in a secure lab was not trivial. Researchers in a BSL-3 lab wear scrubs and hoods with respirators. Leaving the lab requires a long shower before changing back into civilian clothes.

Equipment such as the team’s expensive laser would have had to undergo a considerably more severe sterilization procedure.

“It’s sort of a one-way door,” Miller said. “Anything coming out of that lab has to be either incinerated, autoclaved [heat-sterilized], or chemically disinfected with hydrogen peroxide vapor. So, taking our $120,000 laser in was not the option we wanted to use.”

Instead, the NIST researchers designed a system where the laser and some of the optics stood in a hallway outside the lab. They piped the light through a 4-meter-long fiber optic cable that passed through a seal under a lab door. Negative pressure kept air flowing from the hallway into the lab and prevented anything from leaking back out.

The laser produced a single wavelength at a time and was fully tunable so that researchers could produce any wavelength they liked. But because light bends at different angles depending on its wavelength, they had to create a prism system that changed the angle at which the light entered the fiber so that it lined up properly. Changing the exit angle involved manually turning a knob they created to adjust the position of a prism. They tried to make it all as simple as possible, with a minimal number of moving parts.

“The device that the NIST team came up with allowed us to rapidly test a very wide range of different wavelengths, all at very controlled and precise wavebands,” Schuit said. “If we were trying to do the same number of wavelengths without that system, we would have had to juggle a bunch of different types of devices, each of which would have produced wavebands of different widths. They would have required different configurations, and there would have been a lot of additional variables in the mix.”

Manipulating the light required mirrors and lenses, but the researchers designed it to use as few as possible, because each one leads to a loss in intensity for UV light.

For the materials that had to enter the lab to project the light from the fiber onto the samples of COVID virus, the team tried to use inexpensive parts. “We 3D-printed a lot of things,” said NIST physicist Steve Grantham, a key member of the team along with NIST’s Thomas Larason. “So, nothing was really expensive and if we don’t ever use it again, it’s not a big deal.”

Even communicating between the laser area and the inside of the lab was difficult because people could not go in and out as they pleased, so they employed a wired intercom system.

Despite the challenges, the system worked surprisingly well, Miller said, especially given that they only had months to put it together. “There’s a couple areas we probably could improve on, but I think our gains would be minimal,” Miller said.

The NIST team plans to use this system for future studies of other viruses and microorganisms that biologists at high-security labs might want to conduct.

“When the next virus comes along, or whatever pathogen they’re interested in, all we have to do is roll the laser system up there, push a fiber under there, and they’ll connect it to their projector system,” Miller said. “So now we’re ready for the next time.”

This work was funded in part by the Department of Homeland Security Science and Technology Directorate.