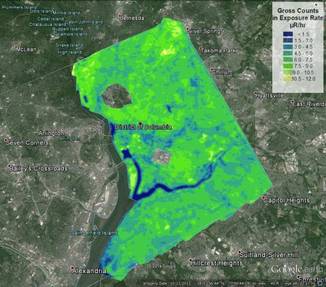 This month, the Department of Energy’s National Nuclear Security Administration (NNSA) will measure naturally occurring background radiation levels as part of a radiation assessment that will cover an approximately 25 square mile area near downtown Boston, Mass. to establish baseline levels of radiation as part of a security and emergency preparedness program.

This NNSA activity is part of a longstanding effort by the government to establish baseline levels of naturally occurring background radiation in large metropolitan cities that can be used in the event of a dirty or nuclear bomb threat by comparing the baseline data to unnatural spikes in certain types of radiation in an attempt to identify the location of a bomb or bombs.

Performed as part of NNSA’s Aerial Measuring System (AMS), the data “is … used to produce maps of radiation exposure and contamination. This technical information is later used to determine the extent of the hazard, and to decide when and where to send federal, state or local ground monitoring teams for further assessments,” according to NNSA.

The AMS mission is to provide a rapid survey of radiation and contamination following a radiological emergency. AMS accomplishes this mission by using specially equipped aircrafts to conduct the surveys. These aircrafts are equipped to detect and measure radioactive contamination on the ground. The AMS uses a sophisticated radiation detection system to gather radiological information and store it on computers, which then can be compared against earlier surveys of naturally occurring background radiation.

NNSA scientists are then able to rapidly develop maps of radiological materials deposited on the ground from a dirty bomb or nuclear bomb detonation and the potential radiation exposure to personnel in the affected areas. This information gives emergency response officials information necessary to effectively respond to the emergency.

AMA provides specialized airborne radiation detection systems to provide real-time measurements of low levels of air and ground contamination. The AMS team consists of scientists, technicians, pilots and ground support personnel. These trained experts are in charge of maintaining a state of readiness to respond to a radiological emergency at any time. The team is based out of Nellis Air Force Base in Las Vegas, Nevada, and Joint Base Andrews in Washington, DC.

NNSA’s Office of Emergency Operations today “is the government’s primary capability for radiological and nuclear emergency response and for providing security to the nation from the threat of nuclear terrorism,” NNSA says. “The Office of Emergency Operations maintains a high level of readiness for protecting and serving the US and its allies through the development, implementation and coordination of programs and systems designed to serve as a last line of defense in the event of a nuclear terrorist incident or other types of radiological accident.”

In the event of an actual emergency, say, nuclear terrorism, NNSA has a private air force with special aircraft maintained on emergency standby, as well as a fleet of ordinary-looking vehicles – everything from trucks to cars – equipped with sophisticated radiation-detection devices.

Surveillance technicians begin the hunt by measuring radiation emissions in places where a bomb or bombs are believed to be. The state-of-the-art devices they use for this are built exclusively for NNSA. From its founding as NEST, the organization has spent a substantial portion of its budget upgrading the sophistication, sensitivity and/or miniaturization of its radiation detection, communication, transport and logistics-support equipment and instrumentation.

Once an unexplainable radioactive emission is located, a plainclothes NNSA deactivation team moves in guided from a NNSA command post inside an ordinary-looking recreation vehicle, and are in constant communication with top federal counterterrorism officials via a special high-tech communications system originally set up in 1988 and called "Poison Promise.” It linked the White House, Pentagon, CIA, FBI, State Department and other appropriate departments and agencies with NEST agents carrying detectors in everyday items like attache cases and purses in order to blend in with street life as the teams sift through the emissions to pinpoint the location of the unexplained readings.

Baseline background radiation readings are also used during NNSA exercises to find mock nuclear weapons that "look, feel, smell and act like the real thing," according to this reporter’s first ever interview in 1995 with an official in charge of NNSA’s predecessor, the Nuclear Emergency Search Team, or NEST, under the Department of Energy’s Office of Emergency Response, Defense Programs.

The mock weapons contained radioactive materials sufficient to represent emissions that would be given off by an actual nuclear bomb. How quick NEST was in finding them remains classified, and, even today, depends not only upon the accuracy of NNSA’s Office of Emergency Operations’ detection teams – now called Nuclear Emergency Support Teams — and capabilities, but also the actionable intelligence it’s provided.

As in the past, today’s NEST – also known as Nuclear Counterterrorism Incident Response (NCTIR) — provides technical assistance to a lead federal agency to deal with incidents, including terrorist threats, which involve the use of nuclear materials.  NEST has been structured to address threats by domestic and foreign terrorists that may have the will and means to employ weapons of mass destruction.  NEST would assist in the identification, characterization, rendering safe and final disposition of any nuclear weapon or radioactive device.

Under NNSA, NEST serves as “an umbrella term encompassing one or more of the following four component teams:”

During the decades of NEST’s existence, it had an impressive track record in finding nuclear weapons during "training exercises." During one exercise, two 100-man NEST teams found three nuclear bombs smuggled into the country and hidden in New Orleans. But the hunt also required more than 1,000 people from NEST, the Pentagon, FBI and CIA at a cost of around $10 million. Today, NNSA “is the United States government’s primary capability for radiological and nuclear emergency response and for providing security to the nation from the threat of nuclear terrorism.

The Office of Emergency Operations maintains a high level of readiness for protecting and serving the US and its allies through the development, implementation and coordination of programs and systems designed to serve as a last line of defense in the event of a nuclear terrorist incident or other types of radiological accident. This readiness level provides the US government with quickly deployable, dedicated resources capable of responding rapidly and comprehensively to nuclear or radiological incidents worldwide.”

The Office of Emergency Operations focuses on the following key areas:

NNSA NEST teams are deployed more than 100 times a year, mainly within the US and most are radiological search deployments. The deployments are intelligence driven, support of law enforcement and planned events such as the Super Bowl, presidential inaugurations or political conventions.

During the upcoming background radiation survey of Boston, a twin-engine Bell 412 helicopter, operated by NNSA’s Remote Sensing Laboratory Aerial Measuring System from Joint Base Andrews, will be equipped with radiation sensing technology. The helicopter will fly in a grid pattern over the area at 150 feet (or higher) above the ground surface, at a speed of approximately 80 miles per hour. Flyovers will occur only during daylight hours and are estimated to take about four days to complete.

NEST was created in 1975 in the aftermath of a haphazard effort by the federal government to assemble nuclear specialists who could locate and dismantle a nuclear bomb about which the FBI had received a threat. In that case, terrorists threatened to incinerate Boston if a ransom of $200,000 wasn’t paid. The threat was a hoax, but the realization that such an attack was possible struck a deep chord of fear in the heart of government officials.

Between 1975 and 1995, NEST responded covertly in major metropolitan areas to more than 100 "false alarms.” One such hunt occurred in Las Vegas, but the device turned out to be a sophisticated conventional explosive.

“Designed to build teamwork and an in-depth understanding of the roles and responsibilities of agencies charged with responding to terrorist-related radiological, nuclear, or WMD-related incidents, these unclassified and non-attribution exercises bring together federal, state and local decision-makers and first responders,” NNSA said. “The flagship of these WMD counterterrorism tabletops is the Silent Thunder exercise series, which is a three-way partnership between the Office of CounterterrorismPolicy and Cooperation, the NNSA Office of Global Threat Reduction and the FBI’s Weapons of Mass Destruction Countermeasures Directorate.”

Each day-long Silent Thunder exercise is custom designed to the needs, objectives and circumstances of the host organization location. The exercises utilize a site-specific, fictional but challenging terrorist scenario that requires players to respond during both a crisis management phase emphasizing actions to detect, deter and prevent a terrorist WMD incident from occurring, as well as a consequence management phase emphasizing efforts to respond to, mitigate and recover from a WMD incident. Since its start in 1999, the WMD Counterterrorism Exercise Program has conducted more than 100 different preparedness and resilience exercises across the United States, training over 8,600 federal, state, and local officials.

As the NEST director told me in 1995, the problem is "staying ahead of the terrorists and the proliferation of technologies they have access to or are trying to acquire.”

“To effectively reduce nuclear threats, it is imperative to first understand the threat itself,” NNSA explained. “The Office of Nuclear Threat Science works to understand the full range of potential nuclear threat devices, from hypothetical improvised nuclear explosive devices to much more complex weapons developed by a nuclear weapon state that could be lost or stolen.”

Continuing, NNSA said, “There are significant uncertainties associated with the nuclear threat device design spectrum because it is difficult to predict the exact nature of the threat (i.e. device composition and configuration) outside of a specific case. These uncertainties directly impact our ability to assess nuclear terrorism risks and to design effective countermeasures. They also impact consequence management, forensics, and attribution efforts following a detonation. Therefore, understanding the threat affects the entire continuum of activities to counter or reduce the threat. This knowledge could mean the difference between success and failure in preventing a nuclear event.”