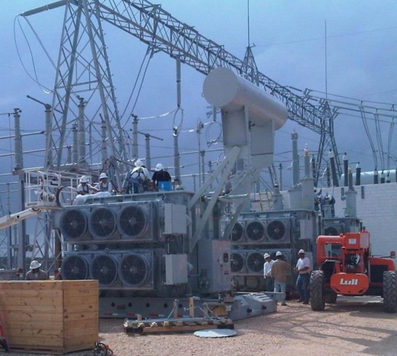 An emergency spare transformer program is a key part of the preparation for and rapid recovery from a high-impact, low-frequency (HILF) event, the Department of Homeland Security (DHS) said this week in announcing its long awaited report, Considerations for a Power Transformer Emergency Spare Strategy for the Electric Utility Industry.

Prepared for DHS by the Electric Power Research Institute (EPRI), the report stated that, “Various agencies have emphasized, and recent events have demonstrated, the critical nature of power transformers in the face of possible HILF event,” DHS stated, emphasizing that, “This report represents the culmination of six years of collaboration between DHS and EPRI on the Recovery Transformer” that’s “intended to encourage industry discussion.”

A rogue state or terrorists’ use of an electromagnetic pulse weapon, or EMP, has been of particular concern to government officials for many years as the technology to create an EMP without detonation of a nuclear bomb to create an EMP has been developed.

A Heritage Foundation report said, "An EMP attack has the potential to decimate America’s electrical and technological infrastructure, effectively sending the US back to the 19th Century. As society grows more reliant on electronic devices, so its vulnerability to an EMP attack."

But an unprecedented coronal mass ejection (CME) from the sun could be just as damaging as an EMP attack. A CME is a massive burst of gas and magnetic field arising from the solar corona and being released into the solar wind.

The US Commission to Assess the Threat to the United States from Electromagnetic Pulse Attack — established by Congress — has produced multiple reports and briefings including an Executive Report and a Critical National Infrastructures Report.

For over a decade, Homeland Security Today reported last week, national security and energy experts have warned America’s power grid has grown increasingly vulnerable to natural and subversive action. With power outages 285 percent more likely to occur today than in 1984, it is critical that the nation ensure its electric power system is reliable, according to a recent study by Johns Hopkins University (JHU).

Published in the Journal, Risk Analysis, the study, Who’s Making Sure the Power Stays On? said the nation’s electric power distribution systems are so haphazardly regulated for reliability that it’s nearly impossible for customers to know their true risk of losing service in a major storm. The study, which was designed to analyze how reliability is measured, led the researchers to propose new regulatory measures to accurately identify weaknesses within the system.

Because of the growing risks to the nation’s electric grid, DHS’s Science and Technology Directorate (S&T) finally completed its Recovery Transformer (RecX) program, and published a final report that contains lessons learned, evaluations and considerations for a spare transformer strategy to support our nation’s electric grid in the event of an EMP attack, CME or some other natural or manmade disaster that severely disrupts the nation’s power grid.

According to DHS S&T, “RecX is a mobile spare extra high voltage (EHV) transformer designed to be rapidly deployed in the event of a transformer failure. Development of the prototype RecX was completed in 2011by the manufacturer ABB and the Electric Power Research Institute. The RecX was successfully field tested in CenterPoint Energy’s grid in March 2012. The field test demonstrated RecX’s rapid deployment speed by reducing the time needed to transport, install and energize from the typical 8-12 weeks to less than six days.

The DHS/EPRI Recovery Transformer is an example of one key component to a successful emergency spares program.

“This landmark program has resulted in the successful design, manufacture, factory testing, transportation, installation, energization and field testing of the world’s first set of rapid deployment high-powered 345-kV emergency spare transformers,” the report stated, noting that, “This program was conducted at a single US utility. However, recovery from HILF events calls for broader implementation of prudent measures related to emergency spare transformers. The first needed step is an assessment of recommended practices and guidance for all utilities when implementing enhanced emergency spare transformer programs.”

DHS S&T stated that, “In April 2015, the Department of Energy (DOE) released their Quadrennial Energy Review (QER), which highlights the significant risks associated with EHV transformers. The QER recommends that ‘DOE should lead—in coordination with DHS and other federal agencies, states and industry—an initiative to mitigate the risks associated with the loss of transformers,’ including ‘development of one or more transformer reserves through a staged process.’ Part of this development process requires assessing ‘technical specifications for reserve transformers’ and how reserve transformers should be stored and deployed.”

DHS S&T’s work through the RecX program specifically addresses these issues. The RecX final report is “an assessment of recommended practices and guidance …when implementing enhanced emergency spare transformer programs,” and discusses functional specifications for recovery transformers, evaluation of existing spare transformer strategies, and considerations for developing new ones.

The 52-page report concluded and recommended that, “Over the long-term, as new transformers are designed and manufactured to replace the aging population now in service, there is an opportunity to plot a parallel beneficial path forward. If the new ‘conventional transformers that   are installed can be designed for more broad applicability across substations in a utility service territory, they can better ameliorate HILF threats along with serving their current purpose (e.g., replacement of transformers that fail in normal service).”

“Extending this vision of a future conventional design beyond broader applicability to also include rapid construction, transportation, and installation requires an analysis to determine the relative costs and benefits of such an approach,” report stated.

The report said that, “To begin the path towards realizing this long-term strategy, the industry” recommended the following: