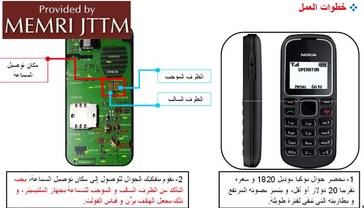 The officials acknowledged that this represents a "serious new threat."

The main suspect in the New York bombings, Ahmad Khan Rahami, was arrested September 19 following a shootout with police in Linden, NJ. Rahami reputedly was identified through a fingerprint and other clues from the cell phone and pressure cooker device found at the 27th Street location in Manhattan.

"The recent pressure cooker bomb tutorial … posted on the Cyber Kahilafah Telegram channel with links to the group’s Dark Web website" using modified cell phones and Bluetooth devices to remotely denote the bombs is a new methodology for detonating this type of improvised explosive device (IED), MEMRI said, noting, "The content [of the tutorial] included an image of the booby-trapped pressure cooker found in Manhattan," and that, "One of the videos featured surveillance footage that captured the explosion in Chelsea, NY."

[Editor’s note: For more on the Dark Web, see the Homeland Security Today article, The Dark Web: The Place Where Digital Evil Lurks]

"Since AQAP’s Inspire Magazine released its infamous article, How To Make A Bomb In Your Mom’s Kitchen – Al Qaeda, and now ISIS and other jihadi groups, have been fixated on lone wolf attackers making their own homemade bombs and using them inside the West," MEMRI Executive Director Steve Stalinsky told Homeland Security Today. "Examples of this can be found daily on their social media accounts such as the German-based Telegram app which continues to grow in popularity among this group. Just today a jihadi hacker’s telegram channel announced that soon it will explain how to install WI-FI in cars to use it for explosions."

According to MEMRI, "On September 26, the pro-ISIS hacking group Cyber Kahilafah announced on its Telegram channel that it will soon publish instructions on how to modify a vehicle for remote operation using Wi-Fi. The group states that such remotely-operated vehicles could be used to spread poisons, gather intelligence, or detonated remotely. The announcement read as follows:"

"In the near future we intend to launch a project that will include instructions on how to modify vehicles for remote operation using a Wi-Fi network and use them for various missions such as gathering intelligence or booby-trapping and detonating them remotely. Additionally, the vehicles could be used to spread poisons while maintaining a safe distance between the target and the mujahid brother. The wireless hardware in the vehicle could also be fitted with equipment to disrupt enemy communications. While in this case we would lose contact with the vehicle, but we will still attain our goal – disrupting enemy communications. The project is still in its infancy, but we will present it once it is finalized."

Although ISIS has not claimed any connection to the New York attacks, the original pressure cooker bomb tutorial was published in a 2010 issue of Inspire, the English-language online magazine published by Al Qaeda in the Arabian Peninsula (AQAP).

The article provided detailed instructions on how to make a pressure cooker bomb, and encouraging "lone wolf" attacks against the United States and its allies.

That same month, the Department of Homeland Security (DHS) issued an "information bulletin" to warn authorities of the dangers of pressure cookers bombs.

By 2004, US counterterrorism officials were so concerned about the potential threat these sorts of IED attacks DHS issued the bulletin, Potential Terrorist Use of Pressure Cookers. The three-page bulletin warned Al Qaeda training camps were teaching jihadists how to build pressure cookers into IEDs "using simple electronic components including, but not limited to, digital watches, garage door openers, cell phones or pagers."

DHS stated it issued the "bulletin to alert frontline border inspectors and agents, state and local officers and other first responders that there is continued interest by terrorist organizations to use innocuous items to package IEDs. A technique commonly taught in Afghan terrorist training camps is the use/conversion of pressure cookers into IEDs."

One of the deadliest pressure cooker bomb attacks was a series of train bombings in Mumbai, India in July 2006 by Lashkar-e-Taiba, an Al Qaeda-affiliated jihadi group. The blast killed more than 200 people and injured 700.

DHS noted that, "In September 2003, India’s security forces in Jammu foiled a major terrorist attack during the Navratra celebrations by seizing 40 kg of an explosive, RDX, which was put in two large pressure cookers, and that, "In March 2003, four Algerians, three of whom admitted training in Afghan terror camps, were convicted of plotting to bomb a French Christmas market using pressure cookers packed with explosives."

In February 2002, two pressure cooker bombs were deployed in an attack on Lukla Airport near Mount Everest.

At Christmas 2000, French police thwarted an Al Qaeda attack in Strasbourg using a pressure cooker, after which their popularity soared, especially in jihadi attacks in Afghanistan, Pakistan and India.

In February 2001, Maoist Rebels also used two pressure cooker bombs in an attack on a convoy containing judicial officials in which four escort policemen were killed.

More recently, in July 2011, Army Private Naser Jason Abdo stationed at Fort Hood, Texas, was arrested for planning to bomb a restaurant popular with soldiers. Authorities found pressure cookers and bomb-making materials in his hotel room, along with evidence that he’d used the Al Qaeda tutorial.

Boston Marathon bomber, Dzhokhar Tsarnaev, testified at his 2015 trial that he and his brother learned to make the two pressure cooker bombs they exploded at the marathon from the bomb-making blueprint published by Inspire.