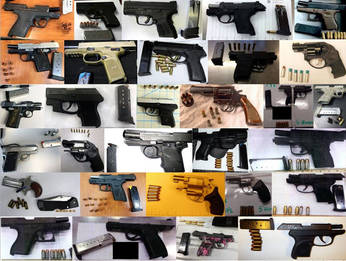 A record-breaking 78 firearms were found this week in carry-on bags at airports around the nation, 68 of which were loaded and 21 had a round chambered, according to the Transportation Security Administration (TSA).

That represents a nearly 20 percent increase over the 2,212 firearms discovered in 2014 in carry-on bags at checkpoints across the country, averaging more than six firearms per day. Of those, 1,835 (83 percent) were loaded. Firearms were intercepted at a total of 224 airports; 19 more airports than during 2013.

As in previous years, the majority of handguns found in carry-on bags were loaded and many had a bullet chambered.

The continued escalation of TSA hand gun seizures comes at a time when the threat of homegrown Islamist jihadists also is continuing to grow.

In the December 2015 cover story, Destination Airport, and Guess What’s on the Menu?, published in Al Qaeda in the Arabian Peninsula’s (AQAP) Inspire magazine detailed how to bomb passenger planes. Releasing the digital magazine on Christmas Eve was unlikely a coincidence; it was the 5th anniversary of Umar Farouk Abdulmutallab’s Christmas Day 2009 bombing attempt on Northwest Airlines Flight 253 as it was on its landing approach to Detroit Metropolitan Wayne County Airport.

The entire issue was devoted to inspiring lone wolf jihadists in the US and the West, and especially urged attacks on commercial passenger planes. A lengthy section provided detailed instructions on how to build a new bomb AQAP purported can be “hidden” not only on an aircraft, but also to blow up other targets with the intent of causing ripples throughout US and Western economies.

The successively record-breaking number of passengers trying to slip by TSA screeners with a handgun – not an insignificant number of handguns were what TSA says were “artfully concealed,” raises the disturbing question: were these individuals deliberately trying to sneak the guns past screeners?

While TSA attributes the vast majority of the handguns its screeners continue to confiscate to forgetfulness on the part of passengers who simply forgot they’d put a weapon in their luggage before attempting to board a plane, in those instances in which the owners of sidearms clearly tried to conceal their guns from security screeners — many loaded and chambered – nevertheless begs the question about the persons’ intent… and motivation.

As Homeland Security Today previously reported, security authorities are clearly disturbed by the fact that more than a decade after 9/11 so many people are deliberately trying to take a concealed firearm — including handguns that are loaded or chambered — onboard a passenger plane.

The authorities added there’s no logical reason why someone would “artfully conceal” a handgun (or some other dangerous weapon like a knife or incendiary) unless it’s a premeditated effort to try to smuggle them past TSA screeners. They noted there’s been sufficient efforts to make the flying public aware that concealed weapons — especially guns — are strictly prohibited. It’s not a secret what people are prohibited from carrying onboard a passenger plane.

“I find it very hard to believe these are people who just simply forgot they were carrying a handgun … or a handgun that was loaded and chambered,” a government counterterrorism official previously told Homeland Security Today on background. “In these cases,” the official said, “I just don’t buy that these people just forgot … there was something else going on.”

“This is completely unacceptable, I don’t care what excuses … people have — as for me, the ban on guns on planes has long been known, passengers should know this – more so [15] years after 9/11. In other words, there’s just no rational excuse whatsoever. Passengers saying, ‘well, I just forgot,’ just doesn’t cut it when we’re dealing with the level of escalation in [the] numbers of guns we’re now finding in carry-ons … especially with way too many that have a bullet chambered and ready to fire,” a veteran TSA officer said on background at a large metropolitan domestic airport.