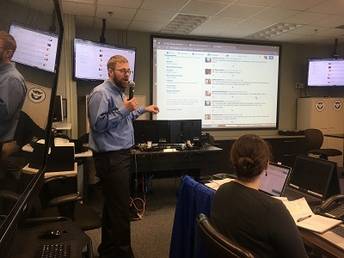 During the August 8-14, 2016 flooding in Louisiana, 6.9 trillion gallons of rain water flooded Baton Rouge, damaging some 60,000 homes. Streets filled with over a foot and a half of standing flood water, making roads impassable and stranding residents without basic necessities. The flood also interrupted communication lines, compromising emergency responders’ situational awareness.

The American Red Cross Vice President of Disaster Services, Operations, and Logistics described the natural disaster as “the worst to hit the United States since Superstorm Sandy.”

In response to improve reactions to similar floods in the future, the New Orleans Office of Homeland Security and Emergency Preparedness, Greater New Orleans, Inc., and the Department of Homeland Security (DHS) Science and Technology Directorate (S&T) staged a mutual aid experiment in January to demonstrate new information-sharing technology.

The experiment, part of S&T’s Flood Apex Program, sought to determine how to best use local resources, non-traditional sources of information (like social media) and business status updates when coordinating multi-jurisdictional response.

The experiment has helped form a replicable set of best practices for floods or other disasters. Together, pre-scripted mutual aid planning and the use of non-traditional information (i.e., social media and private sector information) have the potential to strengthen disaster response capabilities in the City of New Orleans and across the US.

Stakeholders from federal, state and local governments participated in the experiment, along with non-profits and the private sector participants. This cross-section provided researchers with a perspective of an entire community.

Meanwhile, Harris County, Texas Commissioners Courtdeclared April 2-8, 2017, Flood Safety Awareness Week. The Harris County Office of Homeland Security & Emergency Management and the National Weather Service (NWS) urge residents to learn about flood dangers and how to stay safe during flood emergencies, especially given the spring and summer months bring a greater potential for thunderstorms that can trigger flooding. In 2016, the Harris County Emergency Operations Center was activated 10 times, eight of those for severe weather.

“At the First Responders Group (FRG) flood experiment, an operations officer led the group through scenarios. In cases like the 2016 Baton Rouge flood, response agencies need assistance from surrounding communities and citizens—whether it is manpower, technology, status reports or basic relief supplies,” S&T said. “However, jurisdictions often have different communications systems, which can make it difficult to request help. This means that when a city is paralyzed by water, emergency responders have a difficult time maintaining situational awareness and gathering necessary resources.”

“Using S&T’s Mutual Aid Resource Planner (MARP), responders dealt with a simulated flood by formulating a capability-based plan,” S&T said, noting, “The MARP platform bridges the gap between planners and responders, which can help save lives by quickly getting help to where people need it. MARP accomplishes this by automating various application processes to request help from neighboring communities.”

“The MARP streamlines cross-community collaboration by building a game plan that takes neighboring resource capabilities into account,” S&T said. “The plan is designed to overcome challenges, track the resources necessary to accomplish goals and generate a summary of strengths and weaknesses. This will allow a flooded community to work with their neighbors to fill any gaps in equipment, manpower or any other resource shortfall, and communicate mutual aid resource assumptions."

Available to members of the National Information Sharing Consortium, MARP is a template that communities or emergency management agencies can use to allocate resources during an incident. The MARP is intended to help develop plans that are as accurate as possible so response can be more efficient.

A Digital Volunteer Team, comprised of community stakeholders from local business and organizations, tested the “citizens as a sensor” concept, targeting key tasks including controlling rumors and reporting road or utility issues.

S&T said, “Using citizens helps emergency responders gain better situational awareness, as the citizens act as the eyes and ears of the community.”