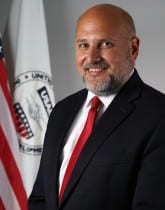 President Trump named John Barsa, former leader of the DHS Office of Partnership and Engagement (OPE) as Acting Assistant Secretary and later Principal Deputy Assistant Secretary, to be the Acting Administrator of the United States Agency for International Development.

Barsa currently serves as the Assistant Administrator for the United States Agency for International Development’s Bureau for Latin America and the Caribbean, working to support democracy related programs in Venezuela, Nicaragua, and Cuba.

In addition to Barsa’s DHS experience, he served in the United States Army Reserves for nearly a decade, as a member of the 11th Special Forces Group and the 450th Civil Affairs Battalion. Barsa also worked for United States Representative Lincoln Diaz-Balart of Florida and also served in external engagement roles within the National Aeronautics and Space Administration and the Department of Homeland Security.

He is a graduate of Florida International University.