The front side of the medal depicts the U.S. Coast Guard Cutter Hamilton at full speed ahead. “Semper Paratus” is etched around the coin. 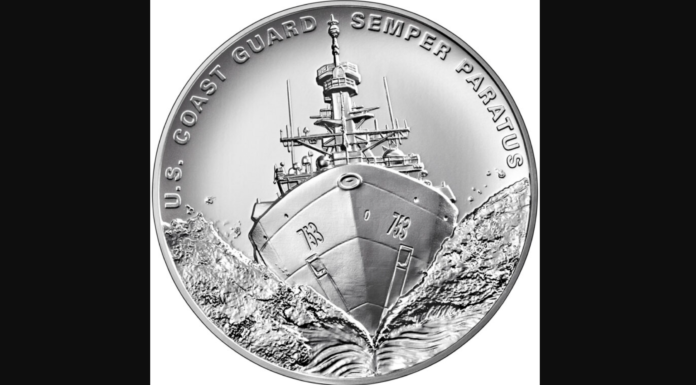 The U.S. Coast Guard has been honored with a commemorative silver medal from the U.S. Mint, released Aug. 17, 2021. This is a limited release by the Bureau of the Mint, with only 10,000 medals made.

This project began in April 2018 and took six months. It has come to fruition through a collaborative effort between the Bureau, the Citizens Coinage Advisory Committee (made up of artists from around the country), and the Coast Guard Advisory Team, which was led by Scott Price, chief historian of the Coast Guard.

“History matters! I was thrilled to be asked to take part in the design process and appreciated the Bureau’s recognition of how important history is to our service. I enjoyed collaborating with them on our World War I Commemorative Medal and once again on their newest design,” Price said.

The front side of the medal depicts the U.S. Coast Guard Cutter Hamilton at full speed ahead. “Semper Paratus” is etched around the coin. On the back are a life preserver and the racing stripe mark—almost universally found on all Coast Guard crafts. The Coast Guard emblem appears, as do inscriptions of the Coast Guard’s core values—honor, respect, and devotion to duty. Each medal weighs two and a half ounces.

“From our founding in 1790 through the present, the Coast Guard has stood the watch to protect American shores, waters, and citizens,” said Rear Adm. Megan Dean. “This medal looks solidly forward with a modern National Security Cutter at sea, but also harkens back to our rich history as the oldest continuous sea service. We appreciate the U.S. Mint’s initiative to highlight the women and men who serve our nation in the U.S. Armed Forces.”

If you would like to obtain the latest medal, you can do so here. There is the option of including a personal message, as well.