University of Nevada Team Go to Himalayas for Earthquake Research 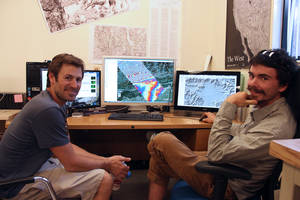 To help seismologists better understand faults in California and elsewhere, Steve Wesnousky, a geologist and professor at the University of Nevada, Reno, and two of his graduate students, Ian Pierce and Steve Angster, met up last week to conduct studies of the massive 9-point earthquake disaster in Nepal on April 25. They hope to gather data to better understand the seismic hazard along one of the longest earthquake faults that affects one of the most populous areas of the Earth.

Wesnousky has been studying the Himalayan Frontal Thrust Fault since 1999. On sabbatical to further his National Science Foundation research on the hundreds-of-miles-long fault, he was in India about three months ago studying the Earth’s movement in the Himalayan foothills.

Director of the university’s Center for Neotectonic Studies, Wesnousky arrived in Kathmandu on Sunday to meet up with his students.

“This is a rather unique window to understand what the surface rupture from a magnitude 7.8 thrust might look like ‘fresh,’ so one can then attempt to understand how that’s expressed in a trench looking at paleoearthquakes,” said Graham Kent, geoscientist and director of the Nevada Seismological Laboratory. “This is also a perfect opportunity to gauge the deformation associated with large thrust faults in the greater Los Angeles basin that are thought to peg out around magnitude 7.8 to 8.1.”

“No one knows for sure if there is a ground rupture yet, that’s what they’ll be looking for,” Kent said. “For there to be no ground rupture in a magnitude 7.8 is significant for how we characterize these faults and the associated hazards.”

There has been intensive study in the past week of the area using geodesy and InSAR, a type of radar, to measure deformation and uplift of the plates. No surface ruptures have yet been found.

“Geophysics, InSAR, is pretty clear there are no clear discontinuities,” Wesnousky said. “That doesn’t say there cannot be surprises, so we look.”

The world’s highest mountain chain is the result of collision of the Indian Plate into the Eurasian Plate, causing uplift of the Himalaya mountains as the result of repeated earthquakes along the southern front of the mountain range, which extends across both India and Nepal.

Wesnousky and colleagues have conducted paleoseismic studies to define both the timing and magnitude of prehistoric earthquakes along the Himalayan Frontal Thrust Fault. Wesnousky has six peer-reviewed scientific papers about the Himalayan fault. The observations are working to define the seismic hazard of the region as well as the mechanics of fault rupture along major thrust faults.

“This is a massive subduction zone that had a large earthquake in the 1930s,” Kent said. “Just to the west of Kathmandu is a seismic gap, where there hasn’t been a large earthquake since 1505. There have been some large quakes close by in Pakistan, where 100,000 people were killed in a magnitude 7.7 in 2001.”

The team will head back to Wesnousky’s research site in the foothills of the Himalaya as well as search in other areas for ground ruptures that may help scientists calibrate results from earlier studies and quantify the potential for additional earthquakes in the magnitude 8 or 9 range. From the Seismological Laboratory on the University’s campus, Kent is coordinating the expedition to aid in the research.

“With a tragedy like this, it’s tough to keep your science hat on, but we’ll be concentrating on finding information that will help in the next months and years in quantifying what this fault could be capable of,” Kent said. “We have some good guesses, but this is a rare enough event, with enough potential to actually get to see any ground ruptures, that we want to use the NSF research project to study it now. It’s important work that will help us understand these gigantic fault zones and the earthquakes that propagate from them.”

“With the devastation in the cities and villages, there may be little infrastructure, so where we might have ideally used helicopters to search for ground ruptures, we will be driving and hiking,” said Pierce, who studies with Wesnousky in the University’s Center for Neotectonics Studies, said. “Helicopters have a more important mission of disaster response.”

Photo: University of Nevada, Reno doctoral students Ian Pierce, right, and Steve Angster prepare for a research expedition to the Himalaya mountains to study the Himalayan Frontal Thrust Fault south of Kathmandu. They are graduate students of College of Science Professor Steve Wesnousky, who has been studying earthquakes and seismicity in that region since 1999 as director of the University’s Center for Neotectonic Studies. Photo by Mike Wolterbeek, University of Nevada, Reno.