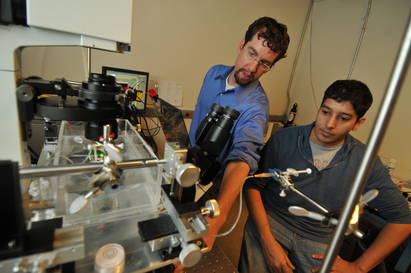 A contract valued at $1.3 million to advance the new medical treatment process using microbubble oxygenation, an emerging technology to provide oxygen to patients whose lungs cannot function efficiently due to trauma was awarded by the Office of the Air Force Surgeon General to the National Strategic Research Institute (NSRI) at the University of Nebraska.

A University Affiliated Research Center (UARC), NSRI is one of 13 established UARCs across the nation, delivering relevant and timely research solutions directly impacting the US Department of Defense operations and nationalsecurity, and is the only UARC dedicated to delivering solutions for combating weapons of mass destruction (WMD) to the US Strategic Command and across other federal agencies, including the Department of Homeland Security for development of medical countermeasures to WMD; nuclear detection and forensics; consequence management; chemical and biological weapons detection; and space, cyber and telecom law.

The Air Force’s support “will move the research forward in three significant directions across three labs at three universities in two states,” an announcement from the university, saying. “Dr. Mark Borden, associate professor of mechanical engineering at the University of Colorado Boulder and inventor of the oxygen microbubbles, will create a process and system capable of large scale manufacturing. Dr. Benjamin Terry, assistant professor of mechanical and materials engineering at the University of Nebraska-Lincoln (UNL) will design and develop a medical device that delivers the oxygen microbubbles to patients and Dr. Keely Buesing, assistant professor of surgery at the University of Nebraska Medical Center (UNMC) will develop injury models for testing the new technique.”

Terry and Borden invented the new way of administering oxygen to patients who cannot breathe.

“Our system transforms the abdomen into a third lung, so to speak,” Terry said. “Through a method of pumping and delivering oxygen microbubbles into the abdomen while removing dangerous carbon dioxide, the process delivers life-sustaining oxygen to the body’s core which is then circulated to the brain and other vital organs.”

Borden said the team is taking a “biomimetic” approach – learning as much they can from nature on how to solve the engineering problem of delivering vital oxygen to the body’s tissues.

The two explained that microbubbles are tiny bubbles, each one only a fraction of the size of a human hair, that are designed to mimic the alveoli in the human lung by releasing oxygen to the body and simultaneously removing carbon dioxide.

“Each cubic centimeter of microbubble foam contains trillions of individual microbubbles, providing an enormous surface area for the gas exchange process to take place.  Once the oxygen has been delivered, the spent microbubbles can be safely removed from the peritoneal cavity. So we do not anticipate any long-term toxicity,” Borden said.

Buesing said, “major combat-related trauma produces severe injuries, some of which affect the lungs resulting in life-threatening or fatal lack of oxygen to the body. In some cases, the lungs are so damaged that ventilation is inadequate and injured warfighters must be transported, sometimes long distances, to advanced hospital facilities. In these facilities, the injured can receive treatment to keep them alive while the lungs heal. Unfortunately, during transport, there are few options for treating severe lung failure.”

“The current en-route care system of transporting patients has high survival rates, but unique scenarios could severely stress the system in the event of mass casualties from a weapons of mass destruction event,” Terry explained, noting that, “In the event of WMD attack, there is a high probability that the current transportation system would be overwhelmed and significantly tasked.”

The Office of the Air Force Surgeon General hopes to further technology and procedures to evolve current en-route care into a system fully capable of increasing the survival rate of injured patients, so they can reach the most capable treatment, recovery and rehabilitation facilities.

As part of the project the CU Boulder team will work on scaling up the manufacturing processes to rapidly generate oxygen microbubbles in large quantities for long-term storage and ready transport to the site of need.

“This is a unique engineering challenge,” Borden said. “The goal is to bring a technology from the benchtop scale to mass production.”

“Through this effort, the NSRI is playing a key role in connecting these research opportunities between the researchers at the University of Nebraska Medical Center, University of Nebraska-Lincoln and University of Colorado Boulder with the Office of the Air Force Surgeon General and other DoD agencies. As a result of the NSRI contract, en-route care technology and procedures are being advanced to enhance the survival of our injured military personnel,” said NSRI Executive Director, retired Air Force Lt. Gen. Robert Hinson.

Photo: Dr. Mark Borden, left, associate professor of mechanical engineering at the University of Colorado Boulder, is creating a process and system capable of large scale manufacturing of oxygen microbubbles, a new medical treatment he invented to advance the new medical treatment designed to provide oxygen to patients whose lungs cannot function efficiently due to trauma. (UCB photo by Casey Cass)