GAO Tells DOE to Clean Up its Act Regarding Nuclear Waste 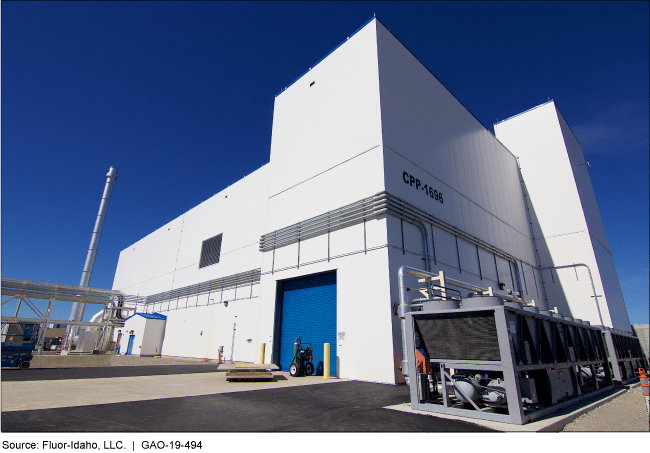 Decades of nuclear energy research at the Department of Energy’s (DOE) Idaho National Laboratory produced two forms of high-level radioactive waste: liquid sodium-bearing waste and granular calcine waste. DOE is required to treat all 2 million gallons of this waste and prepare it for removal from Idaho by 2035.

A Government Accountability Office (GAO) report published September 9 details how DOE finished an on-site treatment facility for one form of this waste in 2012, but initial testing revealed problems and a need for more work. GAO found DOE could improve how it manages the work and may also need to retrofit the facility to treat the other form of waste.

GAO’s review determined that DOE’s Office of Environmental Management (EM) has not fully followed selected project management best practices in managing the reengineering of the Integrated Waste Treatment Unit (IWTU), to treat 900,000 gallons of liquid sodium-bearing waste (SBW) that must be solidified for disposal.

Further, EM’s cost and schedule estimates for IWTU reengineering did not fully meet selected best practices for cost and schedule estimates. For example, EM did not follow best practices for a comprehensive cost estimate because it failed to include both government and contractor costs over the entire project. As of February 2019, EM has experienced approximately $64 million in added costs and a more than 1-year delay in IWTU reengineering. GAO predicts EM is at risk of future cost overruns and delays in meeting its target disposal milestones unless it follows best practices.

Based on GAO’s review of EM documents, the office faces challenges with its plans for SBW disposal at its preferred disposal site, the Waste Isolation Pilot Plant (WIPP), an underground repository for waste contaminated by nuclear elements, near Carlsbad, New Mexico. These challenges include a statutory prohibition on the disposal of high-level waste at WIPP. EM does not have a strategy or timeline to address these challenges or to identify an alternative disposal pathway.

In addition, EM faces challenges implementing its selected technology to further treat 1.2 million gallons of granular calcine waste and selecting a potential waste disposal pathway. For example, DOE has identified challenges with retrofitting the IWTU for calcine waste treatment. As a result, EM is deferring further development of its plans to treat the calcine waste. EM officials said that the agency is making progress toward calcine waste disposal by testing options for removing the waste from its storage bins, a precursor to treating or packaging the waste for disposal. However, EM does not have a strategy or timeline for determining its next steps for the treatment and disposal of calcine waste.

GAO is making five recommendations to DOE to ensure that EM meets the milestone for completing the treatment of the waste by December 31, 2035:

DOE agreed with the recommendations related to the management of the IWTU reengineering project, including developing cost and schedule estimates that meet best practices and ensuring the reliability of the EVM system for the project. Regarding the cost estimate, DOE committed to developing cost estimates that meet best practices and stated that cost estimates for phases three and four of the IWTU reengineering project have been developed and reviewed by the Defense Contract Audit Agency. For the schedule estimate, DOE stated that the schedules for phases three and four have been developed and that the inclusion of these phases in the schedule is in accordance with best practices for the well-constructed characteristic.

With regard to the EVM system, DOE stated that cost and performance data will be included in the EVM system in accordance with EVM best practices once contract negotiations are completed, which the agency estimated would conclude by December 31, 2019.

DOE also agreed with the GAO recommendation to develop a strategy, including a timeline, for the disposal of the SBW and calcine waste. DOE further stated that EM is in the process of developing a site options analysis to identify opportunities to complete cleanup work through more efficient and innovative approaches over the next decade. This analysis is expected to be completed in fiscal year 2020, according to DOE.