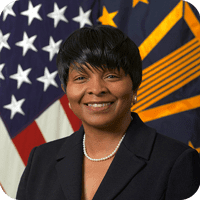 Ms. Lytwaive Hutchinson, who will serve as the Chief Information Officer, Mission Support. Ms. Hutchinson previously served as the Acting Director, Joint Service Provider (JSP), Defense Information Systems Agency. In this capacity she oversaw an annual IT budget of over $500M, managed enterprise-wide IT programs and initiatives, and was the executive authority on utilization of IT capabilities, resources, and systems.  She began her career in federal service in June 2002 and was appointed into the Senior Executive Service on December 2010.  Beyond her career with the federal government, Ms. Hutchison proudly served her country for 21 years on active duty with the United States Army.  Ms. Hutchinson holds a Master of Science in Quality Systems Management and a Bachelor of Science in Computer Science.  She is also a graduate of the Federal Executive Institute, Harvard Business School for Executive Education, APEX, Vanguard, and Leadership at the Peak.