“Susan and Peggy remind us that the word ‘bipartisan’ in our Commission’s name is not just an afterthought,” said Ridge. 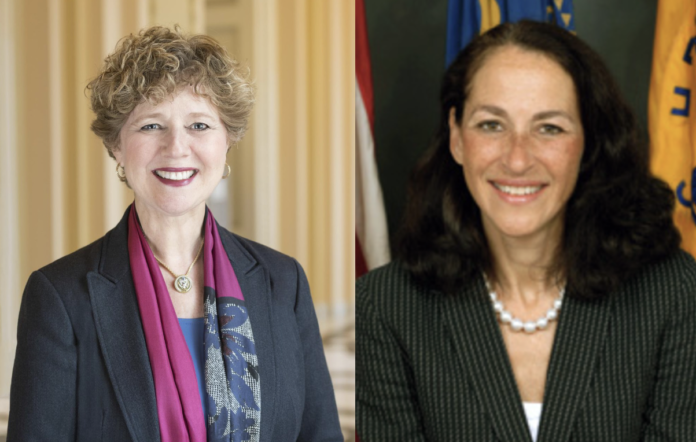 “We are very pleased to welcome Congresswoman Brooks and Commissioner Hamburg, whose wealth of expertise will enhance the work of this Commission,” said former Senator Joe Lieberman, Commission Co-Chair. “During her time in Congress, Susan Brooks ensured that many of our recommendations from our original National Blueprint for Biodefense were included in the Pandemic All-Hazards Preparedness and Advancing Innovation Act. Peggy Hamburg has also spent considerable time addressing biological threats, during her time as FDA Commissioner and previously as the Assistant Secretary for Planning and Evaluation, when she served under one of our founding Commissioners, former Secretary of Health and Human Services Donna Shalala. We look forward to their contributions to our important work.”

Congresswoman Brooks was named the inaugural Congressional Biosecurity Champion by the Alliance for Biosecurity for her work on improving the Nation’s readiness for biological threats like Ebola and anthrax. Before joining the U.S. House of Representatives, Ms. Brooks served as Senior Vice President and General Counsel for Ivy Tech Community College from 2007-2012 where she focused on workforce development strategies aimed at enhancing job training and placement for thousands of Hoosier residents. In 2001, President George W. Bush appointed Brooks as U.S. Attorney for the Southern District of Indiana. She received bipartisan acclaim for efforts to battle mortgage fraud, gun violence, drug trafficking, gang activity, child exploitation, and identity theft.

Margaret (Peggy) Hamburg, MD, recently retired as Foreign Secretary for the National Academy of Medicine and finished terms as President and Board Chair of the American Association for the Advancement of Science. She is an internationally recognized leader in public health, medicine, and science. At the FDA, Commissioner Hamburg was known for advancing regulatory science, modernizing regulatory pathways, and globalizing the agency. Before this, she was founding Vice President for Biological Programs at the Nuclear Threat Initiative, a foundation dedicated to reducing nuclear, chemical, and biological threats. Other past positions include Commissioner of Health for New York City, and Assistant Director of the National Institute of Allergy and Infectious Diseases.

“Susan and Peggy remind us that the word ‘bipartisan’ in our Commission’s name is not just an afterthought,” said former Secretary of Homeland Security, Governor Tom Ridge. “The bipartisan work that goes into developing our recommendations serves an important purpose. It underscores that preparing for a biological incident is not a Republican or a Democrat issue – it is a matter of national security that should concern all Americans regardless of party affiliation. Susan and Peggy each have long and distinguished track records of working across party lines to help make our country a safer place. We are thrilled to have them on board.”