Each year, Homeland Security Today honors shining stars in the community who are making their own unique, invaluable contributions to advance the mission of keeping America safer from myriad threats. Learn more about this year’s awardees ahead of the Dec. 11 awards ceremony in Washington.

Homeland Security Person of the Year

A day before his planned departure from the Department of Homeland Security, then-Acting Secretary Kevin McAleenan was characteristically putting mission first: testifying on global threats before the House Homeland Security Committee. Praised as “a consummate professional” by the committee chairman, McAleenan vowed that he would stay on at the department as long as was needed to “ensure a smooth transition” in a commitment to the mission – and the men and women of the department – that transcends politics.

With a spirit of service fueled by the 9/11 attacks, McAleenan’s path through the FBI led him to U.S. Customs and Border Protection, where he directed border security operations at Los Angeles International Airport. He would lead CBP’s Office of Field Operations before moving up to deputy commissioner and later commissioner of CBP. McAleenan stepped forward to lead DHS in an acting capacity in April 2019, guiding the department through tumultuous political currents with a steadfast focus on the mission of the protecting the homeland and supporting the work of federal employees and private-sector innovators.

“At all times, he has acted with integrity and worked hard to fulfill the entire set of missions of DHS,” said Jim Williams of Schambach and Williams Consulting in his nomination. “He has been a proud spokesperson for the DHS workforce and has been a strong voice for executing that mission within all legal boundaries and with compassion to all. He has earned the respect of our allies and other senior leaders across government at all levels.” 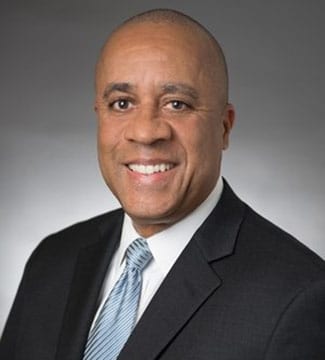 The City of Angels faces threats from temblors to terrorists, and James Featherstone has relentlessly worked for more than three decades to ensure Los Angeles is ready and resilient. A Washington, D.C., native, Featherstone adopted L.A. in his nearly 20-year career at the Los Angeles Fire Department, during which he was appointed general manager of the Los Angeles City Emergency Management Department in 2007 and served as interim fire chief in 2013-14. He was appointed president and CEO of the Los Angeles Homeland Security Advisory Council in 2016, charged with uniting the public and private sectors behind the mission of transforming the preparedness picture of the nation’s second-largest city.

“He has been instrumental in leading the charge to catalyze and support a multi-jurisdictional and comprehensive approach to preparedness, security, and resiliency in the Los Angeles region by providing innovative technology and opportunities for engagement, capacity-building, and partnerships for the public, private, and civic sectors across the region,” said the Los Angeles Police Department in its nomination. “Under Jim Featherstone’s leadership, HSAC totally pivoted its focus to better serve the evolving needs of local crisis managers. Under his leadership, with his expert guidance and his deep relationships, and under the incredible influence of his reputation, in a few short years HSAC has emerged as a major contributing force throughout the Los Angeles region.”

Featherstone is a senior fellow at the Harvard University Kennedy School of Government’s Program on Crisis Leadership, and previously served a four-year tenure as an adjunct instructor at the National Emergency Response and Recovery Training Center at Texas A&M University. He also served as chairman of the Los Angeles/Long Beach Urban Area Security Initiative Approval Authority from 2007 to 2016.

“Jim is a humble and relentless leader who has continued to develop relationships with the various public and private sectors,” the LAPD continued. “He ardently supports a proactive approach to protecting the homeland, while fending off threats to our nation. He is an unsung hero who works diligently behind the scenes without the need for fanfare or recognition. He is a proven and recognized leader.”