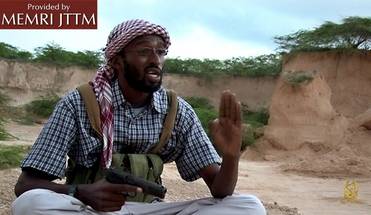 On the heels of what is believed to have been an Al Qaeda involved attack on the Paris offices of the satirical magazine Charlie Hebdo, the Somalia-based Al Qaeda affiliate Al Shabaab Al Mujahideen on Thursday released a 44-minute video documenting its operations against the country’s judicial and legislative systems in  2013 and 2014.

Western counterterrorism intelligence officials expressed concern in background interviews Friday that there’s every possibility that the timing of the release of the video, and its content, could be a coordinated signal for other plots already in the works by the Al Qaeda organization.

According to the Middle East Media Research Institute (MEMRI), which monitors jihadist social media, “The video features two Western Al Shabaab fighters: a Canadian-Somali fighter named Farhan (Mahd Ali Duri), who participated in the attack against Somalia’s main court complex in 2013, and an American-Somali fighter named Ibrahim ‘Abd Al Rahman Muhammad, who led the May 2014 attack against Somalia’s parliament in the capital of Mogadishu.”

“For example,” MEMRI reported, “Al Shabaab accuses the legislative system, which is embodied in the parliament, for governing according to manmade laws, rather than shari’a, while at the same time criticizing the judicial system for implementing those laws (Al-Shabaab claims that the parliament is a parliament of apostasy).”

“Next,” MEMRI said, “the video details Al-Shabaab’s intensive campaign in the last two years, which focused on targeting members and places affiliated with the judicial and legislative systems in the country.”

The Al Qaeda affiliate said, “that in regard to its campaign against the judicial system, it had managed to assassinate a ‘large number of judges and prominent criminals in the apostasy courts [system],’” MEMRI said. “The campaign, it note[d], culminated in the attack on Somalia’s main court complex in Mogadishu.”

One of the "martyrs" in that attack was the Canadian-Somali fighter Farhan who, the video said, left Canada to join the jihad in Somalia and later "insisted" on participating in a suicide operation.

MEMRI said, “Farhan appears in the video, addressing a brief message in English to Muslim men and women living in the West, calling upon them to join the jihad and to make hijra. He also urges them to never give up but to ‘keep trying’ to join the jihad. ‘I want to speak specifically to the brothers and sisters in the West … make jihad for Allah’s path, make hijra so you can come to jihad … leave the world behind and Allah … will give you something better.’”

The video also detailed the May 2014 attack on the parliament, which was carried out by eight Al Shabaab fighters, noting those fighters’ achievements, as seen in their ability to attack the parliament and engage the army forces at the scene for three hours, MEMRI said. It also stresses that Somalia’s security forces there were very weak.

The parliament attack was led by the American-Somali Al Shabaab fighter ‘Abd Al Rahman Muhammad, who, the video also shows speaking in English and emphasizing that the mujahideen will emerge victorious regardless of the weapons used by unbelievers.

"Lastly, I want to say to you kuffar [unbelievers] … [who] are running around, and they think that with their Hummers and tanks … and their airplanes … and they think this is going to save them … this is not going to save you … [so] bring everything you got, don’t hold back anything, bring everything you got, and we will bring Allah with us, and we will see who will be victorious after that,” Muhammad said.