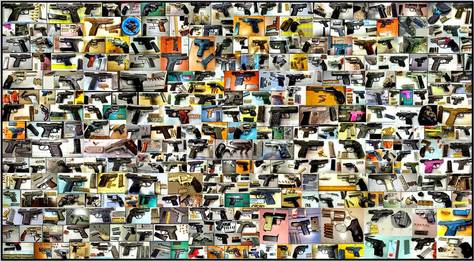 For the fifth year, a record-setting number of firearms, 2,212 — more than six firearms per day –were discovered in carry-on bags at airport security checkpoints across the country, which was a 22 percent increase in firearm discoveries from last year’s total of 1,813, according to the Transportation Security Administration (TSA).

The successively record-breaking number of passengers trying to slip by TSA screeners with a handgun in a carry-on bag comes at a time when the threat of homegrown Islamist jihadists is growing.

Of the 2,212 firearms found in carry-on bags in 2014, 83 percent were loaded and dozens had a round chambered. Firearms were intercepted at a total of 224 airports; 19 more airports than last year.

A record number of firearms discovered in one day was set on June 4, 2014, when 18 firearms were discovered at airports across the country in carry-on bags, breaking the previous record of 13 set in 2013, TSA said.

Among the “artfully concealed” firearms TSA found in 2014 was a disassembled .22 caliber firearm discovered in a carry-on bag at John F. Kennedy International Airport. Various components of the gun were found hidden inside a PlayStation 2 console.

A loaded folding-stock rifle with two loaded magazines was discovered in a carry-on bag at Dallas/Fort Worth International Airport.

A 94-year-old man attempted to enter the checkpoint at LaGuardia Airport with a loaded .38 caliber revolver clipped to his belt.

A loaded 380. caliber firearm was discovered strapped to a passenger’s ankle after walking through a metal detector at Cincinnati/Northern Kentucky International Airport.

A loaded 380. caliber firearm was discovered in the rear pocket of a San Antonio International Airport passenger during advanced imaging technology screening.

The top 10 airports where firearms were found in carry-on bags last year are:

In addition to firearms found in carry-on bags in 2014, TSA screeners also found an Mk 2 hand grenade in a carry-on bag at Los Angeles International Airport, causing the Terminal 1 checkpoint to be closed while the explosive ordnance disposal team transported the grenade to an offsite location to be disrupted. Five flights were delayed more than two hours, affecting 800 passengers.

A homemade avalanche control charge also was discovered in a carry-on bag at Ted Stevens Anchorage International Airport. The FBI responded and arrested the passenger.

A traveler at Gerald R. Ford International Airport-Grand Rapids had a tube in his carry-on bag containing 500 grains of black powder.

TSA’s data on handgun confiscations show owners’ of more than just a few of these handguns “artfully” tried to conceal them, which raises the disturbing question: were these individuals deliberately trying to sneak the guns past screeners?

While TSA attributes the vast majority of the handguns its screeners continue to confiscate to forgetfulness on the part of passengers who simply forgot they’d put a weapon in their luggage before attempting to board a plane, in those instances in which the owners of sidearms clearly tried to conceal their guns from security screeners — some loaded and chambered – nevertheless begs the question about the persons’ intent … and motivation.

Authorities are clearly disturbed by the fact that a decade after 9/11 so many people aredeliberately trying to take a concealed firearm — including handguns that are loaded or chambered — onboard a passenger plane.

They added there’s no logical reason why someone would “artfully conceal” a handgun (or some other dangerous weapon like a knife or incendiary) unless its a premeditated effort to try to smuggle them past TSA screeners. They noted there’s been sufficient efforts to make the flying public aware that concealed weapons — especially guns — are strictly prohibited. It’s not a secret what people are prohibited from carrying onboard a passenger plane.

Photo top: Some of the firearms found in carry-on bags by TSA screeners in 2014.