AQAP’s New Leader Calls for Attacks on US, Calling it Only Enemy of Mujahideen 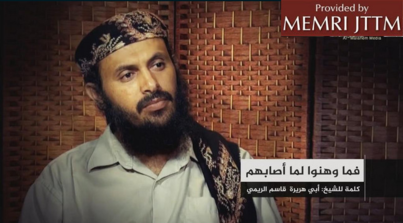 AQAP has been the most successful Al Qaeda affiliated organization in attempting to carry out post-9/11 mass casualty attacks on US soil.

"Oh Americans, what have you done beyond fulfilling the [martyrdom] wish of a knight from the knights of the Muslims?" Al Rimi said, noting that the the mujahideen will ultimately triumph because Allah is on their side.

“Al Rimi points out to them the importance of fighting and defeating the US, saying, ‘You are left with no opponent today besides the unbelieving America,’” said the Middle East Media Research Institute (MEMRI), which monitors jihadi social media sites. “He also adds that if the US is defeated, no one will remain in the mujahideen’s path. Al Rimi thus calls upon the mujahideen to attack the US: ‘Direct and unify your arrows and swords against it [i.e. the US], for Allah has aided you against this enemy.’”

Al Rimi is on the United States’ "Most Wanted" list of terrorists with a $5 million bounty on his head. His name was added to the US list of "most wanted" terrorists in May 2010.

Intelligence Community officials have described Al Rimi as playing "a key role in reviving the regional node" of AQAP.

"In addition to his activities as AQAP’s senior military commander, Al Rimi has played an important role in recruiting the current generation of militants making up the Yemen-based AQAP," according to the State Department.

“I pledge allegiance to you, to listen and obey, in times of difficulty and prosperity, in hardship and in ease, to endure being discriminated against and not to dispute about rule with those in power, and to wage jihad in the cause of Allah the Almighty,” Al Rami said.

“Following Al Wuhaishi’s death, there had been some speculation in chatter, particularly coming from Islamic State (ISIS) supporters, that Al Rimi might end up joining ISIS instead. However, in his message, Al Rimi announces his bay’a (oath of allegiance) to AlQaeda leader Ayman Al Zawahiri, thus refuting any such speculation,” MEMRI said in a report Friday, noting that he “continues the strategy lines of Al Qaeda and of his predecessor Al Wuhaishi, i.e. perceiving the US as the enemy, and its targeting and defeat mandatory for victory.”

He called on the mujahideen to direct their "arrows and swords" against the US in order to defeat it.

According to MEMRI, the main points Al Rami made was declaring his oath of allegiance to Al Qaeda leader Ayman Al Zawahiri, “on his own behalf and on behalf of all other AQAP members. Al Rimi also sent his condolences to Al Zawahiri and to all Muslims for the death of Al Wuhaishi.”

“Addressing the Americans, Al Rimi first downplays the impact that Al Wuhaishi’s killing has on jihad, noting that it was the Al Wuhaishi’s wish to die as martyr, and that killing him would be yielding nothing but the appointment of his replacement,” MEMRI translated Al Rimi as saying.

"Oh Americans,” the new AQAP leader said, “what have you done [is] beyond fulfilling the [martyrdom] wish of a knight from the knights of the Muslims?" Al Rimi stated, adding that the Mujahideen will ultimately triumph [Against America] because Allah is on their side.”

Discussing the Mujahideen, Al Rimi stated they were essenitial to fighting and defeating the US, saying: "You are left with no opponent today besides the unbelieving America." He also added that if the US is defeated, no one will remain in the Mujahideen’s path. Al Rimi thus calls upon the Mujahideen to attack the US: “Direct and unify your arrows and swords against it [i.e. the U.S.], for Allah has aided you against this enemy."

“Addressing the Muslim Ummah,” MEMRI said, “Al Rimi reiterated that jihad ‘is the solution’ to Muslims’ problem. He also calls upon Muslims to support the Mujahideen, and to receive training at their hands.”

Addressing the AQAP Mujahideen, Al Rimi “advised them on matters of character and conduct,” and promise[d] to do whatever he can to bring about the release of Muslim prisoners, naming in particular those held in Guantanamo, Palestine, Egypt, Saudi Arabia and Lebanon.”