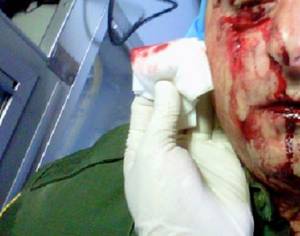 Agents protecting US borders, especially the Southwest border, remain frequent targets of cartels and other dangers, including violent illegal aliens trying to cross the border into the US.

In a new video released by the American Federation of Government Employees (AFGE), Border Patrol agents talk candidly about coming “in contact with people brandishing knives and firearms, barbed wire stretched across the road, vehicles gunning for them and other all-too-frequent hazards.”

“Like most law enforcement officers, Border Patrol agents don’t know what’s in store for them when they head out to work each day. But for agents stationed along the southern US border, the job is especially dangerous,” AFGE stated in announcing the third video in a series of videos called, “Walking the Line,” which highlights “the often harsh realities faced by Border Patrol and ICE agents in securing the southern US border.

“Agents are facing increasing threats from cartels who control each areaof the border and manage the organized smuggling of drugs, people and known criminals across the border,” AFGE said, noting, “They exploit gaps in coverage that occur when Border Patrol agents are responding to a call, assisting an agent who is injured, or dealing with an influx of undocumented immigrants at a single location.”

“In many cases, cartels are the ones responsible for orchestrating the distractions,” the union said.

The most frequent threat to agents is rocks being thrown from across the border, said Shawn Moran, a Border Patrol agent for 17 years who serves as vice president of the AFGE’s National Border Patrol Council. The rock assaults have become so frequent that many agents don’t always report them unless they are injured or government property is damaged.

Homeland Security Today in March published a comprehensive investigative report, Deadly Patrol, about the seriousness of “rockings,” as they are called, and that they can cause severe head, brain and bodily injuries.

In fact, Homeland Security Today’s report pointed out, rock assaults have actually caused a Border Patrol helicopter to crash, and forced another to have to make an emergency landing.

“It is a very dangerous job, and one where you have to remain constantly alert and be able to take care of yourself and make sure you go home at the end of the shift,” Moran said.

“There are some people out there that want to cause harm to you just because of what you do,” said Terence Shigg, president-elect of AFGE Local 1613, which represents about 2,300 Border Patrol agents throughout the San Diego, California Sector.