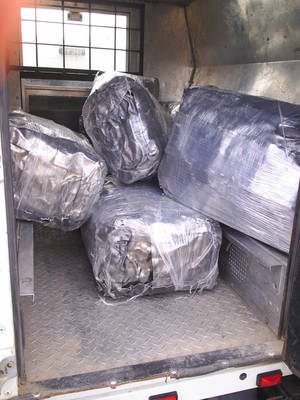 Last fiscal year, Customs and Border Protection (CBP) “did not effectively target and examine rail shipments entering the United States from Mexico and Canada,” and as a result, “CBP may … have failed to detect potential instruments of terrorism or dangerous materials from entering the United States,” according to the Department of Homeland Security (DHS) Inspector General’s (IG) congressionally mandated annual audit report, which was released this month.

Consequently, the IG reported, “We were unable to determine whether all high-risk shipments were examined in accordance with CBP policies.”

“Finally,” the IG reported, CBPOs did not always record the results of their rail cargo examinations in the Cargo Enforcement Reporting and Tracking System (CERTS).”

The ATS is a decision support tool that compares traveler, cargo and conveyance information against law enforcement, intelligence and other enforcement data using high-risk targeting scenarios and assessments. Within ATS is ATS-N, which is a subsystem that evaluates all cargo to identify high-risk inbound cargo for examinations. ATS-N uses numerous rule and targeting criteria to analyze information from manifest, importer security filing and entry data and individuals to prioritize shipments for review, and to generate recommended targets by scoring each shipment.

“CBPOs were unaware of the correct targeting criteria or inadvertently used inappropriate criteria,” the IG’s audit found. “In addition, one port did not have the required radiation detection equipment for its rail team, and CBPOs at two other ports used Personal Radiation Detectors to examine shipments.”

Continuing, the IG’s audit found, “Rail CBPOs also received insufficient training on the use of ATS and CERTS. Finally, supervisory CBPOs did not provide sufficient oversight to ensure CBPOs followed CBP policy. As a result, CBP may have failed to target or properly examine rail shipments that were at an increased risk to contain contraband or dangerous materials. In addition, CBP has no assurance that decisions to release these high-risk shipments into US commerce were appropriate.”

The IG’s random selection of “a sample of 254 high-risk rail shipments from six ports that processed a high volume of the overall FY 2012 and FY 2013 shipments” found that “CBPOs used incorrect targeting criteria on 59 of 254 (23 percent) shipments” it reviewed.

The IG noted that as of August 26, 2009, “ports of entry were required to use specific ATS targeting criteria for threshold targeting,” and that “if the shipment meets or exceeds a specific ATS threshold or score after applying this rail criteria, the shipment is determined to be ‘high-risk’ and subject to examination.”

“CBPOs said they were either unaware of the correct criteria, insufficiently trained in using ATS, or inadvertently used inapplicable criteria,” the IG reported. “Supervisory CBPOs also did not ensure CBPOs were using the correct targeting criteria.”

“As a result,” the IG reported, “CBPOs may have failed to require examination of rail shipments that were at higher risk to contain contraband, dangerous goods or weapons of mass destruction.”

In addition, the IG determined, “CBPOs did not always use the required radiation detection equipment to examine high-risk shipments. Specifically, CBPOs did not use a Radiation Isotope Identifier Device (RIID) on 160 of the 222 shipments (72 percent).”

The IG noted that, “even though there is no specific national rail examination policy, Customs Directive 3340-036A, dated May 2012, requires that CBPOs conduct all mandated ATS targeted examinations using available large-scale non-intrusive inspection (NII) technology. The directive also requires the use of a RIID to fulfill the radiation screening requirement.”

CPB policy requires ports of entry to use NII equipment when examining shipments ATS scores a high risk. Inbound trains pass through a Rail Vehicle and Cargo Inspection System (RVACIS) at most rail cargo ports of entry. The RVACIS uses gamma rays to produce images of railcars for detection of contraband such as drugs, undeclared merchandise … and weapons of mass destruction!

The IG made six recommendations “which, when implemented, should improve CBP’s processing of rail cargo from Mexico and Canada.”

CBP concurred with all of the IG’s recommendations.

US trade with Mexico by rail more than tripled from $20 billion in Fiscal Year 1999 to $69 billion in FY 2013. According to CBP data, during FY 2012 and FY 2013, all ports of entry with rail crossings processed nearly six million cargo shipments.

When rail car screening is used, it works!

For CBPOs, the challenge to examine this amount of rail cargo is daunting, and when it’s done properly and correctly, it works.

For example, during an extended tour and briefing at the Nogales, Arizona Port of Entry in July 2010 by Homeland Security Today, CBP officers discovered six hay-bale-size bundles of marijuana worth many hundreds of thousands of dollars on the street wrapped in lead sheets — the first time bundles of pot had ever been found at the Nogales PoE encased in lead — hidden among cars for importation into the United States on one of the many freight trains that passes through the port.

Port officials told Homeland Security Today they couldn’t explain why the pot was encased in lead sheets, noting it was the first time they’d encountered such wrapping.

As for the freight trains that enter and exit through the port, “We X-ray [with backscatter imaging technology] every train coming in and every train coming out,” Homeland Security Today was told by Nogales Port Director Guadalupe Ramirez. “It was with such imaging that the … CBP officers were able to identify the six bales of pot wrapped in the lead sheets,” which “lit up on imaging like a Christmas tree,” one of the port officials involved in locating the marijuana said.

Narco-cartels are “constantly looking for what they hope will be chinks in our armor, so we have to be cognizant of that so we do not give them any opportunity to believe they’ve identified specific techniques that we use,” Ramirez explained.

Another thing that the Nogales PoE does is to conduct “red team” undercover tests of officers’ abilities to detect and accurately identify suspicious behavior and contraband. Ramirez proudly proclaimed that, “We were the first port to catch them all – first port … And the guys here are phenomenal. My rail team, which consists of four officers and maybe another handful that we use tosupport them, to supplement them … we’ve already made 21 seizures, and we just had another one today.”

And sometimes the contraband is hidden or otherwise concealed “in some pretty nasty stuff, like fish meal,” a CBP officer said. But if there’s evidence that dope is somewhere in it, the Nogales PoE rail inspection team dives into such messes to find it.

These three entry stations screen and process almost 20 million people, more than 3 million passenger vehicles and nearly 300,000 commercial trucks each year, as well as aircraft and passengers at the Nogales International Airport.

Importantly, the Nogales PoE is a significant international trading hub, positioned at the core of the CANAMEX trade corridor connecting western Canada with Mexico’s Pacific Coast and Mexico City. The Mariposa PoE in Nogales is one of the largest ports of entry for fruit and vegetables being imported into the United States from Mexico by both train and truck.

“Seventeen billion in trade comes through this port every year,” Ramirez said, noting that “60 percent of all the fresh produce that’s grown in Mexico that comes into the United States that you buy at your grocery store comes through the Port of Nogales.

“We have a job to do, but we also have to move this traffic” in the interests of cross-border trade. “It’s a very fine line … it’s a difficult balancing act,” Ramirez said, noting that it does put a strain on the manpower he has available for this important PoE.