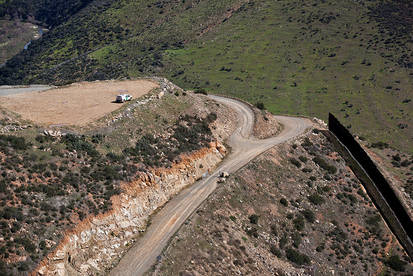 Customs and Border Protection (CBP) has released two Requests for Proposals (RFP) to award multiple contracts and initial task orders (TO) for the design and construction of wall prototypes in response to President Trump’s executive order requiring Department of Homeland Security (DHS) Secretary John Kelly to “take steps to immediately plan, design and construct a physical wall along the southern border, using appropriate materials and technology to most effectively achieve complete operational control of the southern border.”

The first RFP responds to both CBP’s Phase I Concept Papers/Request for Qualifications and Phase II, announced February 24, for a “design-build structure” “pre-solicitation” out of its Indianapolis, Ind., office in advance of the expected formal solicitation “for the design and build of several prototype wall structures in the vicinity of the United States border with Mexico,” to cover the currently more than 1,250 unsecured miles of the US border.

CPB amended its pre-solicitation notice March 3, to provide additional information to interested bidders and due to a revision in strategy based on input received after the original posting.

CBP said in its amended initial announcement it “intend[ed] on issuing a solicitation in electronic format on or after March 8 for the design and build of several prototype wall structures in the vicinity of the United States border with Mexico. Detailed requirements will be included in the RFP, but for planning we anticipate procuring concrete wall structures, nominally 30 feet tall, that will meet requirements for aesthetics, anti-climbing and resistance to tampering or damage.”

“This procurement will be conducted in accordance with the procedures outlined in” the agency’s “Two-Phase Design Build Procedures,” the amended pre-solicitation said, noting CBP intended to issue multiple award Indefinite Delivery Indefinite Quantity (IDIQ) contracts. Some limited number of yet to be determined additional miles are contemplated by the agency to be included by competing the requirements among the successful IDIQ contract holders.

“The intent of this procurement,” CBP explained, “is to acquire and evaluate available wall prototypes and provide some initial construction of some wall segments, but is not intended as the vehicle for the procurement of the total wall solution for the border with Mexico.”

CBP’s March 17 RFP solicitation responds to both of CBP’s earlier Phase I Concept Papers/Request for Qualifications and Phase II RFPs, and “will result in the award of multiple IDIQ contracts for the construction of a solid concrete wall prototype with the capacity to issue future task orders for construction along the American-Mexican border” – i.e.; San Diego, CA to Brownsville, Texas.

The second RFP “will result in the award of multiple IDIQ contracts for the construction of an ‘Other Border Wall Prototype’ with the capacity to issue future task orders for construction along the American-Mexican border … This acquisition is separate and apart from solicitation for the ‘Solid Concrete Border Wall Prototype,’ which is for the acquisition of a prototype using solid concrete materials, in addition to future possible construction along the American-Mexican border.”

CBP said it “will make the award of each IDIQ contract and the first TO simultaneously. The first TO award will be for the design and build of the ‘Other Border Wall Prototype’ and mock-ups in accordance with the Statement of Work. Award of the prototype will satisfy the minimum guarantee of the IDIQ contract.”

The performance period of each IDIQ is for five years from the date of award with the total value of all awarded contracts having a maximum order limit of $300,000,000.

CBP will make the award of each IDIQ contract and the first TO simultaneously. The first TO award will be for the design and build of the “Other Border Wall Prototype” and mock-ups. Award of the “prototype will satisfy the minimum guarantee of the IDIQ contract.

CBP explained that its RFPs are “to acquire multiple conceptual wall designs with the intent to construct multiple prototypes. Prototyping is an industry-tested approach to identify the best solution when considering a new product or methodology. Through the construction of prototypes, CBP will partner with industry to identify the best means and methods to construct border wall before making a more substantial investment in construction.”

“The prototypes will inform future design standard(s) which will likely continue to evolve to meet CBP’s requirements,” the agency announced, adding, “Any and all prototypes will be designed to deter illegal entry into the United States. Through the prototyping process, CBP may identify new designs or influences for new designs that will expand the current border barrier toolkit that CBP will use to construct a border wall system” which is based on CBP’s requirements.

[Editor’s note: For a much more in-depth report on border wall construction programs and other security and surveillance systems on the drawing boards, read the upcoming March/April Homeland Security Today, which focuses on the border and will feature reports on other border security issues and problems]