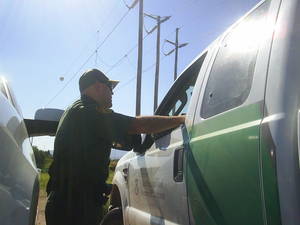 Data indicates arrests of Customs and Border Protection (CBP) personnel for corruption “far exceed, on a per capita basis, such arrests at other federal law enforcement agencies.” And, yet, CBPdoes not have an adequately staffed internal affairs office, and hasn’t had one since CBP was created in March 2003 as part of the Department of Homeland Security, according to the Homeland Security Advisory Council’s Interim Report of the CBP Integrity Advisory Panel.

“This needs to be rectified as expeditiously as possible,” the council’s report stressed.

Out of CBP’s 60,000 employees – 25 percent of all DHS’s personnel — 44,000 are armed law enforcement officers (LEOs) authorized to interrogate, conduct searches and make arrests. 21,000 of CBP’s LEOs are Border Patrol Agents (BPAs) assigned to CBP’s Border Patrol assigned between the nation’s ports of entry, and 22,000 are CBP Officers (CBPOs) assigned to our nation’s 300+ ports of entry, along our land borders and at our seaports and international airports. CBPOs are under CBP’s Office of Field Operations. Given the number of
LEOs within CBP, CBP is the largest law enforcement agency of the United States; larger even than the New York Police Department with 34,500 sworn officers and larger than the FBI with 13,000 Special Agents.

But while the council’s interim report stated arrests of CBP personnel for corruption “far exceed, on a per capita basis, such arrests at other federal law enforcement agencies,” out of a 60,000 member workforce, during the last 11 years “only 176 current or former CBP employees have been arrested, indicted or otherwise prosecuted on corruption charges,” Homeland Security Today was told by CBP Office of Public Affairs Media Division Deputy Director Dan Hetlage.

“In the grand scheme of things, given that our jobs just inherently put us at greater risk than other law enforcement agencies of being bribed or otherwise corrupted, somehow, that’s a really … really … low number of bad apples,” a veteran Border Patrol agent expressed to Homeland Security Today. He was echoed by other Border Patrol agents and CBP Field Operations Officers.

A long-time senior supervisory Border Patrol Agent who has worked all across the US’s southern border with Mexico also told Homeland Security Today that the Border Patrol in particular uses procedures and practices he couldn’t talk about from the outset of initial screening and vetting of a candidate all the way through hired agents’ activities on the ground.

“Investigations of corruption within CBP, to the extent they occur, have been undertaken outside of CBP, principally by the DHS Office of Inspector General [IG],” the report said, which has resulted in “investigations [that] are nearly all reactive and do not use proactive, risk analysis to identify potential corruption. Moreover, they often take far too long and are conducted without the ability of the [CBP] Commissioner to prioritize them.”

They also “often occur without any visibility of the commissioner into ongoing corruption investigations involving his own agency.”

And, “Until this is reversed,” the advisory board’s report stated, “CBP remains vulnerable to corruption that threatens its effectiveness and national security.

The council’s interim report said, “Every border agency in the world is vulnerable to bribery and corruption; arguably more so than any other type of law enforcement agency, federal, state or local, and CBP is no exception. Indeed, corruption is the Achilles heel of border agencies.”

The report said the “mere perception of widespread corruption does irreparable damage to the agency’s reputation for integrity and causes other agencies to refuse to share information essential to effective border enforcement and interdiction. The threat of corruption cannot be  gainsaid. There are major drug trafficking and smuggling organizations — transnational criminal organizations (TCOs) that operate on both sides of our borders — that have budgets in the tens of millions of dollar for bribes and corruption of government officials. The need to assure integrity within CBP, therefore, is one of its paramount priorities.”

“An adequately staffed internal affairs component within the border agency, reporting to the agency head, is not only an internationally recognized anti-corruption best practice,” the interim report stated, “but it is an indispensable tool, along with a functioning disciplinary system, to containing, reducing and deterring corruption.”

Moreover, the council said, “As part of its international role, CBP is in the awkward position of teaching professionalism and integrity to foreign customs and border agencies around the world, including the need for a robust internal affairs capability.”

The report noted that, “Over the past decade, the number of allegations of corruption involving CBP employees, both Border Patrol Agents and CBP Officers at the ports of entry, may be increasing, as has the public perception, through the media, of increasingly pervasive corruption within CBP’s ranks.”

The “genesis” of the problem, the council reported, is because CBP’s predecessor, the US Customs Service, “had an effective internal affairs office [that] was decimated as an inadvertent, unintended consequence of the homeland security reorganization of March 2003. As part of the reorganization, all 3,400 Customs Special Agents (1,811 criminal investigators) were transferred from Customs/CBP to Immigrations and Customs Enforcement (ICE),” adding that, “Because 180-200 Customs Special Agents had been assigned to Custom’s Office of Internal Affairs, CBP was left on March 1, 2003 with no internal affairs investigators.”

Consequently, CBP has had to rebuild its internal affairs capability, “but it is still far below what is needed,” the council said. “Currently, CBP’s Office of Internal Affairs is woefully understaffed. CBP has approximately 218 Internal Affairs investigators for a workforce of nearly 60,000 employees, 44,000 of whom are law enforcement officers.”

As the interim council report noted, “CBP has 218 criminal investigators authorized for its Office of Internal Affairs,” and, “This is not a sufficient number. Indeed, the failure to adequately staff CBP Internal Affairs with sufficient [GS-1801] criminal investigators to promptly and thoroughly investigate allegations of internal corruption and other serious misconduct leaves CBP with an enormous vulnerability: the risk of systemic corruption and potential scandal.”

“It is important to bear in mind that the CBP Commissioner is responsible and accountable for the integrity of CBP personnel,” the council’s report continued. “Indeed, no one within DHS has a greater institutional interest in preventing, ferreting out and staunching corruption within CBP’s ranks than the commissioner.”

“The commissioner must have visibility into and oversight over investigations of corruption and other serious misconduct, and the authority and resources to see that investigations are prompt and thorough,” the report stated. And, “For this, CBP needs an adequate staff of competent criminal investigators in CBP’s Office of Internal Affairs, headed by an Assistant Commissioner for Internal Affairs, who reports directly to the [CBP] commissioner.”