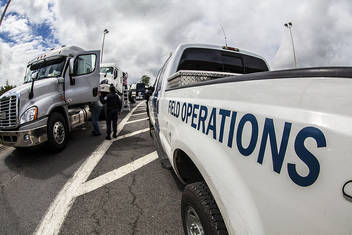 Nine tentative public-private partnerships have been selected for new reimbursable services agreements to promote economic growth in cross-border trade and travel across the country, Customs and Border Protection announced.

“The sustained growth in the volume of international trade and travel through the nation’s ports of entry is a great benefit to the US economy, but it also requires investments in infrastructure, technology and staffing,” said CBP Commissioner R. Gil Kerlikowske. “Today, we are delighted to have nine new public-private partners who are committed to investing in America’s economic prosperity.”

CBP said, “Since the program began in 2013, CBP has entered into agreements with 20 stakeholders, providing more than 93,000 additional processing hours at the request of our partners—accounting for the processing of more than 2.3 million passengers and nearly 370,000 personal and commercial vehicles.

Among the participating airports, additional staffing and supplementary lane openings in conjunction with Automated Passport Control deployments and other innovative technology efforts have helped decrease wait times by an average of almost 30 percent while traveler volume has increased about 7 percent over the last year, CBP stated.

“Section 559 of the Consolidated Appropriations Act of 2014 expanded CBP’s authority to provide new or enhanced services on a reimbursable basis by allowing CBP to create partnerships with private sector and government entities,” the agency said, adding, “Reimbursable services under Section 559 include customs, agricultural processing, border security services and immigration inspection-related services at ports of entry.

The statute maintains several limitations at CBP-serviced airports, including a maximum of five reimbursable service agreements permitted per year, and reimbursable services being limited to overtime costs. Section 552 of the Department of Homeland Security Appropriations Act of 2015 amended Section 559 to include support services at airports.

The entities tentatively selected for these partnerships are:

These “reimbursable services authority is a key component of CBP’s Resource Optimization Strategy, and will allow CBP to provide new or expanded services at domestic ports of entry reimbursed by the partner entity,” CBP stated.