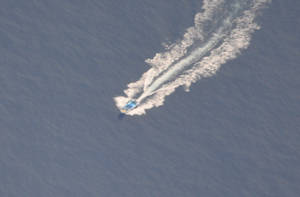 Five separate incidents during the last week of May in the Pacific Ocean near Central America resulted in Customs and Border Protection (CBP) Office of Air and Marine (OAM) agents working as part of Operation Martillo interdicting several tons of cocaine worth more than $441.8 million, CBP announced.

“The following day, the same crew detected a two-engine panga heading north from El Salvador,” CBP said. “The boat appeared to be carrying 16 fuel barrels and packages. The CBP crew contacted a US Coast Guard cutter also supporting JIATF-S to intercept the boat. Before the cutter could reach the vessel, its crew began dumping packages and changing its course of direction.”

The Coast Guard recovered more than 700 pounds of cocaine that was dumped overboard.

According to CBP, the next interdiction occurred May 30 when the CBP crew was operating its P-3 AEW in open waters southwest of the Guatemala and El Salvador border.

“The crew detected a go-fast boat with 10 fuel barrels and multiple other containers aboard,” CBP stated. “The CBP crew obtained visual confirmation of the suspect vessel and relayed the information to JIATF-S. A US Coast Guard cutter was deployed to the scene and arrested the vessel’s crew of four, seized the vessel and recovered more than 1600 pounds of cocaine.”

The following day, May 31, a CBP crew detected two twin-engine panga boats navigating in open waters near El Salvador. The first panga was heading in a northwesterly direction away from El Salvador. The CBP crew notified JIATF-S who deployed a Coast Guard cutter to the area and after using disabling fire boarded one of the panga boats. The boat’s crew of three were apprehended and the vessel with more than 1,700 pounds of cocaine were seized.

Just hours later, the CBP crew detected the second twin-engine panga navigating in the open waters southwest of El Salvador. The CBP crew contacted a Coast Guard cutter which deployed a helicopter. The Coast Guard crew aboard the helicopter fired warning shots and the boat crew came to a stop. The crew aboard the panga threw more than 1,200 pounds of cocaine overboard.

“Our CBP P-3 crews are among the most efficient at detecting boats navigating in open waters and attempting to avoid identification,” said National Air Security Operations Center-Corpus Christi Director John Wassong. “We continue to actively supporting JIAT-South as part of Operation Martillo by patrolling 42 million square miles of open waters to disrupt narcotics smuggling before those drugs reach US shores.”

Operation Martillo involves the participation of 15 nations that work together to counter transnational organized crime and illicit trafficking in waters along the Central American isthmus.

CBP said OAM P-3s have been an integral part of the successful counter-narcotic missions operating in coordination with JIATF-South. The P-3s patrol in a 42 million-square mile area which includes more than 41 nations, the Pacific Ocean, Gulf of Mexico, Caribbean Sea, and seaboard approaches to the United States.

In Fiscal Year 2014, CBP’s P-3s operating from Corpus Christi, Texas, and Jacksonville, Florida, flew more than 5,900 hours in support of counternarcotic missions resulting in 135 interdiction events of suspected smuggling vessels and aircraft. These events led to the total seizure or disruption of 126,489 pounds of cocaine with an estimated street value of $9.47 billion.

Photo top: This go-fast vessel was moving at a high rate of speed May 29 before a CBP P-3 crew led Costa Rican authorities to its location.

Share
Facebook
Twitter
Linkedin
Email
Previous articleHow to Check the Box … and Box-out the Hackers – Identity has Become the New Security Perimeter
Next articleObama on ISIS: ‘We Don’t Yet Have a Complete Strategy’