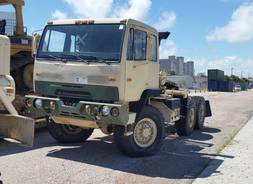 Two military trucks — a 1999 Stewart Stevenson and a 1990 BMY M931A2 — which were shipped separatelyand both bound to Guatemala were seized by Customs and Border Protection (CBP) officers at the Galveston, Texas seaport while conducting vehicle examinations for export earlier this month.

When CBP officers searched for the required export license for the Stewart Stevenson military truck, the information retrieved identified that the export license was not available.

“The exporter later admitted a license was not issued for the vehicle’s export,” CBP said.

The second vehicle, the 1990 BMY M931A2 military truck, was also encountered at the Port of Galveston seaport set to be exported. But once again, when CBP officers checked for the required export license, it was also not available, and, “The exporter admitted the shipment did not include a license to export the vehicle.”
“CBP is the last line of defense in the export control process,” said CBP Port Director Dave Fluty. “Recognizing the significance of our role, we take every opportunity to use our authority to inspect, search, detain and seize goods set to be exported illegally or without the proper authorizations.”

“When we identify shipments set for illegal export or without the appropriate authorizations, we work with the trade industry in an effort to resolve legitimate errors and we also work with various federal, state and local law enforcement authorities to ensure unauthorized or illegal exports are seized and disposed of in the proper manner,” Fluty said.

Export licenses for these types of shipments are obtained through Department of Commerce.