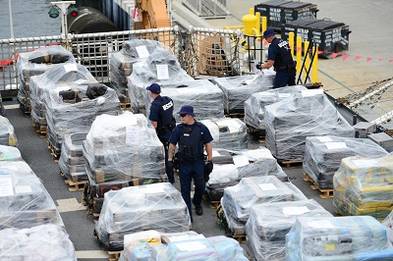 More than 66,000 pounds of cocaine worth $1.01 billion wholesale was seized by the US Coast Guard, the Guard announced as the crew of the Cutter Stratton offloaded 34 metric tons of cocaine seized in the Eastern Pacific Ocean in 23 separate interdictions by Coast Guard cutters and Coast Guard law enforcement teams operating in known drug transiting zones.

The crew of the Cutter Stratton interdicted or disrupted 15 different drug smuggling attempts since April, including another self-propelled semi-submersible vessel carrying 5,460 pounds of cocaine June 16. Coast Guardsmen aboard the Stratton have seized more than 33,000 pounds of cocaine worth more than $540 million wholesale since May 2015.

This is the first interdiction of two semi-submersibles in a single patrol at sea where CoastGuardsmen recovered both the narcotics and the vessels. Coast Guardsmen from the Cutter Mohawk from Key West, Florida interdicted two semisubmersibles in the Caribbean in 2011; however, both vessels sank during the course of the interdiction.

“This is about more than just trying to keep drugs off US streets,” Zukunft said, adding, “The cultivation, trafficking and distribution of narcotics fuels violence and instability throughout the Western Hemisphere, leaving a path of destruction directly to the door step of the US. We must continue to make progress in our effort to combat transnational organized crime networks to ensure safety and security in our hemisphere.”

An announcement released Monday stated that, “Transnational organized crime groups are vying for control of illicit trafficking routes and power in numerous Latin American countries, resulting in increased violence and instability. This has led to record high homicide rates in Central and South America, as well as the Caribbean; 8 of the 10 countries with the highest homicide rates in the world are in this region. More than half of the unaccompanied children that crossed the US southern border last year suffered or faced harm from organized crime groups, qualifying for international protection.”

“There is still work to be done. We can only act on 30 percent of known drug shipments in the Eastern Pacific and Caribbean,” Zukunft said. “We must increase already hard earned momentum to curb the rising tide of crime, violence and instability in our hemisphere.”

The more than 66,000 pounds of cocaine is equal to about 33 million lines of cocaine or 336 million hits of crack, according to Drug Enforcement Agency (DEA) estimates.

Numerous US agencies from the Departments of Defense, Justice and Homeland Security are involved in the effort to combat transnational organized crime including the Coast Guard, US Navy, Customs and Border Protection, FBI, DEA, ICE, US Attorney’s Offices in California, New York, Florida and Puerto Rico, and US intelligence agencies. Allied and international partner agencies also have played an important role in counter drug operations.

During at-sea interdictions in international waters, a suspect vessel is initially located and tracked by allied military or law enforcement aircraft or vessels. The actual interdictions, including the boarding, search, seizures and arrests, are led and conducted by US Coast Guardsmen.

The Coast Guard has increased US and allied presence in the Eastern Pacific Ocean and Caribbean Basin, which are known drug transit zones off of Central and South America, as part of its Western Hemisphere Strategy.