Danley is a two-time recipient of the U.S. Customs and Border Protection Commissioner’s Award for Mission Integration and for Partner and Stakeholder Engagement. 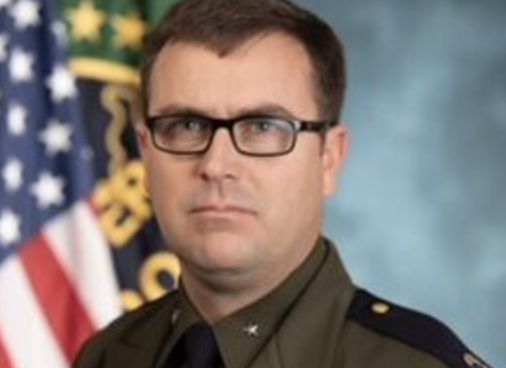 Robert B. Danley has been appointed as the new Chief Patrol Agent (CPA) of the Detroit Sector Headquarters. Chief Danley officially took over as Chief Patrol Agent on March 27, 2022, and succeeds Chief Douglas Harrison, who recently retired after commanding the sector for five years.

CPA Danley initially entered on duty with the 460th session of the United States Border Patrol Academy in 2001.  He was initially assigned to Brackettville Station, in the Del Rio Sector, TX. Throughout his career, CPA Danley has held various leadership positions on the northern and southern border, as well as at the Border Patrol Academy and USBP Headquarters.  He has led operations as a Patrol Agent in Charge, Associate Chief, and Acting Deputy Chief.

CPA Danley is responsible for the Border Patrol’s priority mission of preventing terrorists and their weapons from entering the United States, and its traditional mission of border and immigration enforcement activities in the Sector’s area of responsibility. Detroit Sector consists of five Border Patrol Stations along 863 miles of the international border with Canada, and encompasses the states of Michigan, Ohio, Illinois, and Indiana.

CPA Danley is a two-time recipient of the U.S. Customs and Border Protection Commissioner’s Award for Mission Integration and for Partner and Stakeholder Engagement. He earned the Secretary, Department of Homeland Security Meritorious Service Silver Medal for Leadership for his creation of migrant pathways in 2020. He received his Bachelor of Science in Justice Studies from Northern Arizona University.