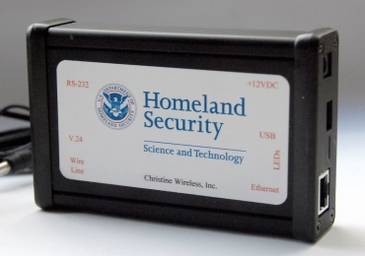 The Radio Internet Protocol Communications Module (RIC-M) is a new low-cost interoperability solution developed by the Department of Homeland Security (DHS) Science and Technology Directorate (S&T) that could save the first responder community millions of dollars,” DHS announced.

RIC-M can be used by local, state and federal responders as a low-cost, external, stand-alone interface that connects radio frequency (RF) system base stations, consoles and other RF equipment – regardless of brand – over the Internet or Private Internet Protocol (IP) network.

According to DHS, “The RIC-M converts from a commonly used V.24 serial communications protocol to anopen-standard Voice-over-Internet-Protocol (VoIP). Both encrypted and unencrypted Project 25 (P25) digital communications are supported, and it can also operate with analog communication equipment.”

“In the past, legacy systems were not interoperable,” explained S&T First Responders Group (FRG) Program Manager Christine Lee. “If you bought one brand of base station, you had to buy the same brand for the all other components even if other brands offered more economical choices or better options. RIC-M allows first responder organizations to be free from dependence on expensive, single-vendor communication solutions, offering cost savings and wider variety.”

Lee emphasized that base stations are used by law enforcement, medical and other agency dispatchers to communicate with first responders and agents in the field. Using the RIC-M, agencies can easily upgrade and reconfigure legacy systems for less than $500.

“Instead of having to replace an entire system – which can cost as much as $15,000 – when one component breaks or becomes obsolete, organizations can use any RIC-M compatible product to extend the system’s life for another 10 to 20 years,” Lee said.

Since its conception in 2012, DHS said, the RIC-M has been successfully field tested with various state and federal response agencies including Montgomery County, Maryland; Customs and Border Protection; Federal Protective Service; the FBI; US Marshals Service; Department of Justice and Department of the Interior Office of Law Enforcement and Security.

“The biggest benefit of the RIC-M is that it will allow agencies continue to use current stock pile and installed legacy equipment,” said Carter Blumeyer of Rivada Port Graham Solutions who participated in the fielding as an evaluator. “This legacy equipment is solidly built and still could last more than 10 years from now.”

In addition, DHS said, S&T plans to provide licensing agreements with other vendors to commercialize RIC-M.